Much Ado about Nothing, Watching the Shakespeare’s Globe Production
3 comments
Share:FacebookTwitter
EducationHome schoolingPoetryShakespeare

Much Ado about Nothing, Watching the Shakespeare’s Globe Production 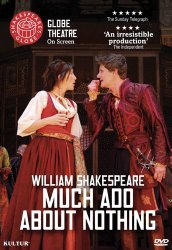 I had planned to try to get back into the school groove today after taking last week as a holiday. A little math, a little reading, not too much, but trying to re-establish some routines. But Bella has developed a rash around her mouth. Saturday we thought she was just chapped, but today it looked swollen and I could see little tiny bumps. It looks just like my mouth looks when I’ve had mango. Anyway, the poor girl was being driven to distraction and I know exactly what that feels like. Who can focus.

So I declared that we were not going to do any school work. Instead we tidied up the breakfast things and then settled in to watch the Much Ado About Nothing

dvd that Bella got for Christmas. It was a two disc film and with our late start and a long break for lunch and putting Lucy down for a nap it took up the better part of the day. We didn’t do anything else, really. Not even any read alouds. But it’s Shakespeare so that totally counts for a whole day of school. I remember plenty of days when teachers would put on a movie and that’s all we’d do. Totally counts.

This is the Shakespeare’s Globe production, filmed live at the Globe theater in London. I love the way you get a real sense of the play as a play and the audience as being there, a part of the experience. At one point Beatrice reaches down and grabs some guy’s hands as she’s talking, at many points you can see audience reactions. It’s even raining in this performance and all the groundlings are wearing rain gear– the stage is half wet and half dry where the roof covers it– and the cast gave some nice ad libs about the weather.

For kids encountering Shakespeare for the first time, these productions are the way to go. I’m not averse to good modern adaptations, but for introducing kids to Shakespeare, I really like these which try to stick to the kind of staging you’d have seen in Shakespeare’s day rather than making it more like a movie. And we spent some time learning about the Globe theater, both the original that Shakespeare acted in and the reproduction built in the 90s, so it is a treat to see the plays on stage in that theater. I think the play is easier to follow in a stage version.

The problem with most stage to screen productions that I’ve seen is that the sound and film quality are often low. The quality in the Shakespeare’s Globe productions is top notch (Judging not only by the two complete films we’ve seen, but also by the previews of the other films.) The film direction is very good, the cuts feel natural, not too jumpy, just enough close ups and long shots and brief audience reaction shots. It feels about like what your eyes would naturally do if you were there, except less constrained to a particular point of view since there are multiple cameras.

The costuming is excellent. It’s very Shakespearian. So are the musical instruments– the musicians are in the gallery and are very much a part of the production, it’s nice to see how that works as well, the music as part of the performance.

As we watched I mused on how Shakespeare really likes plots about innocent women who are thought to be guilty. Are there any plots about men suspected of sexual misconduct who are innocent?
And they all either have strong sexual undercurrents or lots of death. Or both. I’m not sure there’s any Shakespeare play that is truly “kid friendly”. All of them have very adult themes and concerns. And so my explanations of what’s going on necessarily gloss over some of the finer points. We talked about slander but not about the particulars of how Hero is slandered. All the innuendo of course goes right over the kids’ heads. But we can talk about telling the truth about other people and how lies can hurt as much as physically killing someone.

Here’s another place where stage versions are superior for kids. Cinematic versions often feel the need to get a bit too graphic, they explicitly show the sexual transgressions that the stage versions only hint at with lewd gestures that go completely unnoticed by small children.

On the whole I liked this interpretation of the play. I really need to see it again because many times I was distracted by small wiggly children. I especially liked the scene of Hero’s death. And I thought it really captured the darkness at the heart of the play, the horrific betrayal. I liked that the women really take revenge on Claudio before allowing him to be reunited with Hero. He’s blindfolded and slapped and pushed around, it was really quite satisfying. It was satisfying that Hero remained dressed in black through the final scene, a reminder that she is still in a sort of mourning, all is not exactly as it was before. There’s a profound nhurt there.

I liked Beatrice and Benedick, though I thought at times they felt a little derivative of Branagh and Thompson’s cinematic performances. Dogberry also seemed to make a few nods to Michael Keaton’s performance. I was surprised at how moved I was by Antonio’s reproach of Claudio, a speech I don’t even remember from other performances. It was cutting and yet it also seemed to presage Lear’s powerlessness. Very tragic.

The one thing I’ve never really seen referenced in a production of Much Ado is what exactly Claudio is to make of Benedick stepping back to let him marry Beatrice in reparation for his slander of Hero. Is Claudio supposed to just forget all about the Benedick and Beatrice romance he himself has helped to promote? It’s a very odd moment that the productions I’ve seen seem to ignore.

As we watched I definitely noticed the timing of the comical bits, how they provide necessary relief after the heavy hitting scenes that follow the slander of Hero plot.

The children loved watching the movie. Even Anthony and Ben watched the whole thing, though they naturally were distracted at many points during the show. They chat and ask questions and roll around and climb on each other. It’s not really very peaceful, but I figure they’re absorbing Shakespeare. And it was a very effective diversion for poor miserable Bella who said she never noticed her mouth as long as the play was going on.

Bella and I had read an abridged version of the play some time ago and so she had a basic idea of the plot. Sophie and Ben and Anthony did not. Bella spent some time this afternoon digesting the play and then came and chatted at me while she tried to sort it all out. She very much enjoyed it, especially the comical bits, and I’m sure we’ll be watching it again and again.

Other Posts about enjoying Shakespeare with kids:

Starting with Shakespeare Part One