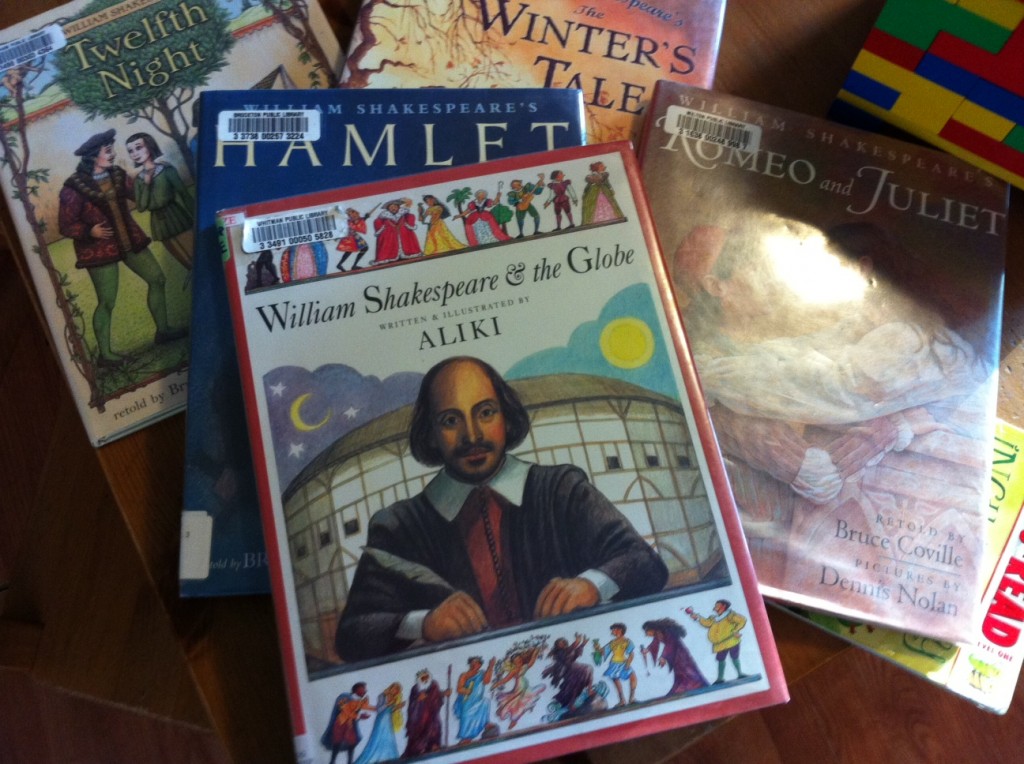 First, my usual caveat: I’m not an expert in anything. I’m just a mom with five kids, a couple of English degrees, and a very, very little experience teaching college level English. This blog is my chronicle not of what has been proven to work but of what I’m currently trying. These are more akin to lab reports than to published peer-reviewed articles. But since there’s been curiosity from various quarters about how I’m introducing my kids to Shakespeare, I’ve daringly decided to tell you what I’ve tried. With a little of my thoughts about the why, but again keeping in mind that this is only my speculation and ongoing experimentation, not the result of some kind of expertise or a time-tested method.

For now I’m skipping over the post about watching and performing Shakespeare to look at putting Shakespeare in his historical and cultural setting. This might be less important for younger kids, but for Bella, the history nut, I really wanted to hook him into the specific time and place: Elizabethan England, Stratford, London, the English Renaissance, the Age of Exploration. And, yes, the Globe.

So we started off with the chapters on Shakespeare in the history books: Story of the World, People in History

. (I really, really like People in History.) Then we went to the library and found a couple of great picture books about Shakespeare and his world:

Bard of Avon: The Story of William Shakespeare

by Aliki. A gorgeous book that first tells the story of Shakespeare’s world with a brief biography, maps of London, discussion of the theaters and the acting companies and then in the second part tells the story of Sam Wannamaker and the building of the new Globe theater in London. The pictures are lovely, the text informative but also easy to read and captivating for young readers. My three year old, Anthony, has requested it as a bedtime story. It got lost for a while because Ben, the five year old, had it hidden in his bed so that he could look at the pictures. This one might need to be added to our collection.

. I got it from the library and mentioned it to Bella but she didn’t seem all that interested. I decided to pre-read it myself and enjoyed it pretty well. But I decided not to read it to her at this time. As I explained to her, I didn’t see anything objectionable in it that I would have a problem reading to her. But I did think it was the sort of story she might not enjoy right now. She gets quite overwrought with stories about characters who break the rules and heavy moral tension really bothers her. I didn’t think she’d enjoy a story about an apprentice who is coerced to steal the script of Hamlet. She’d have been purely miserable. And I didn’t think the book so worthwhile as to force the issue. Probably next time through Shakespeare she’ll enjoy it more. (It looks like there are two sequels. Fun. I’m definitely going to check them out!)

We watched some videos that helped give us a bit of perspective too.

Shakespeare’s Original Pronunciation, this is a great video about reconstructing the original pronunciation of the plays. A father and son recite speeches in modern and original pronunciation while walking about the reconstructed Globe theater. Warning, you might want to preview this. The last example explicates a pun that turns out to be a rather naughty sex joke that totally went over my kids heads but you might want to mark the time and end the video early so you don’t have to answer questions about whores and rape.

A nice little documentary about the Globe: Shakespeare’s Globe Mini-Doc. A bit too much talking about the plays and frustratingly short clips of the plays themselves, but you get a flavor for what they are like. This is the film that made Bella want to watch The Merry Wives of Windsor.

Walking tour guide to the Shakespeare’s Globe Theatre London. This one was too short and the guide is rather annoying, but it’s short and held the kids’ attention and gives you a sense of the Globe.

The first part of Henry V by Sir Lawrence Olivier is also a great resource as it opens with a pan over a model of London and a reconstruction of the Globe and then a scene showing the audience arriving at the theater and the play starting. After having read the Globe book, Bella was thrilled to see the play taking place.

I wonder if there are selected scenes from Shakespeare in Love that might work too. Obviously, there are plenty of scenes that aren’t child friendly, but I might see what I can find by way of shorter clips.

Next time I’ll look at other videos of performances and maybe talk a bit more about memorization of scenes.

Bumping up from the comments, Stephanie writes: “A MOOC ‘Shakespeare and His World’ has just started last week. It is a collaboration with the Shakespeare Birthplace Trust and the University of Warwick. So far it is very good. It is free and you can start and stop any time.
https://www.futurelearn.com/courses/shakespeare-and-his-world-2”

I signed up and watched the first few videos. The one on the baptismal registry was quite interesting. The one on his marriage mentions that Anna Hathaway was already pregnant when they were married. I’m not sure I want to get into that just yet. The one on the ring is rather speculative but does conclude that the interest in it is mainly in showing the enormous popularity of Shakespeare, not as an actual relic of him.

Also, we did watch the Romeo and Juliet prologue scene from Shakespeare in Love this morning. I wish the clip were a bit longer. The one I found that was dubbed (in Spanish I think) included more of the street scene of the crowd rushing to the theater. Since we were reading the Coville Romeo and Juliet last night, it worked well. I like that it shows a little backstage action of the actors getting ready and the bit about Sam’s voice changing so that he can’t play Juliet is hilarious. Note: I would not show Shakespeare in Love to kids. Nudity and inappropriate themes. But selected scenes might be ok. https://www.youtube.com/watch?v=T3PIhGgtWTs