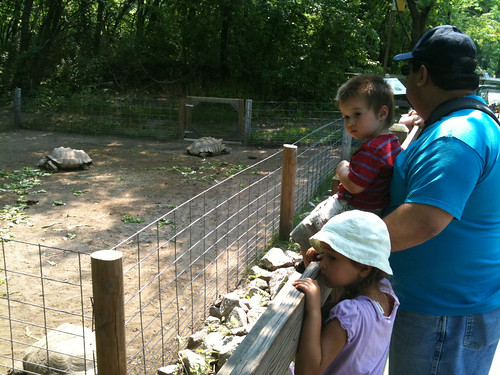 The problem with Ben and bedtime got only marginally better when the antibiotics had taken care of the ear infection. For a couple of nights it seemed like we might get back on track. He even agreed one night to lie down in his bed and stay there—so long as I kept the door cracked open until after he’d fallen asleep. Charlotte suggested that it might be that he needed a very strict routine such as her son had craved. But we have had a fairly strict routine in place since Sophie went through a similar stage at about the same age. It’s very codified because Sophie won’t let me change it an iota and even Bella has fastened upon it and now insists on all the details being just so. Heaven help me if she drifts off while I’m singing their lullabies and misses a song. If she wakes up and realizes it I have to sing it again.

But Ben seems to hate routine. If one thing works it will only work so many times and then suddenly it loses its effectiveness. For a while he craved “Jesus loves me” as his lullaby. Then suddenly he started screaming if I began to sing it. If he falls asleep to the sound of the rosary for a week or so, the next week he rants and raves as soon as I try to pray a rosary.

And he seems to need conditions that are directly contrary to what Sophie and Bella need. They have to have it dark. Lights out and door shut. They have to have me sit in the chair and sing. He wants the lights on, the door open, me on the floor.

So finally it occurred to me tonight that maybe it isn’t so much that he hates routine as much as that it isn’t his routine. It’s their routine and he wants to take ownership, to have some control. It isn’t enough for me to try to devise something that will “work” because that’s still somehow my attempt to control him.

Perhaps what he needs is something that is uniquely his. Something that his sisters, his daddy, his mommy, his baby brother don’t control. And putting his foot down and throwing a tantrum is often the only way he can exert control.

So tonight at bedtime he initially wanted me to read him a book, but when it became reading to him and Sophie he just gave up and went to play with his cars on the coffee table instead. Then after I’d finished Sophie’s book, he brought me another book but as soon as I picked up a fussy Anthony and proposed to read to him while Anthony sat on me lap, he lost interest and went back to his cars. So when Anthony was done nursing I handed him over to Dom and once again tried to give Ben my full attention but by that time he’d given up on books as both of his choices had already been read to his sisters while he listened and played with his cars. What’s the use? he seemed to be saying.

But while I tried to negotiate with him he suddenly seemed interested in talking to me. First, he wanted to talk about the zoo. Then suddenly he wanted me to go. I thought he was trying to say he wanted to go back to the zoo. But he seemed to want me to go now. I suggested that and Bella and Sophie went into a panic at the suggestion that I might leave. I calmed them down and then pressed on because at least Ben was engaged with me. He went back to talking about the elephants and the zoo and wanting to go and the elephants getting a bath and wanting to go. So I started to get that he just wanted to talk about the day but was frustrated that his sisters kept interrupting and perhaps also that he didn’t have the vocabulary to really discuss whatever it was about the zoo that he wanted to discuss.

By this time Sophie had fallen asleep next to me on the couch and Bella was visibly and vocally tired and frustrated with this delay in the bedtime routine. So I suggested to Ben that I would put Sophie into her bed and that then we could cuddle and chat about the elephants and the zoo. He wasn’t happy about the compromise, but eventually agreed that we could talk elephants in his room. So I carried Sophie in and tucked her into bed and herded Bella into her bed. Ben fussing about each delay and me calming him down with renewed promises to talk about elephants. I turned out the lights and he fussed but I said I was going to talk elephants with him but his sisters needed the light off to sleep. And I offered him renewed control by asking if he wanted me to sit in the chair or on the floor. He chose the floor and gave in about the light.

I left the door open and Bella complained and I explained to her that Ben had compromised about all he could handle and that she could either have the door shut but not be able to hear her songs over Ben’s cries or she could have the songs and a quiet Ben but have to put up with an open door. She gave in and accepted the open door for the sake of her songs. I praised her for compromising with Ben.

As I started in on the songs Ben tried to settle in on my lap. I put his blankets over his legs and then eventually he decided he wanted to lie down on my knee. It took him forever to toss and turn into a comfortable position. He reminds me of a dog or a cat trying to find just the right spot. But since he seemed to be settling, I dragged out the songs, singing every single verse of Amazing Grace. By the time I was done with our usual roster of songs he was pretty still in my lap. He seemed well beyond the need to talk about elephants and ready to fall asleep if given something not too engaging to listen to.

So I knew the rosary was out and so were any more songs and so was the litany of the saints. They’d all worked in the past but he was wise to my ways and wouldn’t be fooled again. I decided to try something new to him and started in on my modified Compline that I used to say with Bella. Those prayers really are the perfect way to end the day and ease into sleep. Sure enough he snuggled in a bit and lifted his hand to grasp mine. I held it to my chest as I recited the prayers quietly, slowly, savoring the rhythm and the meaning.

The tension eased and his breathing slowed. He wasn’t quite out when I came to the end. I added every Marian antiphon that I know, except the Hail Mary which I thought might agitate him as being too familiar. Then I prayed the Guardian Angel prayer, then the St Michael Prayer, then the Anima Christi. Finally I ended with the parts of the Divine Praises that I can remember (I don’t know it all by heart) repeating them over and over again in different order each time so that it became a sort of endless litany. Finally he was limp in my lap and I was able to lift him into his bed.

I hope he doesn’t wake up in the night furious because we never had our elephant conversation.