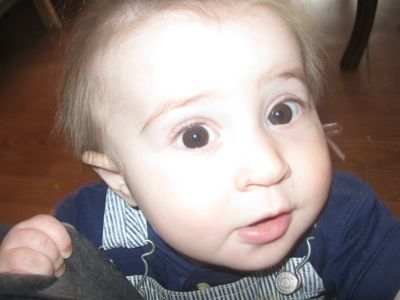 Today at my sister-in-law’s house Ben fell asleep while nursing. I really wanted to hold my new niece so I let my sister-in-law talk me into trying to put him down in the toddler bed. He slept for more than an our (and I got to hold the sweetest little baby!).

Emboldened by that success, I decided to try to put him down in the office in the portacrib tonight. He’s been sleeping in the bassinet in our room and co-sleeping with me after I go to bed; but the waking every two hours or so is starting to really get to me. So though he’s never been in the portacrib before I feel it’s worth a shot.

I nursed him down to sleep around 8 and then laid him down. He woke as I put him down but went back to sleep within five or ten minutes. He slept for two hours and then I nursed him down again. This time he fell back asleep quickly and didn’t stir when I laid him in the portacrib.

So we’ll see how this goes. I’m hopeful that not being so near to me he might sleep for a little longer stretch. It’s at least worth a try.