On Trying to Write Formal Poetry 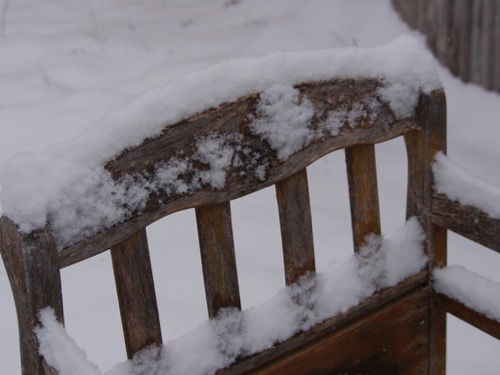 I will put Chaos into fourteen lines
And keep him there; and let him thence escape
If he be lucky; let him twist, and ape
Flood, fire, and demon — his adroit designs
Will strain to nothing in the strict confines
Of this sweet order, where, in pious rape,
I hold his essence and amorphous shape,
Till he with Order mingles and combines.
Past are the hours, the years of our duress,
His arrogance, our awful servitude:
I have him. He is nothing more nor less
Than something simple not yet understood;
I shall not even force him to confess;
Or answer. I will only make him good.
—Edna St Vincent Millay

I love formal poetry. I always have. But I love free verse too. I’ve never really understood the battle, (which appears to have become some kind of entrenched warfare in some circles). But apart from some very faltering attempts at rhyming verse when I was younger, I mostly gave up on trying to write formal poetry. Since college, maybe, I pretty much write free verse. With an occasional rhyme creeping in here and there.

It’s not that I don’t understand formalism and forms. I’ve got two English degrees and have studied poetry and written about poetry for decades. I know all about poetic devices and rhyme schemes and metrical patterns. I can tell you what a sonnet is and a villanelle and a sestina and a haiku and a ballad. I’ve studied Latin poetry and memorized poetry in Latin. And in French. And I even know a simple nursery rhyme in Irish.

No, I’m not new to poetry. It’s an old friend that’s just come back round again for another swing. Every so often I take a stab at trying to write something formal. A sonnet: even a couple of rhyming stanzas. I’ve never got past the awkward self-consciously-bad-at-this stage.

And yes as a teacher of writing, I know what I’d tell myself if I were my own student or a friend coming to me for advice: Don’t give up. Keep trying. Write bad poetry. Keep at it. Write lots of bad poems. Practice like a pianist practices scales or an athlete drills. And I know that.

And I haven’t given up. I will keep trying even though everything I attempt falls flat. Thud. Even though I do usually give up too quickly. I get bored before I ever finish a practice piece because I know it’s no good. Maybe what I need is to take a class. With deadlines. Someone to hold my feet to the fire.

The thing is…. you see, the thing is…. I’ve been writing free verse poetry for years because it is easy. I can write something that pleases me. When I catch an idea and hang words in order I can achieve something that is possibly not a great poem, but which satisfies me in a little way, a satisfaction of having words which sound right, feel right, hanging just right together, to catch a mood and an idea and a moment. But when I try to take the same idea and fix those words in a particular rhyme and meter, when I try to make them fit a received form, they always fall flat, fizzle, sputter, and the light goes out and the idea is lost forever.

I know my little free-verse poems aren’t totally devoid of artifice. I play with sounds, with assonance and consonance and little bits of rhyme. I play with quotation, with images and repetition. There are things happening. I write and rewrite, they’re not just words spattered on the page willy nilly. They aren’t artless regurgitation of emotion. There are moments, phrases, turns of phrase that surprise and please me as they spring forth from my fingers as if the muse was leaning over my shoulder and pushing her own keys. I don’t think they’re especially great poems, but they are mine, my little children. And I love them. And yet… I feel absurdly guilty of the fact that they do not rhyme, they have no formal meter, they lack form beyond what form seemed necessary at the time. As a student of poetry who loves poetic form, who adores rhyme, I feel like something of a failure.

I should like to be able to write something as beautiful as Yeat’s The Wild Swans at Coole or Millay’s I will Put Chaos into Fourteen Lines or Stallings’s Like, The Sestina. I want to make rhyme and meter work for me. I want my words to sweep around the ballroom keeping perfect time so that everyone who sees them gasps not only at their artfulness and insight and grace but also at their technical brilliance.

I’ll probably never be a great metrical poet. I’m very bad at scansion, though I think I can hear and read a poem fairly well and do justice to its music. But when in poetry classes I had to include a scanned poem along with my essay, I’d get a friend to find the feet for me. I never could do it right. In English nor in Latin either. And rhyme… I can think of a million rhymes, but the ideas somehow resist end rhymes like a toddler refusing to get dressed. And I don’t think that’s something to be proud of. I feel like an abject failure as I look at the ruins of an idea spread out on a page like a dissected frog, wondering what went wrong and why the poor thing stopped croaking.

I should try to do exercises, make myself write bad poetry just so long as it rhymes and has meter. I try, but I get bored. It doesn’t sing and doesn’t live. This is why I gave up piano. It’s a fault. I’m easily bored and have no staying power to make myself forge on regardless through the exercises. I try. I try and I try but blech. I see no progress whatsoever and I despair. And then a poem comes, unbidden and unlooked for that does feel like it sings, though maybe it’s flat to everyone but me. Maybe it limps in truth but with one or two good lines.

And perhaps I’m too swayed by the critics of free verse. By Robert Frost declaiming that free verse is like playing tennis without a net. Maybe I shouldn’t let it sting so much. I don’t hate free verse. I rather like reading it when it’s well done. So why shouldn’t I write what I like? Why do I fear what other people think? Maybe it’s the internalized voice which I’ve heard from so many quarters that says I should have to earn the right to write free verse by first mastering formalism.

And,    “Another gnomic utterance from Eliot states: “It’s not wise to violate rules until you know how to observe them.” This still stands today as an indictment against would-be poets who never really take the trouble to learn how to practice the rules of formal poetry but stick to free verse all the way through,” says Sean O’Neil

And there you have it… it’s a sort of imposter syndrome, perhaps. A feeling of inadequacy, a fear of being sneered at, denounced as a fraud. But it’s not only that, either. It’s also admiring very much the skill and art of formal verse and wishing I had taken the time to acquire that skill.   So… my goal this year. I want to learn how to overcome all the noise and the competing voices, how to discipline myself to just write exercises, just make bad verses until I can write better and better versions. That’s what I want to do…. but I fear it will remain a nebulous goal and I’ll have no follow through.

Maybe I’m doomed to be a critic and not a poet. Doomed to writing free verse.   I believe intellectually that forms can be liberating, that constraints can free creativity… or I want to believe it. And yet, I feel like I’m standing on the edge of a cliff with a crowd of voices calling from the darkness on the opposite site of the chasm: come on, jump, trust us, you’ll make it, it’s not that far. But… the chasm….

A.E. Stallings is somewhat more encouraging: “Glibness aside, though, do I feel belligerent against free verse? No, I admire good free verse, I wish I wrote it better. Tennis without a net has its own beauties and choreography. But I write best (as more than one editor has pointed out to me when I tried to sneak in some free verse in a submission) when I write against the constraint and pressures of form–any constraint, really, be it syllabic, repetend, stanzaic, metrical, rhyme-schemed. I write… freer that way.” And yet… I really, really want to write poems as lovely as hers.