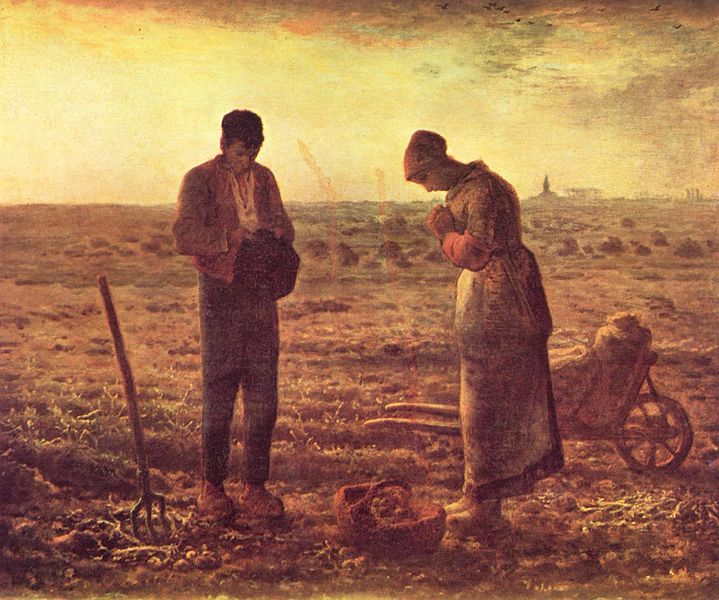 “. . . Every noon, a carillon
sprinkled its yellow petals above a morose
banyan. The Church of Immaculate Conception

was numbering the Angelus. With lace frills on,
balconies stood upright, as did the false pillars
of the Georgian library; each citizen

stood paralyzed as the bell counted the hours.
A dozen halos of sound down through the ages
confirmed the apostles. At store-counters, shoppers

crossed themselves with the shopgirls; tellers in cages
stopped riffling their own notes with one wet fingertip
drying before it moved on to turn the next leaf.

The streets held statues. A traveller off a ship
could have sauntered through that Pompeii of their belief
made by the ash of the Angelus, like St. Pierre,

whose only survivor had been a prisoner
who watched the volcano’s powder mottle the air
across the channel to blacken milk and flour.

Then the statues stirred, iron-shop blinds rippled down,
the banks closed for an hour, the entire town
went home for lunch, to come back on the stroke of one.”

— from Omeros by Derek Walcott, Chapter XXIII, Part I

The image of the entire town stopping for the Angelus arrested me. But it was the comparison to Pompeii that compelled me to transcribe the passage. That and the one wet fingertip that dries. I love Walcott’s detail work like that. And his imagination that is so expansive.

I keep coming back to my class on epic poems and the idea that the epic is a little cosmos, that it ideally contains in miniature, an image of the whole universe. The epic poet doesn’t just tell a story, he gives the reader a world. Epic similes and metaphors are expansive, they draw in all sorts of glimpses of unrelated corners of the world that the poet weaves into a coherent whole. Almost like the modern art technique of the collage made of snapshots.

Millet’s pastoral Angelus is almost antithetical to the picture Walcott paints. And yet the very contrast highlights one of the things I love about the Angelus, the universality of it and the way it, like liturgy, can unite people in disparate times and places, as they are all present at a moment that is both in time and outside of time. Like the Mass itself, the Angelus allows Catholics to participate in something that is bigger than they are, that unites the singular acts of people praying into a single act of communal prayer even when they are praying alone, transcending both time and space.