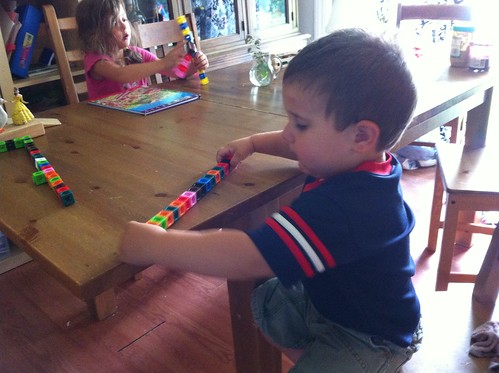 While I cooked the kids made trains out of the linking cubes.

Yesterday I declared a sick day. Not that that’s much different from any other day round here except for my attitude I guess. But I felt sick so I was looking forward to sitting in a chair most of the day. Then I tried to read a book to the kids and Anthony complained, “Don’t talk that. Talk loud.” I had laryngitis. I told him I couldn’t talk any louder, my voice was broken.

So no day of cozy read alouds. Instead I dug out the Narnia cds and put on Prince Caspian during nap time. Then I decided to use up the stale rolls from the farmer’s market to make bread pudding. 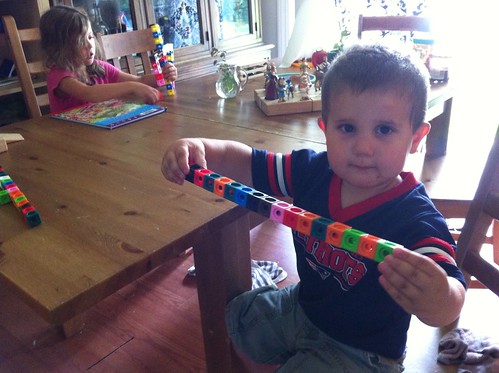 I made a train for Anthony. He can’t manage the cubes yet.

There’s this great French bakery, Pain d’Avignon, down on the Cape that has started to come to the Hingham Farmer’s Market. They make really awesome bread and the guy who sells it is really nice and has a newborn daughter, his first, so is always exclaiming over Lucy and asking about how she’s sleeping at night and that sort of stuff. We’re already starting to get discounts as “regulars.” Anyway, their rolls are so attractive, but we only ate about half of them. Nice, crusty French-style rolls. Think a baguette that has been made into a pretty round wheel of pull-apart rolls. Oh I wish I had a picture. 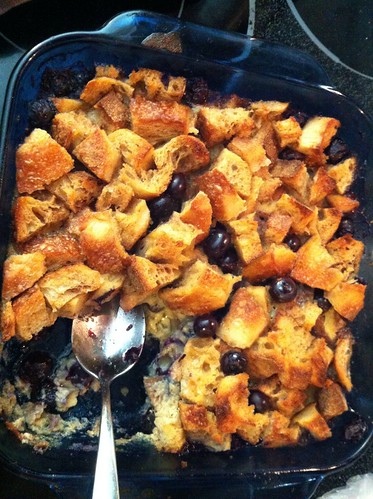 I did snap a picture of the bread pudding—not before I had a serving, though.

So most bread pudding recipes online cal for a whole loaf of bread, which seems to me to miss the whole spirit of bread pudding. Some of them even ask you to cut off the crusts. But the crusts are the best bits. They get all crunchy and yummy and add texture. So I adapted this leftover bread crust pudding, an honest name; but sad that you have to specify that you’re making it out of bread crusts!

Enough bread crusts to half fill an 8×8 baking dish, cut into roughly 1/2 inch cubes.
1/2 cup blueberries (I probably had more like 3/4 of a cup. I didn’t measure, just dumped. If I hadn’t had blueberries on hand I probably would have used currants. But Dom loves blueberries.)
4 eggs
2 cups milk
1/2 cup white sugar
1/4 cup brown sugar (you can use all white sugar, but I like the richness of brown.)
1 tsp ground cinnamon
1 tsp amaretto
1 tsp vanilla

1. In a bowl, beat together eggs, milk, 3/4 cup sugar, cinnamon, run extract and 1 tsp vanilla extract.
2. Pour egg mixture over the bread—or put bread in egg mixture and save a bowl!—and push down the bread to make sure all the bread is soaked in the egg mixture. Let it sit while you nurse the baby and preheat the oven.
3. Stir in blueberries and pour into buttered baking dish.
4. Bake at 350 degrees for 45 minutes, or until the top springs back when you lightly push it.

I skipped the sauce because the pudding doesn’t really need it and I definitely don’t need more sugar on top of the sugar and bread. But if you want you can make an amaretto cream sauce to go over it. That would be seriously decadent. 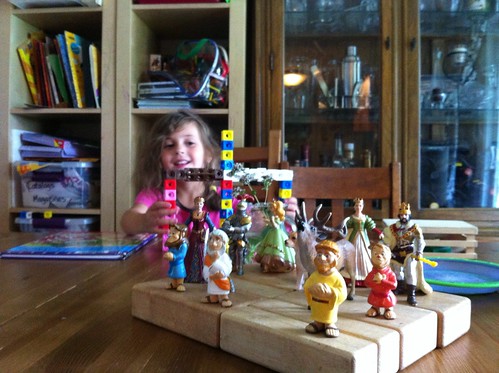 All the people waiting at the station for the train. I think they’ll be waiting a while since Sophie has converted her train into an enormous doll.