T.S. Eliot and the Last Crusade—Blogging the Waste Land Part 2 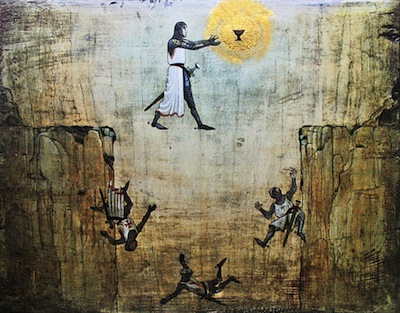 Part 1 of the series is here.

The full text of The Waste Land is here, if you want to follow along.

Yes, this is going to be an entire blog entry about the poem’s title. There is just so much to say before we even get to the main body of the text.

Already I’m grasping and fumbling for focus. Where to begin? Yes, focus has always been my weakness as a writer. When I fell in love with The Wasteland and wrote an essay on it in my freshman year I am positive it was a weak paper because I lacked focus. Still, what I chose to write on was the role of the Grail legend in the poem. To me the story of the grail was the key that unlocked the poem. So that is where I will start on this journey as well.

One of the things that makes The Waste Land so difficult is its density and fragmentation. The poem is made up of a series of either allusions to or direct quotations from other texts, poems, plays, operas, etc. Many are not even in English. It can be so overwhelming. (But then the Catholic liturgy is also intimidating to someone who has just stumbled in off the street.) Eliot’s technique of allusions makes the poem a kind of dense hypertext mosaic where each new line can contain a new reference to a different literary work. The poem is rather like one of those mosaic pictures where each panel is an entire picture in its own right. But as I will later show, there is a reason for this method. The method itself points to the meaning.

The Waste Land is like a treasure map and the title is the first clue. Once we understand that it is an allusion to a particular version of the Grail legend, then it tells us that we are on a quest. Yes, that’s right, as you read this poem you are setting out on the greatest of all quests: the Quest for the Holy Grail. That’s what I love about The Waste Land, it is a modern retelling of one of the greatest of all legends. From Monty Python, to Indiana Jones to Dan Brown, the quest for the grail continues to have a strong grip on the contemporary imagination.  In The Wasteland, however, you will find neither King Arthur nor the knights of the Round Table. You will not find heroic crusaders or intrepid archaeologists. And no grotesque fantasies about the sacred feminine or claptrap about Mary Magdalene being the bride of Jesus. Instead, Eliot’s version of the grail legend draws on the legend of the Fisher King and is a little more obscure—but more about that anon.

Another thing that makes the poem difficult is the cacophony of voices. Eliot’s original working title was “He Do the Police in Different Voices”, a reference to a character in Charles Dickens’ Our Mutual Friend who reads the newspaper with different voices. The allusion suggests a means to make sense of the cacophony: there is a controlling narrator to the poem who is “doing” all the different voices. There is a consciousness that is creating meaning. He is stitching together the various pieces that make up the poem and forming them into a sort of patchwork quilt. He is a sort of pilot steering a course in the seeming storm of words and images. Yes, I’m mixing my metaphors dreadfully, but it’s hard to talk about the poem without making a metaphor salad.

Now back to the Fisher King…. The version of the grail myth that Eliot is alluding to in the title might not be familiar to the reader as it is from Perceval, an unfinished romance by Chrétien de Troyes. (An aside: it’s fascinating to note that Eliot chooses to base his poem on a version of the grail story that is a fragment, unfinished. Fragmentation is a major theme in the poem.) Though the story of the Fisher King does appear in modern form in the fabulous movie of that name directed by Terry Gilliam and starring Robin Williams—I highly recommend it. I’m going from memory here and not looking up the story but the basic gist is that a knight on a quest comes to a barren land that has been stricken by some kind of plague or famine. He goes to a castle whee he finds a king, fishing. He finds that the king of the land is also wounded and wasting away. There is some kind of mystical connection between the king’s illness (a wound in his leg or groin. infertility?) and the sickness that has infested his realm. Only the grail can heal the wounded king. The knight must find the grail and heal the king, which will then heal the land.

While the knight is dining at the king’s hall he is presented with a vision of a youth carrying a spear and a maiden carrying the grail. Here he makes a fatal error in that he doesn’t exhibit any curiosity about the strange vision and fails to ask any questions about what it means. So he fails in the quest and goes off to wander aimlessly. The asking of the questions is somehow key to finding out what the grail is and that is somehow key to healing the king and his land.

Eliot has stated that the story of the Fisher King is a part of the mythological backdrop behind his poem and this is one poem that demands that you reach beyond the bare words of the text and into the various works that the text alludes to. The poem casts the reader in the role of the questing knight. In order to understand the poem, you, the reader, are required to become the knight. You are required to ask the questions that will make sense of the fragments that Eliot lays out before you. You are required to do the hard work of stitching them together into a coherent picture, a patchwork quilt. You must exhibit curiosity, ask questions of the text, delve into the meaning behind the symbols that Eliot mysteriously parades before you. The poem’s very obscurity points to the meaning, the need to cease being a passive observer, to ask questions, to realize that perhaps you are as much in need of the grail as is the wounded king.

A great book on the subject of the Holy Grail is The Grail Code: Quest for the Real Presence

by Mike Aquilina (I blogged about it very briefly here.) Aquilina maintains that the search for the grail is the search for the Real Presence of Christ. Frankly, I can’t see how this is even arguable. You can only imagine the Grail as something other than a symbol for Christ’s Presence in the Eucharist if you have divorced the legend from history and are reading it through a hermeneutic of suspicion. The plain meaning of the Grail has always been that it was the chalice that Christ used at the Last Supper. Sometimes it is also said to have caught Christ’s blood at the crucifixion. But of course to a Catholic sacramental imagination that is really a symbolic redundancy.

The Fisher King is an image both of Christ, the wounded king, the fisher of men, and also of humanity, wounded, in need of a savior. The act of fishing represents hope. Christ is often symbolized by a fish. Thus fishing can be seen as a representation of the search Christ. The Fisher King is a symbol of how the Body of Christ is wounded. The knight’s failure to ask questions speaks of our unwillingness to seek answers,our unwillingness to ask for healing. It speaks to me of my own situation, stuck in sin, avoiding confrontation with my own sinfulness, avoiding the confessional where I can confront that sin and have it washed away.

I could say so much more about this; but I think I’ll leave it at that for now. We will meet the Fisher King again in the poem. Keep him in mind as you read. He is part of a whole series of images that speak about the sacraments, especially the sacraments of baptism and of Eucharist.

Next post: Blogging The Waste Land Part 3—Epigraph and Dedication