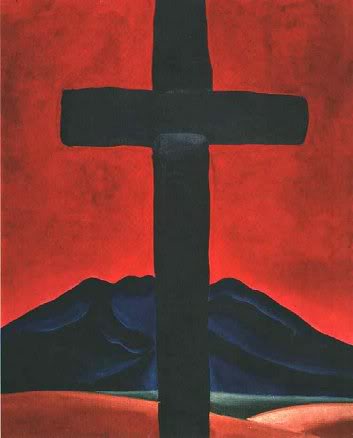 When Dom was first setting up this site for me, almost exactly seven years ago, and we were brainstorming about a name, one of the first names that I considered was The Waste Land, after the poem by T. S. Eliot, which is one of my favorites. That domain name, in just about any permutation, was already taken and so I went with a second choice, which is actually probably a better one. But I still adore the Eliot poem and recently I have conceived a hankering to share it with everyone in this space. It began when Calah mentioned it in a blog post at Barefoot and Pregnant. In the comments someone said that it was bizarre and too obscure for her. And my heart yearned to explain to the (poor! benighted!) commenter how absolutely wonderful, beautiful and good and true the poem is. Then I found myself mentioning it again in my blog post about People Look East.

After I mentioned The Waste Land in my Make your House Fair post, I found myself pondering it in the shower (All my best ideas come to me in the shower). I was recalling my youthful zeal to enlighten the masses about how wonderful Eliot is. I have found that even among people who love The Waste Land it is often misunderstood. (See my soapbox down there. I’m climbing up on it, which means I’m liable to get a bit pretentious. So if you don’t like that sort of thing, you can skip these posts and go look at the cute pictures of my kids.) When I first encountered it, I was told that The Waste Land is a poem about the bleakness and despair of the modern world—which is true to a point; but if it is a poem about doubt it is also a poem about hope. In the Judeo-Christian tradition the desert has often been a place of renewal, in the Bible new life is always springing up in places that were thought to be barren. I prefer to read The Waste Land as a great Christian epic that asserts that the problem of faith in the modern of world is not really a new problem but that people in every age need to seek again for the source of life.

So I said to myself, “Self, you should write a series of blog posts about The Waste Land. It would make a wonderful Lenten meditation, for example.” I’m not sure where the idea came from because it isn’t the sort of thing I’m likely to want to do. Still, I’ve learned to trust these moments of inspiration. However, I don’t want to wait until Lent to begin—by then I might have lost my initial impetus—so I’m going to just jump into it now and see where it goes. Though if I take this series as slowly as I suspect I will have to, I may very well be continuing it through Lent and beyond.Depending on how much I linger on each section and how often I post, this project could take months and months (or years and years).

So there you go. My new project. A completely crazy return to my roots both as an academic and a writer and a new grand goal for the new year.

I don’t want this to be an academic paper, an essay, nothing that formal, although I have been an academic and so I suspect that despite my best efforts to the contrary, the tone will tend to creep in that direction unless I hold very firm to my blogging voice. Still, lapses in tone notwithstanding, instead of a well-organized piece of academic writing, this will be very much a series of unedited blog posts by a sleepy mommy who just wants to exercise the part of her brain that she fears is declining into mush. I hope to jot down my various thoughts and impressions on the poem as they come to me in a stream of consciousness kind of way. I don’t propose to consider every word or even every line, just such bits and pieces as catch my fancy. It will not happen on any kind of predetermined schedule and it may in fact be irregular and infrequent. I have no idea how it will play out at all. But I am very excited at the prospect of being able to share one of my favorites—one of the great poems of the English language—with you. I do hope you will read along and add your comments and insights to mine. Feel free to argue with me, to dispute my interpretations. I love a good debate, so long as it stays civil.

I want to go ahead and jump right in with a few framing observations to set the scene. Eliot is often accused of being inaccessible and hard to read. Perhaps that is a just charge. I don’t think Eliot set out to be easy but I don’t think the poem is meant to be impossible either. It’s not like Finnegan’s Wake, which I suspect is difficult just for the sake of being difficult.

Poetry has always been the way I see the world; but I know for many people it is very hard. Still, I have never found Eliot anything other than a challenge, an invitation to dig deep or to scale the heights, I can’t quite decide which metaphor to use. I suppose you could say that he is my Everest, the mountain I had to climb because it was there.

I do know that I loved Eliot from the first time I met when, as a sophomore in high school, I was assigned The Love Song of J. Alfred Prufrock. Oh that poem still delights and amazes me! When a few years later I read The Waste Land as a freshman in college, in the spring of 1993—can it really be that it was almost twenty years ago?! I feel so old!—I was absolutely blown away, swept off my feet. The romance between Eliot and I lasted all four years of college and has continued to this day. To say that Eliot is my favorite poet is such an understatement. After I did my junior poet project on Eliot, I came to know him more thoroughly than I know any other author. His poetry reaches deep into the core of my being and is a part of who I am at the very heart of my spiritual and intellectual life. So in a way this is another rough draft of the paper I couldn’t really write as an inarticulate freshman or as a slightly less tongue-tied junior English major. I still can’t really write it fully; but I’m willing to give it another go.

I believe The Waste Land is the poem par excellence that grapples with the problem of faith in a post-Christian world. True, the poem doesn’t mention Christ by name nor is it explicitly Christian in its imagery. But it is, to borrow a phrase from Flannery O’Connor, Christ-haunted. I believe that one must enter into the world of the poem and to accept it on its own terms but that it does help to have a tour guide. I propose to become that guide, to offer my own insights and experiences of it. The poem is only difficult because the subject matter is difficult. It is only obscure because so much of the material it takes for granted has been lost. Reading it is participating in an archeological dig of sorts, you wade into the rubbish heap certain that you will find a treasure whose value is beyond price.

Now that I think about it, I suppose this project is really about my own renewal as well. I want to dive into the poem in the hopes of recovering the zeal I had a decade ago as a young English major. I want to restore that which has been lost, to dig deeper in the hops that this time I will uncover even more than I had found before. But I hope that for you, the blog reader, it will be interesting and entertaining. Even if you have no interest in Eliot or poetry, perhaps you will find something in these posts that will speak to you.

Next post: T.S. Eliot and the Last Crusade—Blogging the Waste Land Part 2