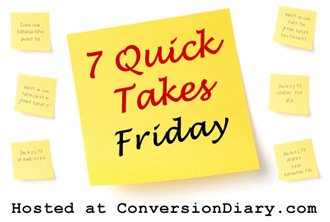 Since Ben has been taking over the blog of late, I thought I’d balance it out by highlighting the cuteness of Bella and Sophie. 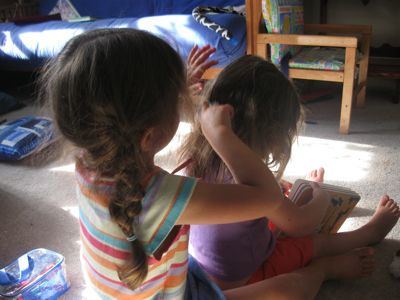 When Bella and Sophie play Bella is always the baby and Sophie is the mama.

It always throws me when when Bella calls out, “Mama!” Then, when I respond, she says, “No, I was talking to Phia.” 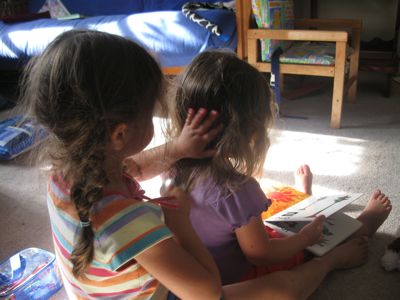 Bella is really getting into counting people. “How many people are in the kitchen?” she asks.

“How many people are in the house?” she continues.

“And Gina.” Bella adds, insistently, holding up an extra finger. I know better than to argue. Gina is Bella’s imaginary daughter. Or as Bella says, Gina’s my little girl.She showed up around the time Ben was born and is the only consistent member of Bella’s imaginary coterie.

“And you can add Gina,” I concede. 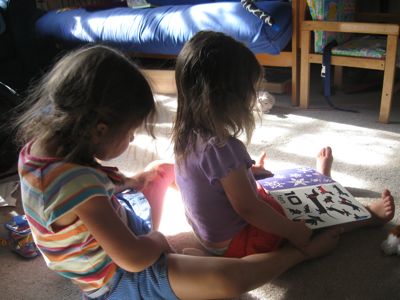 Today Bella and Sophie discovered the front coat closet. Oh they knew it was there before, but today they discovered they can sit on the ledge and close the doors (the bottom of the closet is built up about 18 inches and the water shut off is hidden inside). Tonight they were playing that it was their castle. Sophie was sitting inside the closet, opening and shutting the doors and Bella was bringing her books and play food. Sophie’s fingers were crushed three times in the doors and I had to kiss them; but still they refused to stop playing in the closet. 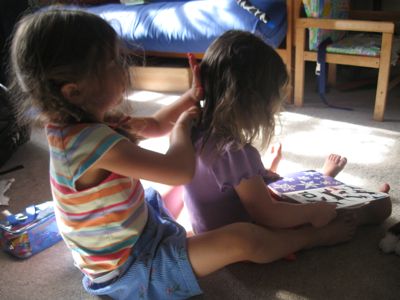 One of the sweetest parts of my day is watching Dom get Bella up for her midnight potty run right before he turns in for the night. He usually has to carry her because she’s such a sound sleeper. She’s so beautiful when she’s asleep. A perfect little face perched on his shoulder. These days it seems she’s all long legs dangling from his arms. She whimpers as he sets her on the toilet and continues to fuss a little till she’s on her way back to her bed. Sometimes she dashes back to her bed and dives in.

What is it about this scene that is so darling? A father taking a few minutes at the time of the day when he’s most tired to care for his little girl’s needs so she doesn’t wet herself in the night. 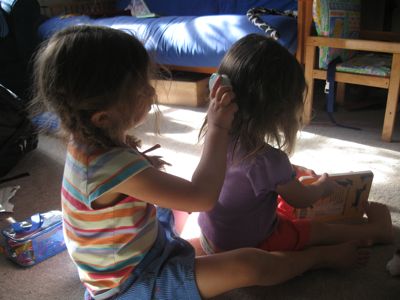 Out of the blue the other day, Bella announced: “I just have to say…. I love hugs and kisses.” 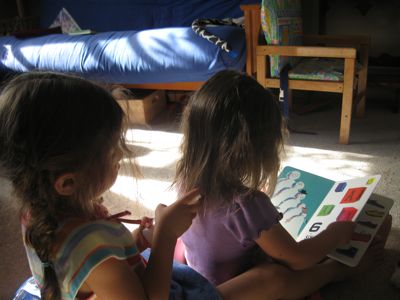 6. The Piper at the Gates of Sleep

I’ve been reading The Wind in the Willows to Sophie at nap time. Recently she’s gotten so that if I try to sing her to sleep she just sings along. It’s tricky to find something to read that is interesting enough to keep her from fidgeting but that will soothe her to sleep rather than keep her awake and hanging on.

Oh I’d forgotten how good it is. Not quite as good as Pooh; but very, very good. Several times I’ve kept reading aloud long after I was certain she was asleep. Just because it is so good. 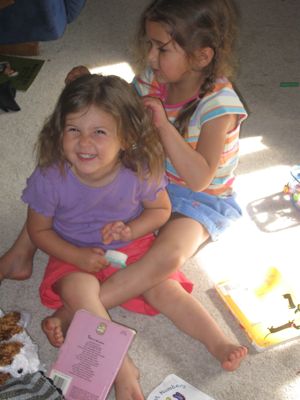 The other day Tree walked out the front door to get something from her car. She was holding Ben at the time and as she left she tossed over her shoulder: “I’m stealing the baby!” She’s always joking about stealing this or that.

But as she leaves Bella screams, “Benny!” and begins sobbing. Poor thing really thought her auntie was absconding with her baby brother. But I laughed as my eldest child began her meltdown. Mean mommy me. It was too funny not to laugh.

Photos: Bella brushes Sophie’s hair. (I was quite taken with Bella’s technique. Note the hand that smooths the hair above the brush. So cute.)