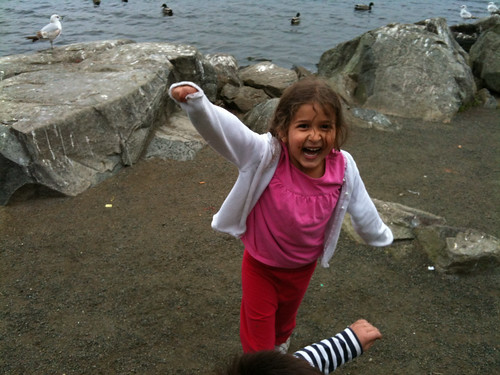 Last Sunday since Dom was in the hospital and we were all going stir-crazy, the kids and I took a drive to the park and fed the ducks, geese, and a swan. It was cold and wet; but at least they were out of the house. 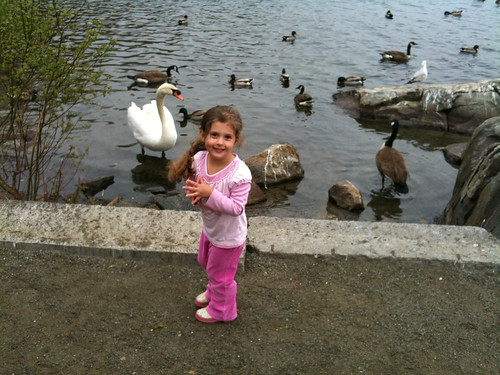 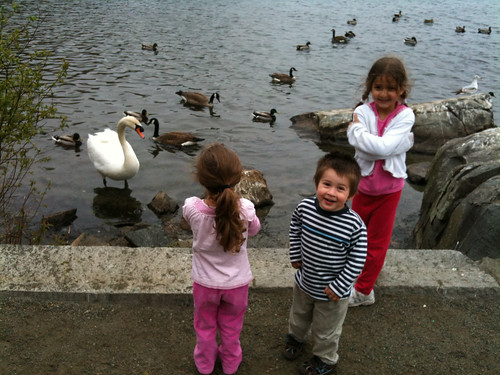 On Monday Bella and I had a dental appointment. As I was asking her to get her shoes on, I looked up and noticed that the light rain had turned into a torrential downpour. I pointed it out to Bella and she grew distressed about the idea of having to go out in the rain. She even started to say something about maybe not going to the dentist at all. I hate to see her distressed and so I told her to pray about it. Jesus calmed the storm, I reminded her, he can make the rain go away if you ask him. I don’t know why I suggested that but somehow the words were coming out of my mouth. Not my usual style. So we prayed and continued to get ready. Sure enough, right before we went out the door I looked up and the rain had abated. When we went out to the car the rain was a light drizzle. Bella and I got into the car and as I was putting the address into the GPS the rain grew heavier. As we pulled out of the driveway the downpour returned. It rained most of the way to the dentist but again when we pulled into the drive there the rain had slowed to a drizzle. I pointed it out to Bella and she was thrilled that Jesus had answered her prayers. 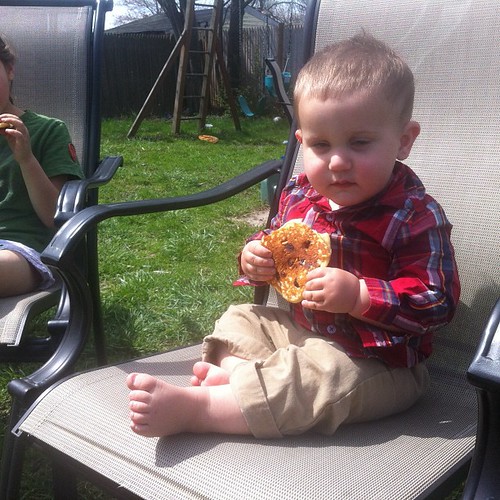 Bella was stumped, trying to figure out what game she would play. Then she perked up, declaring she would do something from the Old Testament. Later I came in and found her playing the parting of the Red Sea. She had two orange scarves spread out side by side on the floor. There were two bunches of animals and figures. The Israelites were in the middle of crossing the sea. Some of them were perched on the trailer of Ben’s flatbed truck. They has a bunch of plastic shapes piled up with them, representing their luggage. There was a family and a single woman and I think a few other people. The other group clustered together behind her were the Egyptians. Unfortunately, I had to interrupt her game to take her to the dentist. 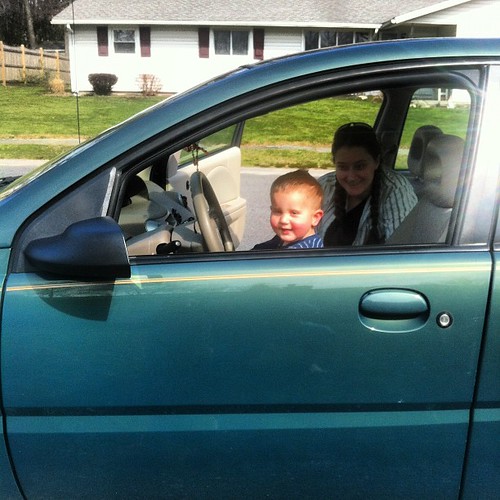 Anthony’s first driving lesson. Actually, I just needed him out from underfoot (I think it was while I made dinner). Since Theresa was outside cleaning her car, I asked if he could keep her company. Both of them were delighted with the solution.

At dinner Sophie was asking for words to be defined. “What’s ‘devour’ mean?” she asked. So we defined it for her. Then she stumped us, “What does ‘go-ap’ mean?” What? we asked. Over and over again Dom and I tried to mimic back the word she was saying and every time she looked at us as if we were crazy and then repeated it again, slowly and loudly. Over and over and over and over and over. We tried throwing in an ‘r’ on the theory that she’s from Massachusetts and maybe was dropping that little-pronounced letter. Nope. We started to think it was supremely funny and laughed and laughed as we tried to mimic our four-year-old’s pronunciation. She alternated between frustration with our incomprehension and taking offense at our laughter and joining in with the giggling.

Dom kept trying to get her to use it in a sentence. Finally she understood what he was asking. “You go-ap your food.” It still took me a minute or two and then suddenly it clicked: “Gulp”. It pairs nicely with ‘devour’. It wasn’t so much a Massachusetts accent she was sporting as a Texan drawl. Later I texted an account of the conversation to my mom and siblings. I didn’t tell them what the solution was but left them to guess. My sister threw out a few of the same things we’d guessed. But my little brother with the Texan drawl got it in one. Unfortunately after that she started to ask us about another word she kept repeating it and we never did get it. Poor Sophie. 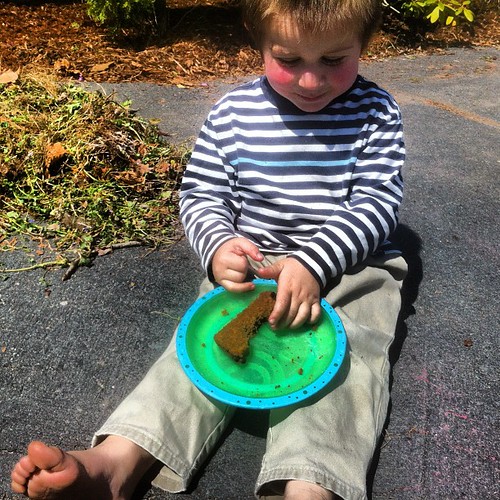 Ben enjoys a snack outside after a tiring morning of helping with the yard work.

I’ve noticed that sometime in the past few weeks Ben has made a jump from playing mostly by himself near his sisters to being a frequent partner in Sophie’s games. To the point that Bella has had a few moments of feeling left out when she wandered in from whatever she’d been doing on her own (wandering in the yard, lost in a book, eating a snack, etc) and found that Sophie and Ben were deep into a game and didn’t want to include her. I think Sophie likes playing with Ben because he’s content to follow her lead and doesn’t try to control things as Bella does. (In the past I’ve often heard Sophie telling Bella that she’s playing “a one person game.”) Ben loves the attention from his big sister. Both Ben and Sophie are united in fending off Anthony, the pesky little brother who is constantly, “ruining our game!” 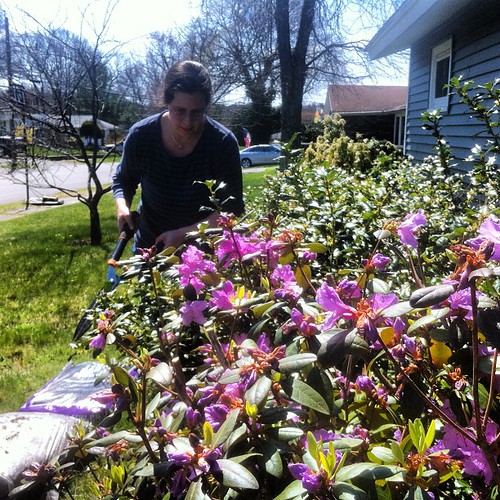 Last Saturday we spent the morning going to Home Depot for mulch and then weeding the front beds, trimming the bushes, and laying down mulch. Very satisfying to get this done after a couple of years of meaning to get around to it. Yes years. Last year we had Anthony so my participation in yard work was practically non-existent. There is still more trimming I’d like to do. My only window of opportunity is while Anthony is napping because if he’s up I have to keep an eagle eye on him to keep him out of the street.