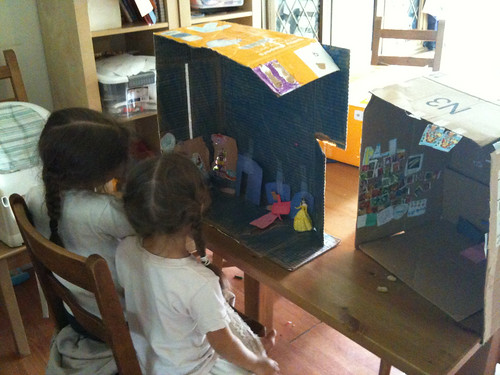 The box on the left is Bella’s doll house. The one on the right is the grocery store she made later, complete with food pictures cut from seed catalogs. I suppose it’s properly a greengrocers.

So a while back we read two of Rumer Godden’s dolls books, Miss Happiness and Miss Flower and Little Plum, about a little girl named Nona who moved from India to live with cousins in England after her mother dies. Nona and her cousins receive a gift of two Japanese dolls from a great aunt and Nona embarks on a project to build them a proper Japanese doll’s house. In order to get it right, Nona befriends a bookseller and borrows piles of books about Japanese culture and architecture and art, a perfect example of child-led learning.  She learns about futons and haiku and kimonos and manual skills like woodworking and sewing and painting and gardening. 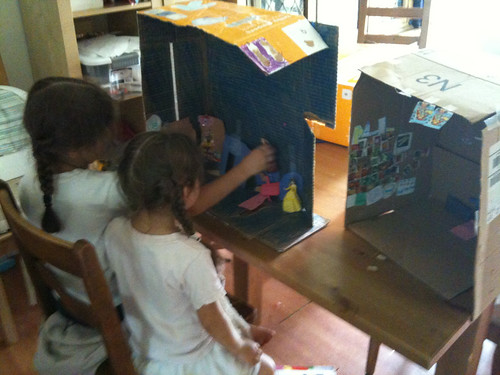 I might have thought it would lead to an interest in Japan and Japanese culture but instead it led to a fascination with making dolls houses. Bella embarked on a project of turning a cardboard diaper box that she appropriated into a house for paper dolls. She spent days coloring it inside and out and then created furnishings and then made dolls to go with it. She’s been playing with it for months and is constantly adding new things, crafting new dolls, using it in new and surprising ways.  And sharing it with her little sister. Recently the two of them made a grocery store out of a second box, stocking the shelves with pictures of food cut out from seed catalogs and with other things drawn by Bella. Inspired by Betsy and Tacy’s paper dolls cut from catalogs, they have cut out paper dolls from a Dharma Trading Post catalog I had laying around. I have seen them fashion furniture out of blocks, make backyards and additional rooms and structures out of blocks, and even incorporate Ben and his cars and trucks into the doll’s house play.

Today Bella decided to make Sophie her own doll’s house since Sophie is constantly wanting to use Bella’s and it has led to some friction and conflicts. I heard her telling Sophie that “It takes a long time to make a doll’s house. At least a week.” I am impressed with Bella’s ability to focus so intently on a task for so long and with some of the problem solving she has done. And with her generosity and cooperative spirit, making dolls for Sophie and giving her turns with the house and grocery store.

Charlotte Mason advocates teaching children handcrafts—but not busy work. She says they should be involved in making useful things. I am gratified to see that when she isn’t doing projects in order to master a new skill like drawing a particular thing she wants to learn how to draw, Bella almost always turns her crafting to things she can use herself or things she can give to others. 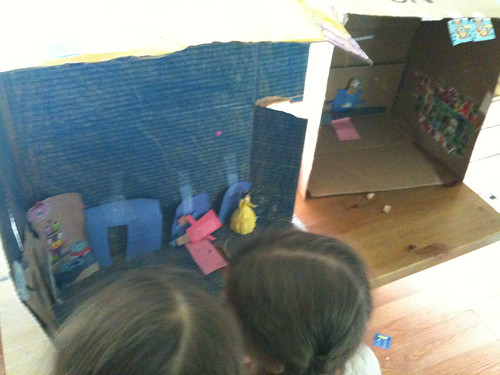