I gave Bella some pieces of tissue paper to play with this morning. (I’m finally writing thank you notes for Benedict’s baptismal presents, which means finally pulling the presents out of the gift bags. Thus the tissue paper from the gift bags.) 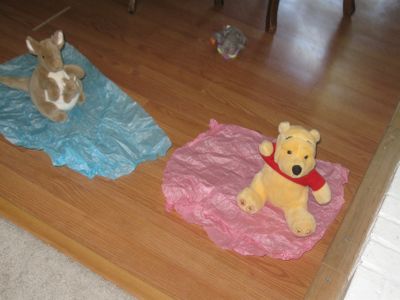 She soon had them spread out on the floor with her stuffed animals sitting on them as if they were mats. Like the librarian puts out for story time at the library. 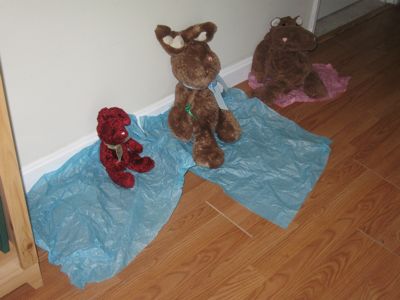 Then she’d pulled a bunch of books off the shelf, perched herself in a chair facing them and began to host story time. Just like the one at the library. 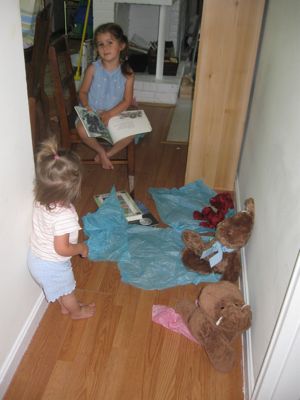 Soon Sophie wandered in and got caught up in the action. She was thrilled to have Bella reading to her. But soon she wanted Bella to read a different book, Curious George Goes to the Fire Station.  She stood in front of Bella and shook the book while whining. Bella made her wait until she was done with her selection; but then gamely read her way through Sophie’s book. She has a very engaging reading style. “What is this, Sophie?” she’d ask. And, “Is that George?”

She was also coaching Sophie: “Could you say smoke?” and Sophie would reply, “moke.” Then
“Can you say ball?” and Sophie says, “Ball.”

I tried to redirect toward naptime, but Bella informed me that she had to finish the book first. So I consented. Then she had to sing “Head, Shoulders, Knees, and Toes”. (Because that’s how the librarian always ends story time.)

(I laughed during her rendition of Head Shoulders because even when she’s the one singing Bella’s hand motions don’t sync with the words.)

And then when the song had been sung, Bella declared that they had to color pictures of fish. Because she’d read a book about fish and at the library they always ended with an art project that was thematically related to the books.

Finally, after I’d drawn several dozen fish for her, Bella consented to transition to nap time.