A ragged start to the morning. Everyone was up at a reasonable time, but Sophie was grumpy and Bella was distracted.

I did teach them a hymn: Rise Up O Men of God. At least I think they learned a bit of it. I was trying to figure out why I couldn’t get make the tune sound right on the last line and Bella sang it properly and I figured out what I was doing wrong. So that was fun. Sophie said really liked the words of the first stanza.

Bella wanted to start off with reading and so picked a passage from The Voyage of the Dawn Treader and picked her way through it. I was a bit distracted with diaper changes, making a loaf of bread, and dealing with Ben and Anthony. Still, at least she’s not afraid of big books. Getting her to do much else was like pulling teeth. Her mind was a million miles away. She did half a page of copy work and I dragged her through a page of math, one problem at a time. When that was done, she happily settled into drawing an elaborate two story house on two pages of paper glued together. She drew on both front and back, making doors to connect the two halves of the house: a bed room and bath room on the top floor, a living room and something else on the bottom floor. Lots of colors, lots of furnishings and decorations. It was Christmas in the picture so there were decorations. There was also a curtain with the Virgin Mary on it. Ben imitated Bella and drew his own house with stairs and people in it and a toy race car.

Eventually Sophie did a page of copy work and illustrated it: I am the bread of life with a nice picture of a crucifix hanging over an altar with a chalice and a host. I’d say she gets it pretty well, no?

I got Sophie to do a page of Saxon and a page of Miquon, which I’d like to eventually be a habit. One of each. Then Sophie read me a board book.

I didn’t get Ben to do any math or reading.

After school time Sophie and I did a bit of sewing. I worked on hemming the neck and arm holes of one dolly dress that I’d already made and at putting together the pieces of a reversible dress I’d designed. I’m happy with the basic dress template. Now I want to figure out sleeves. Sophie stitched at her St Therese embroidery. She even managed to thread her needle once. She was still rather grumpy and volatile all morning, though.

Afternoon stories: Ben wanted Brambly Hedge. So I read Spring Story. Then Bella wanted Gifts of the Heart by Patricia Polacco. Then we read two chapters of Across the Puddingstone Dam. And then the Geraldine McCaughrean version of Othello. And then the chapter on Job from the Book of Angels. Ben requested a chapter of history, but we ran out of time. I was a bit surprised since the last time I tried to read history he protested vehemently but then he liked the chapter after all, I guess. It was about the 30 Years War. Maybe he liked the bits about soldiers and fighting. Anyway, maybe we’ll get to it tomorrow.

Dom was working late so Bella made mac n cheese for dinner. I helped with explaining the steps and poured the pasta into the colander and measured out the yogurt. Otherwise, she was in charge. And very proud of herself. Ben peeled his own apple after I helped him start it and showed him how to use the peeler. Oh and as we were eating dinner Bella asked me to read Robert Frost’s Christmas Trees again. She really liked it the other day, I guess.

Ben, Bella, and Anthony each went to bed with a volume of Narnia to look at. Bella was trying to read more bits of The Voyage of the Dawn Treader. Ben was scaring himself with the picture of Tash in The Horse and His Boy. I don’t know which Anthony had, maybe The Last Battle.

A little more focused today. Sophie did a page of Saxon math, copywork, and read me The Wheels on the Bus. Bella did two pages of Miquon— measuring— and the second half of yesterday’s copywork. And then both girls did a brief reading lesson. Bella read to me at the end of the day: a few pages of In the Belly of an Ox.

Ben did several pages of letter writing practice and we did a math lesson. Anthony sort of fooled around with a workbook.

Lucy sorted bears by color. Anthony can count to twenty.

After school time Sophie and Bella and I did some sewing. I made a flannel nightgown for Bella’s doll. The girls worked on embroidery projects.

Then the kids all ran out to play. (Though Sophie did take her embroidery outside for a bit. It was really cute to see her wandering about with it.)

There was this exchange at lunch time:

Afternoon stories: A chapter from Across the Puddingstone Dam. Then two Brambly Hedge stories.Then I fell asleep.

For bedtime stories Ben requested the next installment of The Fantastic Flying Journey. I still think of it as peculiarly Bella’s book, so it was nice to see that he was getting into it.

Bella did an easy page of math. Then a page in her spelling work book.

Sophie was the one off this morning. She did half a page of copywork and then gave up. But when I told her she could stop, she pushed on and finished it after all. She did a page of Saxon math and then was frustrated in her attempt to read to me because I’d already started reading to the others.

It was a book about Vasco de Gama and the exploration of the African coast and opening of the trade route to India and the spice islands.

After that we went to the library and got lots of books. We had fun noticing grapes growing on the fence at the library parking lot. Which reminded us of the Robert Frost poem October— the leaves were already burnt with frost but the lustered fruit was not yet lost. I also had to look up Concord grapes to verify that indeed they were bred by a farmer near Concord, Massachusetts.

Then home for lunch and after lunch and after Lucy was down for her nap we read through a bunch: there were a few fluffy ones. One that Anthony picked about armadillos that was quite informative, the library has a whole series of books about various animals and they’re all a big hit with the children.

There was a book about pilgrims/Thanksgiving. I think it was P is for Pilgrim. I thought the quality was uneven. For each letter there was a little verse and then a longish sidebar full of sometimes relevant information. There were some very nice and informative bits but in many places it felt like irrelevant information was packed in just because. It totally lacked focus. and the verse was rather mediocre. I also found it hard to read because even though it called itself an alphabet book, there wasn’t a single word for each letter, but several scattered in each verse.

We also read a chapter of Across the Puddingstone Dam.

As I cooked dinner we listened to the Office of Readings and heard a bit about St Josephat. Bella had questions so I found a fuller biography at Catholic Online, a really thorough one. And a little discussion about the split between East and West. Good stuff.

And then for bedtime stories another installment of The Fantastic Flying Journey and then Sophie wanted one of the library books.

Field trip to the MFA! Dom had work that needed to be done on Tuesday so he took today off. We went to see the Goya exhibit and then of course looked at lots of other stuff too. A busy, fun-filled day. My feet are now killing me.

No school work, of course. We listened to the end of Prince Caspian in the car, arriving at the museum in the middle of Peter’s battle with Miraz and arriving home right before the children went back to England, so we stayed in the car to listen to the last little bit, of course.

Bella and Sophie worked on sewing more felt stuffed animals, Bella did hers while listening to the iPod. They looked at the Goya book we bought at the gift shop.

Bedtime stories from the Don Quixote story book I also picked up at the gift shop. An impulse buy since the kids loved the picture book so much.

We woke to snow. I decided we all needed a school holiday, so no work this morning.

We did go to the grocery store. And then came home and had lunch and goofed around.

Not much reading this afternoon either. The next chapter in Across the Puddingstone Dam. Then the kids scattered. Bella stayed with me to read a picture book about the Amazon that mixed geography and history with bits about animals and plants and ecosystem and geology and economics. It started high in the Andes Mountains and followed the river all the way to the sea. A great read. I learned quite a bit too. Then we read a book about the Pilgrims and the First Thanksgiving.

And that was it. The kids played on the iPad. Did do some reading and phonics apps.

Bedtime story: Bella and Dom finally finished The Fantastic Flying Journey. Sophie and I read a library book about The First Day of School.

Lucy has hit that age where she’s suddenly really playing with toys. She’s got a favorite dolly that she carries around and talks to and puts into a basket with a blanket over it. She likes to play in the play kitchen, making food. Today she came into the living room with an oven mitt on her hand and holding a teapot, which she declared to be hot. She brings me pieces of play food to eat. She’s also stacking block into towers and playing with cars and trucks a little. Today when I was asking the kids what their favorite animals were, I asked her too and she first said, “I don’ know,” and then amended it to “Horsie!” She loves to count, and knows quite a few of the numbers and says them in fairly good sequence. She also loves to say letters of the alphabet. 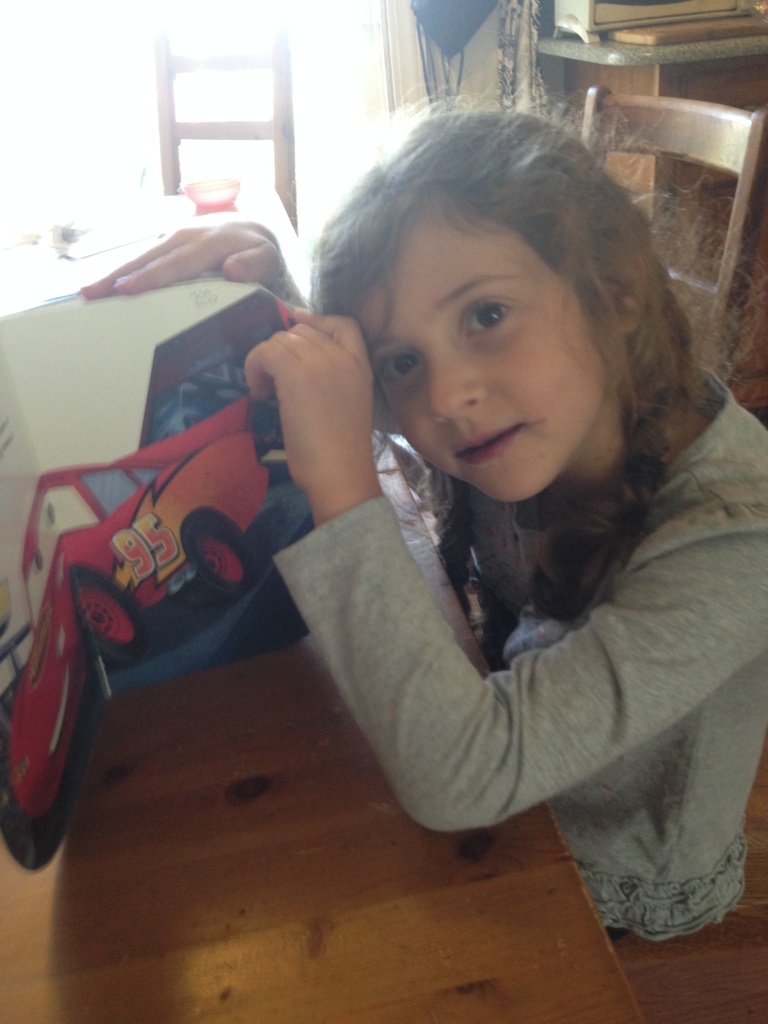 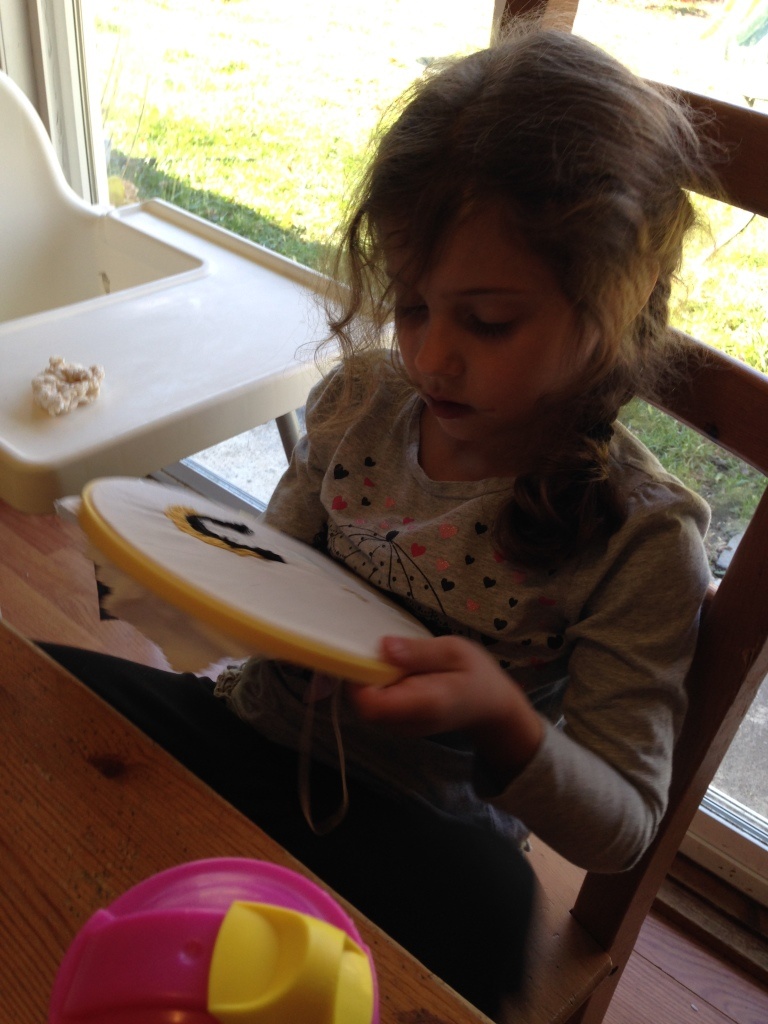