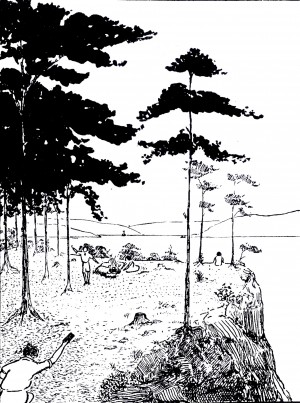 Arthur Ransome’s juvenile novel Swallows and Amazons opens with the receipt of a telegram. Roger and the other Walker children have been waiting eagerly for the response from their father to their letters begging that they be allowed go go and camp on the island in the lake where they are vacationing. Their mother can’t go with them, she must mind the baby, so camping will mean being on their own without an adult, building their own fires and cooking their own food and sailing across the lake without an adult. It’s an immense amount of freedom, and not without risk.

When the telegram from Father finally arrives it is cryptic: Better Drowned Than Duffers. If Not Duffers Won’t Drown. What does that mean? asks Roger. Does it mean yes? It does mean yes, in a roundabout way. Does Father literally mean he’d rather see his children die than be incompetent seamen? Well, being in the Royal Navy perhaps he has a better understanding than most of the dangers of incompetence. The incompetent person is a danger not only to himself but to everyone around him. Father doesn’t want his children to drown, but he does want them to be capable of independent action, capable of making decisions and taking action.   His second sentence is reassuring: If Not Duffers Won’t Drown is a huge vote of confidence. It suggests that he does not think his children will drown, quite the opposite. The telegram is lighthearted and humorous, but it is also calculated as a pointed reminder to his children that setting sail on the lake *is* a life and death matter. Children can and do drown in sailing accidents. He expects them to be sensible and prudent and to follow the safety procedures and protocols they have learned. If they remember what they have been taught and do it, they will be safe.

I love thinking about this novel in conjunction with the Dresden Files short story, Zoo Day and its lesson about child-sized dangers. The more I think about it the more I love how the protagonists of the Swallows and Amazons series take on child-sized dangers like Maggie does. And that is where the recent movie adaptation of Swallows and Amazons diverges from the book.

In the novel the true risks, the natural ones such as the lake, the weather, campfires, sailing, meeting strangers, are ones that they adults are confident the children can handle, while most of the exciting dangers the children confront are imaginary. Titty only imagines that Uncle Jim is a pirate. Really, he’s a lovable uncle. Yes, there are local toughs who break into the house boat, but the children never confront them directly. They only carry a message from the charcoal burners to Uncle Jim. Titty observes the burglars unseen from her position in the Amazon, but they do not observe her.

But in the movie the story is rewritten for a more modern sensibility. The drama is amped up, the stakes are raised. Now no longer is the treasure hidden on the “pirate’s” houseboat a mere manuscript and the thieves are no longer just local toughs. Instead the houseboat is a spy’s den and houses secret military plans and the thieves are genuine gun-wielding Russian spies. The children’s great accomplishment is no longer rescuing Uncle Jim’s manuscript, now it’s saving his life and foiling the Russian spies. It’s no longer enough to save the day for a struggling writer, they also have to save the whole country.

What makes the whole amping up of the drama seems particularly silly is that Ransome’s original story is not without dangers. From the very beginning Father’s telegraphed warning reminds us that they do not live in an entirely safe world. The telegram strikes a balance between allowing the children freedom to camp on their own and reminding them of the stakes: children can and do drown while messing around in boats. Don’t be a duffer and you won’t drown. Father’s black humor shows that he is aware of the possible danger. But at the same time it’s reassuring. It clearly communicates that Father wants his children to learn independence, to be the kind of children who can act competently in the world without endangering themselves and others.

The Walker parents strike that perfect balance between freedom and responsibility, between calculated risk and a reasonable safety net. Mother and Father allow the children the freedom of sailing their boat on their own and of camping alone on the island, of lighting fires and cooking their own food. But there are limitations. They must check in daily with the farmers who will report to Mother if they don’t show up to collect their milk. Susan is to make sure they eat regular meals at the proper times, brush their teeth, stay clean, and go to bed on time. The narrative makes it quite clear that if Susan and John weren’t so responsible camping on their own would be right out, especially for Titty and Roger.

Best of all, Ransome shows us clearly how well the children do understand the contract they have entered into. When they do break the rules and stay out all night and act like fools, sailing in the dark Mother confronts John firmly but lovingly. He and she both know he was acting like a duffer and could very well have gotten them drowned. And yet Mother recognizes that the reproof is enough. John admits his error and promises unprompted that it won’t happen again. Mother recognizes his contrition and that he has learned from his mistake. She trusts that it won’t happen again. John maintains Mother’s trust by telling her right away about his mistake, by being honest about his faults and not hiding them hoping they won’t be found out. To admit his foolishness takes courage and maturity and shows that John is worthy of his parents’ trust.

Throughout the series the children of the Swallow and the Amazon face many dangers and challenges: getting stuck in a mine collapse, fighting a wildfire, being swept off to sea in a fog and accidentally crossing the English channel in the night, being framed for a crime they didn’t commit. But all of them are child-sized dangers. Even being swept out to sea in the fog is believable. And all of them fall far short of the ‘save the world from the evil overlord’ scenarios of Harry Potter and The Hunger Games and the like.

Ransome’s children know they will be protected by their adults. They know they will face some challenges on their own. What they never have to do is save adults from adult-sized dangers. Even when they are fighting the wildfire in Pigeon Post, their primary victory is to get a timely message through to the local fire brigade. While the children certainly are heroic and even risk their lives fighting the fire, they also know to turn to adults in a time of true crisis. It’s a delicate balance the novels walk between having the children real risks and yet allowing them to live in a much more carefree childlike world where they have the freedom to play and to inhabit their own, private let’s-pretend world.

In both worlds, that of the Dresden Files and of Swallows and Amazons, childhood is not imagined as an idyllic realm in which children are coddled and protected from all harm but neither is it a miniature adulthood in which children are just smaller people facing the same kinds of challenges as adults. Rather childhood is a testing ground in which not-yet mature persons who are not yet fully capable of prudent decision making, who are still prone to impulsivity, are given the chance to test themselves, to learn, to rise to the occasion so that some day they may become competent adults who fight the foe and save the world.

Even though in the books we never see them grown to adulthood, the Walker and Blackett children will come of age in the time of the Second World War and I like to imagine that all of them have exciting adventures on land, sea and air, but especially at sea, as they fight the Axis powers to save Britain. Because they will not be duffers, they will not drown, they will be confident as they face down the great evils of their day.

Part I: Child-Size Dangers: A Training Ground for the Young