Now We Are Six– Sophie’s Birthday

It still feels weird to me to have the present opening in the morning and the cake and candles at night. Birthday presents and birthday cake seem so necessarily to belong together that to do one without the other makes both seem uncomfortably incomplete. Though I don’t think the kids notice at all.

It really does work out better, though. The birthday girl had all day to enjoy playing with her presents and the dessert time wasn’t nearly so rushed. Which meant bedtime was kind of reasonable. And that was vital given that today was Ash Wednesday and we had to get the kids up extra early to make 8:15 Mass at the Pastoral Center.

So my parents sent Sophie an iPod mini, refurbished, with a cute set of tiger headphones. By the end of breakfast I had it loaded with some of her favorite music and the audio book of Prince Caspian. She was really over the moon about having her own iPod. Not having to try to beg a turn from Bella is huge.

But at least in the present-opening moment the present that stole the show was not the fancy electronics, but the $6 little car I bought at the drugstore the other night. There’s a story behind this little car. Several years ago when my sister was living with us, she bought Sophie a little green Volkswagen beetle. And Sophie loved it and named it Little Car. And eventually, little bit by little bit, Little Car was demolished. This is what happens when small children have fragile toys. They break. I put off throwing it away because I knew how much Sophie loved that car. It was Real. But it was also a hazard and there was Anthony and I sadly told Sophie that Little Car was too broken. And Little Car went into the kitchen trashcan.

Sophie declared that she’s going to pretend this new car is Little Car, fixed up and painted a new color. Little Car lives!

Of course, Sophie also got several books: Owl at Home

, The Barefoot Book of Classic Poems

. I’ll have to write more about them later. Suffice it to say now that they were all right on target.

I spent most of the day making Sophie’s request for birthday cake: yellow cupcakes with chocolate frosting. Yellow cake recipe here, I substituted whole wheat pasty flour, which undoubtedly made it more dense; but everyone liked it so success. The frosting was chocolate ganache cream cheese frosting and it was really good, even if not quite so good as last time since I forgot to buy heavy cream and had to use half and half and used a bit too much of that and had to add more powdered sugar to compensate. I frosted exactly six cupcakes and put the rest in the freezer and the remainder of the frosting in a tub in the fridge because I wasn’t sure how well it would freeze. I’ll pull them out on Lucia’s baptism day, but I didn’t want them where I could reach them, tempting me while I fasted on Ash Wednesday. It would have been too much to bear. As it was, they were a very nice Fat Tuesday treat.

But I did also take some breaks to read the new books with the kids. The Barefoot poetry book is just gorgeous. I adore the illustrations so very, very much. And the selection is top notch. I was a little on the fence about buying another poetry book, but I’m very glad I took the leap. And we already knew and loved Owl at Home because we’ve borrowed it from the library before. I don’t often buy books our library owns, but some books are special enough that you just need to have your own copy. (Thanks to Pentimento for the recommendation.) And Anno’s Counting Book is a bit simple for Sophie as far as the counting is concerned, but I knew she’d love the pictures, which are just begging to be made into stories. And Ben and Anthony can practice their counting with it too. 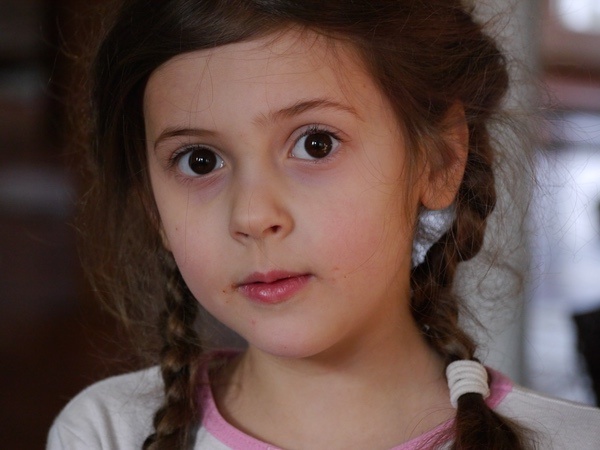 For dinner Sophie wanted to go to Chili’s. “Because we haven’t been there in a long time.” Indeed, Bella of the prodigious memory said that the last time we were there was the day Pope Francis was elected when I was just too distracted to deal with making dinner. Sophie got a hamburger and fries, which she could have got anywhere. I guess we were there for the ambiance? But I had enchiladas and was quite happy with them as a Fat Tuesday treat.

Lucia fell asleep on the way home from Chili’s and I put her into the crib fully dressed in her pants and shirt and slipper shoes. She woke to nurse around midnight since she didn’t get her bedtime session. But I didn’t bother to change her. This proved most handy this morning when we were rushed getting out the door to Mass. Lucy woke at about 6 and nursed for a good long time and then went back to sleep. When it was time to leave for Mass, I just scooped her up, put on her coat and hat, and popped her in the carseat. I was so very glad she was already dressed.

Anyway, poor Lucy missed out on the dessert. But everyone else enjoyed it immensely. Sophie had the hardest time blowing out the candles. But did get it eventually.

A very happy birthday for my very happy Sophie. I am so, so very blessed to have this sweet little girl in my life. I can’t wait to see what the next year will bring.