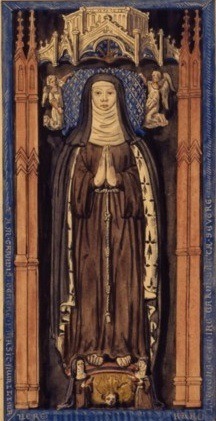 Today is the feast of Blessed Isabelle of France (to the best of my knowledge but I’ve also found sources claiming February 23, 25, 26 or for the Franciscans August 31, and September 1.)
She is the younger sister of St Louis, King of France, and the patron saint of my Isabella.

I’ve long had a dream of writing a children’s picture book about Blessed Isabelle, a beautiful princess who declined wealth and a prestigious marriage to the son of the Holy Roman emperor and instead founded an abbey of Franciscan nuns and lived a voluntary life of celibacy and poverty. It seems to me that it’s a story that would very much appeal to little girls who love princesses. And as Isabelle/Isabella is among the most popular of girl’s names right now I think there would be a lot of little girls who would enjoy it.

The wonderful thing about Bl. Isabelle is that there is an excellent primary source, The Writings Of Agnes Of Harcourt: The Life of Isabelle of France and the Letter on Louis IX and Longchamp (ND TEXTS MEDIEVAL CU)

, a biography written by the third abbess of Longchamp, the Abbey founded by Isabelle. Agnes de Harcourt was probably one of Isabelle’s ladies in waiting before she followed her mistress into religious life. She writes a lively firsthand account of the Blessed Isabelle’s life full of charming details. The text is also noteworthy as to the best of our knowledge, ‘the first life of a woman by a contemporary woman written in the languages of France,’ and moreover that Agnes of Harcourt is ‘the first woman to have written an extant work of French prose.’

So I’ve slowly been working on trying to pick out some of the anecdotes from Agnes’ biography and figure out how to weave them into a story for children. I’m not really very confident about my ability to write a children’s book; but we’ll see how it goes.

Here’s what I have typed up so far (I have more but it’s handwritten notes.):

The Princess Who Refused to Be Queen

Long, long ago in the kingdom of France there was a princess who was as good as she was beautiful.

Her name was Isabelle and her older brother, Louis, had been the king of France since their father died when Isabelle was only two. But because Louis was only twelve when he was crowned king, their mother, Queen Blanche, ruled the kingdom until he was old enough to rule for himself.

Isabelle was a beautiful and graceful child. Her parents had no other daughters and loved her wonderfully and perhaps even spoiled her a bit. She had her own pony and many beautiful clothes: silk dresses with golden threads adorning them, ribbons, lace, even a silver belt. She had maids to help her dress and comb her hair and bring her food.

But all her fine clothes and rich possessions did not prevent her from being good and holy and from loving God. She understood that the only true nobility is the goodness of the soul and comes from living a holy life a holy life, not from royal birth or palaces.

She said her prayers every day. She often hid under the blankets when she prayed, resting on her elbows and knees. One morning when a servant came to pack up the beds and blankets as they were departing, he thought the blankets were just twisted up. He went to pack them up and the startled Princess Isabelle cried out. Her damsels came running in fright and the servant was frightened and astonished. The princess was a bit scared herself, but her brother the king was amused and loved to tell the story.

And here are the notes that I took as I read, but not at all in any kind of order:

She preferred to stay in her room and study Scripture instead of going to court entertainments with the wives of her brothers and the other ladies. She worked with silk to make stoles and other church vestments and altar clothes and such.

When she was given images of Jesus and Mary, she loved them more than any other presents or ornaments and received them joyfully.

Her mother liked to dress her in rich clothes and jewels. She was just as good and holy when wearing her fancy clothes as she was when wearing religious attire. But she considered her greatest adornment her love of Christ and her devotion. She didn’t love the pretty clothes her mother gave her. She was very sick with a fever as a child was thought to be at the point of death. Her mother had gone away on affairs of the realm and was sent for along with the king her brother. He mother sent everywhere asking for prayers and a very hold person told her mother that Isabelle would recover but her heart would never be in the world or for things of this world. After that day she never put on any rich adornments, robes, or ribbons, or jewels but gave herself entirely to prayer and works of perfection and the religious life.

She had a fine saddle horse. She wore a silver belt over silken dresses adorned with golden threads.

She had very beautiful hair and one day she noticed that her ladies in waiting were carefully keeping every hair that fell from her head as they were combing. When she asked why, the replied, “Lady, we are keeping them so that when you are a saint we will keep them as relics.” She laughed at this, thinking them very silly.

She could not stand that any evil should be said about another in her presence or that she should hear any lie. When people came to ask for alms she would send to them and have it said to them before they came into her presence that they were not to speak anything but the truth and if they said the whole truth she would more willingly help them.

He parents had decided she was to be married to the son of the emperor of Rome, but she refused. Pope Innocent IV wrote to her begging her to consider how many benefits her marriage would bring— the potential for settling a longstanding quarrel between the French crown, the emperor, and the Pope, but she was determined to only be the bride of Christ. When the pope realized he could not persuade her, he wrote back and praised her desire to be a virgin bride of Christ.

Isabelle’s love for abstinence and silence. She would make private vows to abstain from food.The Queen would offer 40 sous to the poor if Isabelle would take a bite of bread. And would also bribe her in a similar way to say a single word to her brother the king.
She would fast three days a week. She’d fast all day with her only meal a bit of vegetable soup and some split peas. She would be served plenty of dishes and good food and would send it all for alms and for the infirmaries of religious and eat from the worst and very little. For each morsel she would eat she would put aside 10 as alms and through the whole meal would be in prayer and silence. She would often get up before the women who served her and give thanks devotedly and attentively.

She had the Divine Office said and would listen devotedly and attentively. Would rise for matins before daybreak would not go back to bed. Would remain in prayer until midday. Would have those who served her eat before she did so she could remain longer at her prayers.

She would rise to say matins before daybreak and would not go back to bed but would continue in prayer right up to midday. Then she would go from her oratory to her chamber and until nones would study the Bible, the Gospels, the lives of the saints. She understood Latin very well and would often correct the letters her chaplains had written for her.

She often confessed even every day and devoutly. She would have her confessor sit before her in her chapel so she could see him and make sure he didn’t fall asleep or pay attention to other things. She would also have her ladies in waiting sitting a little way off where they couldn’t hear but could see her and the confessor while she confessed.

She would visit the sick herself and would comfort them with her holy words and advisee them on the salvation of their souls and serve them with her own hands and sent them her goods and sit with them a long time and feel their pulse. She had a pity for those who were afflicted and a zeal for the salvation of souls.

Between the time of her office and the time she dined, she would spend hours receiving a great multitude of poor people in her own chamber and would serve them bread, soup, and wine and other food with her own hands. She gave private alms to poor and to religious more than can be counted.

She sewed with her own hands a cap that the king her brother asked for, beseeching her most graciously that she would give it to him and he would wear it on his head at night. She responded, “I propose that it should be given to Our Lord, for it is the first that I have ever sewn.” He beseeched he, “Sister, then I beseech you that you sew another one that I might have,” and she responded, “I would be pleased to do that if I sew more.” And she sent the cap secretly to a poor woman who was sick and whom she visited every day with special dishes from her own table. Lady Jeanne and Lady Perronelle of Montfort heard of the affair of the cap and secretly went and bought it from the poor woman, giving as much as she would take for it. The nuns of St Antoine guard it as a relic. 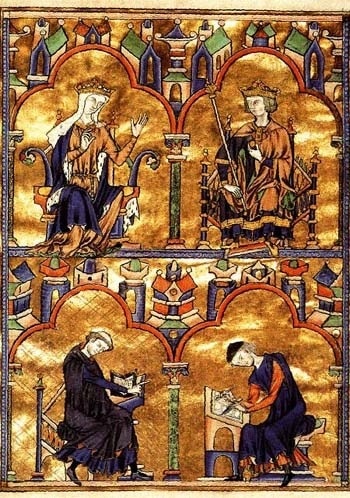