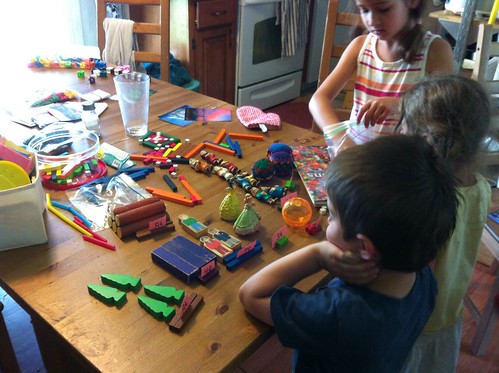 Ben and Sophie contemplate the possibilities at Bella’s bakery. I bought a princess cupcake for only three cents.

I’m trying to get back into the swing of things with school after essentially taking off the month of July, an unscheduled summer break. My goal now is to try to do something schoolish after breakfast every day.

Today we did math. (I hoped to do reading too, but math took all morning and that was fine.) I had no plan, no book. I just dumped a bunch of flash cards and manipulatives on the table to see what happened. It was magic.

First, Ben and Sophie and Anthony held up various cards and asked me to read the numbers: good practice in learning to read numbers, right? Then Sophie found cards with simple addition problems and so we worked them out with the counting bears. 2+2=4, 4+4=8, 8+8=16. Sophie loved it.

When I’d spent some time with Sophie, I called Bella back in—she’d drifted away when I wasn’t paying attention to her. I set Bella to figuring out how to make ten with various combinations of Cuisinaire rods. Bella got very involved in making patterns, but did some of the math problems as well.

Sophie did a lot of different addition problems with the bears. She made some circles for the bears to play ring-around-the-rosy and I asked her questions: How many red bears are in the circle? How many yellow bears? How many bears are in both circles together? Then Sophie found the clock and wanted to learn how to read it, so we practiced both digital and analog time. I sent her to the clock on the microwave and helped her read it. She had problems with both the 10 and the 20, so I pulled out the flash cards she’d been reading minutes before and they helped to jar her memory. Then we went and set the hands on the analog clock to match. For the first time I noticed the clock’s hands were color-coordinated with the numbers. The hour hand and the big numbers were red. The minute hand and the little numbers were blue. Oh! That would have been nice to notice when I was teaching Bella.

After that Sophie played with the snap cubes, making an alternating pattern with white and brown.

I helped Anthony identify bears by colors and match colors. Ben kind of did his own thing with the bears and then with the Cuisinaire rods and I didn’t interfere with him too much.

Bella decided to make patterns with the Cuisinaire rods and used them to measure things. We measured the index cards, a short section of straw, the salt shaker, etc. Then she decided to set up a store with some price tags we’d made previously. She stood the tags up with the matching rods (I’d suggested she match the tags and the rods) the 3 cent tag with the 3 cm rod, the 4 cent tag with the 4 cm rod, etc. She then placed objects on the table for Ben and Sophie to buy (it was a bakery). So they used coins to buy little “cupcakes” and “gingerbread men” and such. I even made her make change when I bought a 3 cent princess “cupcake” with a dime. I’m not sure she really understood the process, but at least I tried.

Oh and I also wrote 315 on the white board in Egyptian and Roman numerals and the girls had to figure out what it was. That was fun. 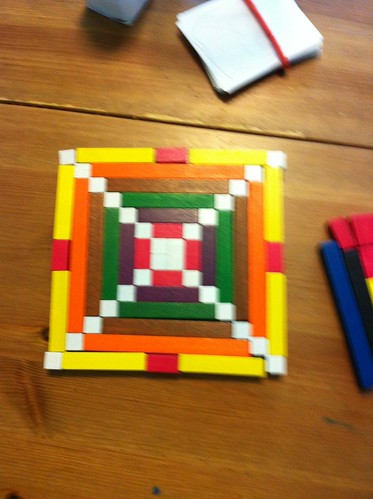 Bella and I collaborated on this pretty design. She says she wants me to sew a quilt with this pattern.

After our math lesson I watered the garden and we looked at the various plants that have sprouted and tried to guess what they were, what kind of flowers they will have, and compared leaves. Then we wrote some postcards bought in Maine. Teh kids dictated and I transcribed what they wrote and then helped them sign their names.

We had an interesting theological conversation prompted by the history book, which said the Chinese emperor was searching for the water of life. Bella and Sophie thought that was funny and wondered why he believed in that. I pointed out that we believe in the water of life too, that Jesus promised it to the Samaritan woman at the well, that it poured from his side at the crucifixion, that we all received it at our baptisms. So maybe the emperor was anticipating Christ in a way.

Tonight at bedtime we read a bit more in the History of Counting and talked about the importance of zero.

Also today I baked currant scones for breakfast and baked a loaf of bread in the afternoon. I’m finding it helpful to do the baking in two stages: gathering the ingredients and then combining and baking. So I gathered everything for the scones last night before I went to bed. All the dry ingredients and the bowls, measuring cups, spoons, etc. Then I was able to throw them together pretty fast before all the kids woke up. (Anthony was the only one awake at 7:00.) Likewise, I gathered all the bread ingredients after I ate lunch and mixed the dry things in the bowl so that after I put Anthony down for his nap all I had to do was mix in the wet stuff and knead the dough. Then i read to the big kids during the two rises.

Dinner was easy: burritos with leftover pork chops from the freezer and quesadillas for the kids.