Pharoahs and Pyramids at the Library 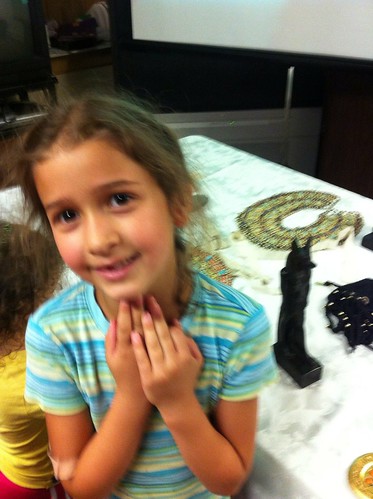 You should have seen the look on my seven year-old’s face when I told her there was going to be an Egypt talk at the library. See, she’s had this Egyptian life and culture picture book since she was a toddler. I picked it up at a library book sale and the bright colors and detailed pictures called to her. Even though I had it shelved with my books rather than the children’s books, she sought it out time and again.  She used to spend hours amusing herself by making up stories about the pictures. And then last fall we read about Ancient Egypt for her history class. (We homeschool.) And oh boy did her love for Egypt take off then. We checked out just about every book on Egypt the children’s section of the library had. We visited the Egyptian rooms in the MFA. And then she began to play Egypt with her little sister and brother.

As we walked into the library on the day of the talk my four year-old exclaimed that his favorite Egyptian was King Tut. The five year-old exclaimed that she loves Khufu. The two year-old doesn’t have a favorite yet, but give him a couple of years. And my eldest daughter’s enthusiasm was so catching that when she ran into some of her friends they decided they wanted to come listen to the lecture too. 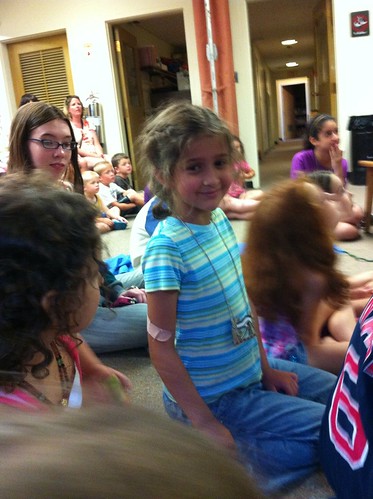 Too bad the librarians goofed. The website said that this talk was open to all ages; but judging from your reaction you meant it for upper elementary school kids and older. As you surveyed the crowd I could tell you were disappointed that the audience was so much younger than you expected.

I understand what it’s like when you don’t get the audience you anticipate. I understand how hard it is to tailor your talk on the go. And that you might just be uncomfortable talking with younger children. But still, every time you mentioned how young they all were it kind of rankled. After all these kids came to see you. I thought you might try a bit harder to make them feel welcome. I understand editing the story of Osiris. I didn’t for my kids, but different parents make different choices. And sure, it made sense to trim the talk and skip over some things.

But I felt like you underestimated your audience. Or at least made some assumptions that might not have been valid. At the beginning of the talk you made an attempt to assess the audience by asking them what grade they were in school. And you seemed to assume that told you how much they might know about Egypt. But you know that’s kind of a big assumption. Not only do homeschool kids often study things in a different order, but even kids who go to public school sometimes opt to learn things on their own. My friend’s daughter had the same kind of intense fascination with Egypt at six too. A better tactic might have been to ask kids what they knew. Could they name a pharaoh? Or an Egyptian god? Did they know what this picture was. My daughter could have answered all sorts of questions had you asked.

Several times during the talk you made reference to the young age of the audience. It sounded like a brush off. These little kids couldn’t possibly be interested or understand. So you talked over their heads to the parents. How rude and patronizing!

Nonetheless the presentation was dramatic and very interesting. I learned quite a few things I didn’t know yet. And the children were very engaged. And I loved all the hands-on props. It was awesome that you let them wear the jewelry and feel like princes and princesses.

And we lingered after the presentation was over. You might remember us as the last ones there. I was kind of hoping my very quiet girl might have a chance to ask you a question or two about what it’s like to go to modern day Egypt. Or what it’s like to go into a pyramid. Or who knows what she might have asked if given the chance. But first you were talking to some other moms with older kids. And we waited patiently and looked at the artifacts. Then as soon as they left you began directing the head librarian in the task of cleaning up. Oh well, I thought. She’s obviously busy. I thought maybe we might still squeeze in a question, but you ignored us except to make a patronizing remark about how young all my kids were. And when I tried to start a conversation, telling you how much my daughter loves Egypt and has been to the MFA, you were dismissive. We couldn’t get a word in edgewise because you were busy talking to the librarian and answering her questions. Message I got: little kids don’t count in your book. Only big kids. And mothers with babies strapped to their chests are obviously not worth your time. I was sorry to have such a great experience end on such a sour note.

Fortunately I think most of that was lost on my little girls who just loved the chance to learn a little more about one of their favorite subjects. I just wish they could have shared their enthusiasm with you and had a chance to ask you questions one on one and to have their love for Egypt appreciated by an expert. 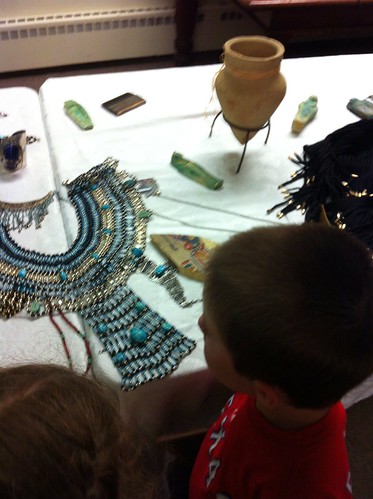