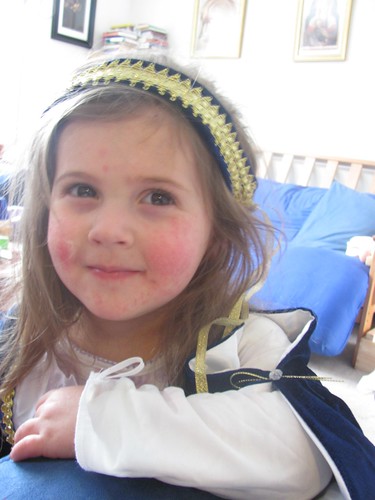 Sophia has been presiding in her new princess robes all day. (She even napped in her dress!) Evidently she’s Princess Rose. Everyone is deferring to her and my mom is calling her “Your Majesty”. This form of address has cause some confusion, however. “I’m not ‘Your Majesty’” Sophie protests, “I’m Princess Rose.” So we tried to explain that Your Majesty is a form of address, it’s the proper way to talk to a princess. But she just protested further, “Majesty is not the name of my dress. It’s a wedding dress.” Just so. 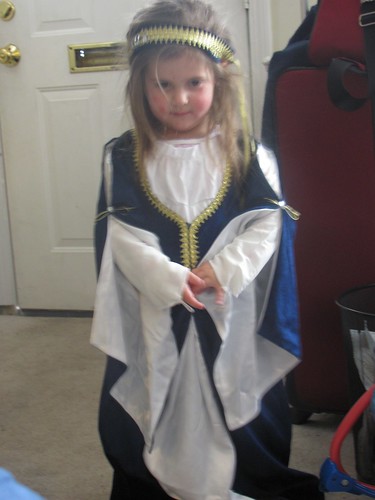 I was a bit concerned that Bella might be bit jealous of Sophie’s new finery, not having as fancy a dress to wear herself. But instead I woke up to the sounds of Bella, who seems to have appointed herself as Her Majesty’s chief courtier, giving Princess Rose a royal tour of the house. Bella has been a sort Lady in Waiting, appreciating her sister’s princess status without seeming at all to covet it. 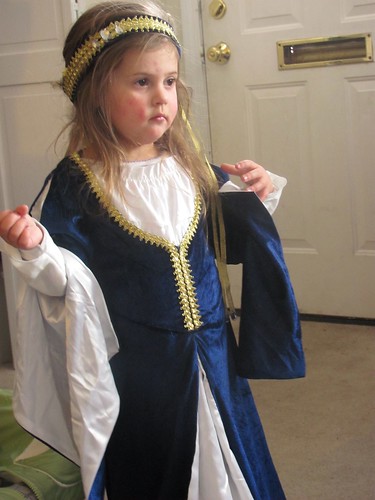 Sophie walks into the living room and announces, “The princess is here!” She certainly knows what adulation is due to her new lofty state and is not at all abashed to be her own herald.

Her Majesty is a thoroughly modern princess. She’s got the kitchen timer and is busy pushing buttons, “I’m sending a message,” she announces. Then she puts it to her ear to chat with someone. Evidently it’s a smart phone. 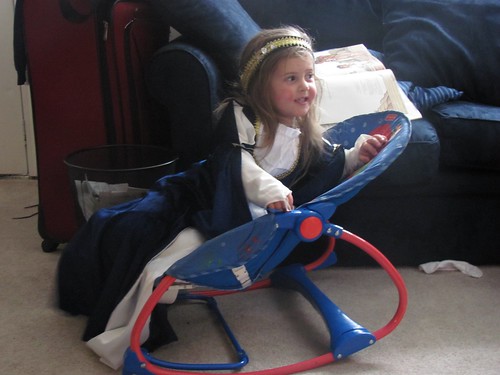 One of Sophie’s presents was a wooden puzzle with jungle animals, pairs of mothers and babies. Sophie immediately pulled out all the pieces to do the puzzle, while Bella named the animals: giraffe, elephant, lion, zebra. Then Bella asked, “Why don’t the herons come off?” We were so impressed that she knew the birds painted on the border of the puzzle were herons. Where did she learn that?