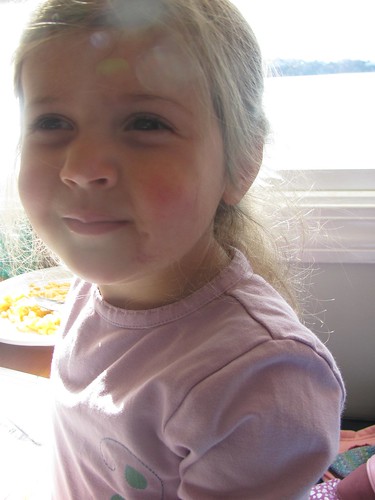 Tonight at bedtime Sophie started narrating everything she was doing in the third person.

She’d been wandering about talking to herself for a while. That’s not unusual at all. But then she walked over toward the couch where we were sitting and we heard what she was saying: “She picked up the water and drank it.” And then she did as she’d described. She continued to narrate her actions. Some of it was a factual account of what she was doing. Some of it was whatever her pretend world of the moment was… going shopping or riding on a train or taking her pretend children to the doctor, I couldn’t quite catch it.

It was funny. But what pushed me over the edge into laughing out loud was when we began our night prayers. We always begin by blessing ourselves with holy water and then blessing each other. Sophie continued to narrate throughout. She put holy water on my forehead: “God bless Mama, she said.” Then Dom’s forehead, “God bless Daddy, she said,” and on through the whole family. Everything she said was punctuated by “she said.”