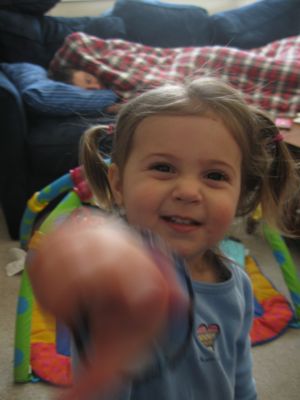 For months Sophie has been saying this… noise. It’s always said in the same way “Awwww wiss” chanted over and over and over again. She said it so often Bella picked it up and started chanting it too. I couldn’t figure out what it meant and neither girl could illuminate me. It’s been bugging me because I was sure it didn’t come out of thin air.

Today finally I put the pieces together and figured it out. Sophie was singing long strings of syllables that I couldn’t make out, each time the string ended with a little pause and then the familiar aw wiss. But the rhythm sounded familiar. Really familiar. Wanna wanna wanna… aaaw wiss.

Suddenly it clicked: I sang to myself Holy Mary Mother of God… Pray for us. Yep. That was the rhythm. That’s exactly what Sophie was doing, singing a Litany of Saints just like I do so often when I’m singing her to sleep.

I was positive on my identification but for added confirmation when I went around the corner I saw that she was holding the saints alphabet book. I often ‘read’ that book to Sophie as a Litany when the text seems like too much, skipping the saints’ bios and just saying each name and “pray for us”.

Such a relief to finally understand those nonsense syllables the girls had been singing. And Sophie was thrilled that I knew what she was saying.