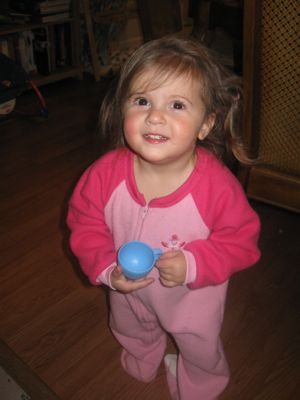 I got Sophie some new fleece footie pajamas this week, hoping that perhaps the reason she keeps waking everyone up at night is because she’s waking up having thrown the blankets off and is cold and can’t get them arranged to her satisfaction.

Last night she wore them for the first time and was thrilled, thrilled, thrilled to have new ‘jamas. So much so that she absolutely had a conniption this morning when I took them off to get her dressed for church. Usually she loves getting naked. But not if it means forsaking her new jamas.

After Mass she took off her dress as per usual so she could eat the customary pancakes. Then she ran around for a while in just her tights and Mary Janes. At nap time I insisted that she needed to get dressed. She threw a fit. And then I suggested maybe she could wear her ‘jamas. End of protest.

Now she’s awake and refuses to take them off again. She’s put on her jacket and hat and thinks she’s going out. But I’m standing firm: not in the ‘jamas.

And yes, she slept all through the night last night. For the first time in weeks and weeks. Now if I can only figure out how to get the other two to let us sleep…. One down, two to go. 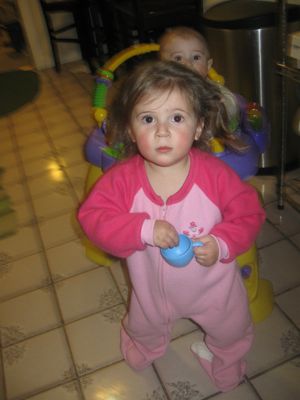