My niece, Chiara, had a party yesterday to celebrate her fifth birthday. We met up with her family and a few other families, mostly from the Catholic homeschooling group, at Chuck E. Cheese for pizza, games, and cake and ice cream.

Bella had fun. There was a toddler-sized play area and she enjoyed the slide, the mirrors and pushing the buttons on the games. She climbed up on a few of the rides and didn’t even miss the fact that I didn’t put a token in. It’s all the same to her if they move or not.

The only exception was the carousel. I plopped in token after token so she could ride round and round on the shiny horse. Every time it stopped I got a pouty little face and a whine. 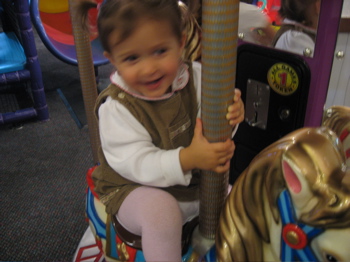 Confession: I actually had to tickle her to get her to smile. It was past her nap time and she was having fun but had a rather serious expression. 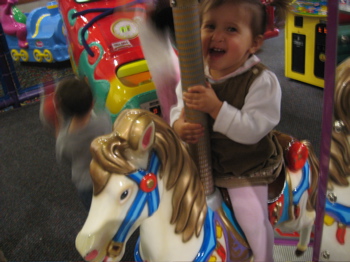 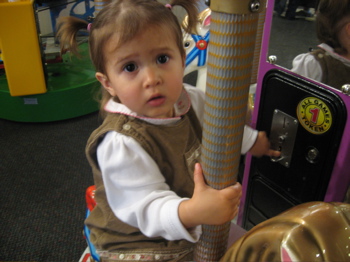 “Put another token in the slot, Mama!”

The party was from 12 to 2, not ideal for us as that is when she usually naps. But she survived like a trooper. Bella ate lunch before we went so she only picked at the pizza and had a few bites of cake and ice-cream. I, on the other hand, had far too much of all of the above plus two cokes. I am such an addict. I try to be good and don’t really drink it very often. But when I find a soda fountain that has the mix of carbonation and syrup in just the right proportions… well, my will power lost. I paid for it too, feeling slightly ill the rest of the afternoon.

She did take a good two hour nap when we got home. But then bedtime was a horror. She was overtired and screamed and screamed when I put her down. My attempts to rock her and console her were to no avail. The poor thing cried herself to sleep.