Icicles in the shadows: Writing with my daughter
4 comments
Share:FacebookTwitter
Home schoolingIsabellaNature studyWriting and Composition 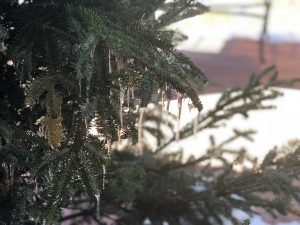 The aged Christmas tree on the patio is festooned once again with icicles. The snow on the roof is in full sun and is melting and dripping off the eaves. The melt falls onto the tree, which stands mostly in the shade, only the tip top where the star or the angel should be has a little ray kissing the bare poking stick. But most of the fronds are still green and fresh as if the tree had just been cut yesterday. And near the bottom, in the shadows, the tree is growing strange crystal needles. No craftsman could form such perfect, delicate bobs of ice. None of the artificial icicles I’ve seen can hold a candle to this delicate lattice of dripping ice, a sculpture which is constantly changing, growing, diminishing.

Beneath the boughs the squirrel scampers, seeking sunflower seeds to stuff his cheeks and restore his winter-depleted fat reserves. He jumps up on the concrete paver which is holding the cooler’s lid down. When I approach the window he doesn’t budge. Can he not see me or does he just not care? Only when I tap against the glass does he startle down to resume his foraging on the sandy patio bricks.

No birds today. The feeder is strangely quiet. But they do tend to favor cloudy days for some reason. When the snow is flying, we’re sure to have crowd. But on bright days like this when the clouds are scudding cotton puffs, they must be off finding other sources of food.

I want Bella to work more consistently on writing, so I’ve challenged her to spend at least ten minutes a day on composition. She can do a free write or work at something more formal, she just has to do ten minutes. And to help her be accountable, I will join her and write for at least ten minutes myself.

Today she’s been revising an old oral narration which I’d scribed for her– sometime last year, I think– about Julius Caesar crossing the Rubicon. When she picked up her composition notebook she started re-reading it and decided she wanted to change some of the words and phrases. “Bicker” instead of “anger”, for example. The original piece was already strong. Her revisions, almost all done on her own, are really insightful and make it a much stronger piece.

On my part, I decided to take as my inspiration an observation Dom made this morning about the icicles forming on the Christmas tree which is still standing on the patio. And then I added in a bit about the squirrel I saw foraging about.

Bella’s composition:
(She said I could type it up for her and share it here. She’s very proud of her story and wants to publish it. “So people can read it. It’s a story and is meant to be read.”)

At the bank of the Rubicon an army stood. If you had stood there with them you would have seen a man on a white horse. That man was Julius Caesar, commander of Gaul and Spain.

As well as that, there was Pompey, Caesar’s rival, who was general in charge of Rome and commander of the Roman fleet.

Pompey’s charge extended to the Rubicon so that crossing meant war, war with Pompey. Caesar weighed the possible outcome of the war. After several minutes of thought, he spurred his horse into the river, crying out, “The die is cast!” And thus the Roman Civil Wars began!

Bella said her composition was drawn from two different books, one about Julius Caesar and one about heroes of Rome, which was kind of dry, but gave her some good information about the Plebeians and the Patricians and also the anecdote about Pompey.