Little Girl in a Big World: Recent Adventures with Bella 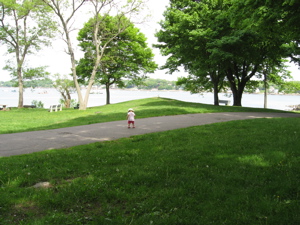 Yesterday Dom and I took Bella to the park, always an amazing adventure. She is so incredibly fearless, you put her down and she just takes off. Never looks back, never waits for approval, off she wanders, down the path, across the beach, a little girl in a big wide world.

The first task was just getting her out of the parking lot. So much to explore, she could have spent the entire trip just playing with the metal barricade and wandering back and forth across the asphalt. Finally, I scooped her up and carried her down to the beach.

The tide was out and the expanse of sand was enormous. She ran gleefully from one rock to another, from one shell to another. Each one more exciting than the last, scooped up as a valuable treasure and then carried along, one clutched fast in each chubby little fist. Only to be forgotten completely when in two paces she found another, better one. Every one was the pearl of great price.

I loved the way her little legs would keep going even after she’d spotted a new prize and begun bending over to grab it. She’d have to reach back down between her legs to get at it. And the way she kept falling down, only to pick herself up as if nothing had happened, and continue on full steam ahead.

The best moment was when she found a live clam. Just as she reached it and squatted down to grasp it, I realized that the tow halves of this bivalve was still connected and had an animal inside. I thought it was dead and imagined my little girl with a handful of rotting seafood. I was, of course, too far away to do more than yell a useless, “NO!” But, as it turned out, it was still alive and squirted out a stream of water—something I’d only seen in cartoons. Fortunately, the stream was pointed away from her. Imagine her surprise had she been greeted with a face full of water. We had to pry it out of her hand, of course, to toss it back into the ocean. She didn’t surrender her treasure readily.

After she’d fallen on the mud flats and acquired a nice coat of grime, we retreated from the sunny beach to the shady walk where we could lounge on a park bench while she wandered about. Of course, we had to jump up a few times to rescue her from herself.

Her great find here was a large stick. What is it about little kids and sticks? Even as young as she is, she was swinging it around like a sword, using it to poke and prod at everything, and naturally sticking the end in her mouth. This last happened just as daddy had swooped her up to bring her back within range. My heart almost stopped as I pictured Dom swinging her down and the stick jamming itself into her mouth. 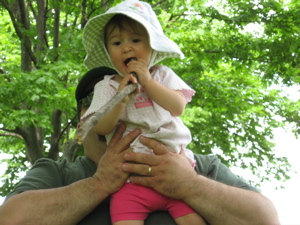 I love going places with Bella. Everything is brand new, exciting, a big adventure. The grandeur hasn’t had time to wear off yet. And she teaches me to see things again, as if for the first time. She teaches me what childhood is, what creation is, what joy is.

Today we visited Dom’s brother and Bella played with her cousins and went swimming for the first time. She was a little uncertain at first. Even though the water was heated, her little teeth were chattering. But she didn’t complain. She splashed a bit and was quite content to be carried around. A little overwhelmed at the rough splashing of her older cousins, four boys; but never fussy.  Even when mamma lost her footing and Bella got an unexpected dunking, she sputtered a bit but didn’t cry. Such a brave girl.

Fearless, too as she stumbled around along the poolside. Her first act was to trip in the open filter intake just as John was cautioning us about it. Oops. But she wasn’t hurt and just waited patiently until I rescued her.

She threw beach balls and climbed on deck chairs, played with goggles and laughed with her cousins. We had a cookout and strawberry shortcake. (Just strawberries for Bella.) Food, fun, family. A good day. 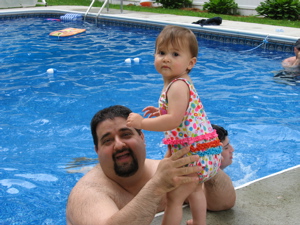 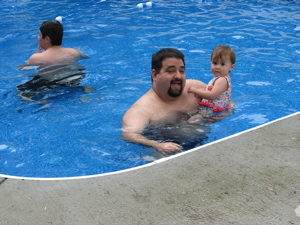 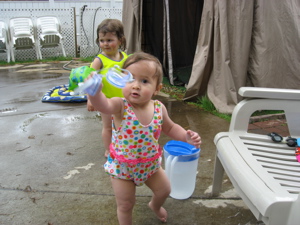 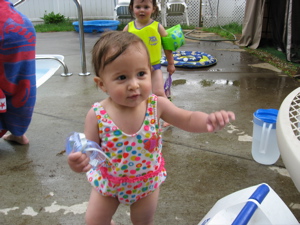