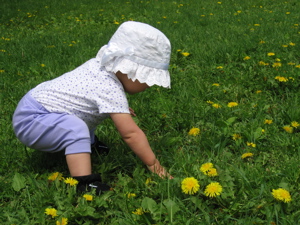 Poor Bella woke up early today and in a very bad mood. Later, I discerned that another tooth is pushing its way in, her top right canine. I administered some analgesic drops and a frozen spear of broccoli and all was much better. Bella doesn’t like teething rings filled with cooling gel, but loves shredding the frozen broccoli. And gets a little green vegetables in the bargain. Everyone wins.

Bella’s new skill is climbing. The other day she climbed to the top of the stairs leading to the second floor. (Fortunately, we’re very friendly with our upstairs neighbors and they don’t mind her playing on their landing.) She was so proud of herself; but her mother’s heart almost stopped a couple of times during her endeavor. She repeated the performance the next day with less hesitation.

We don’t have stairs in the apartment; but she’s been making do with climbing into the new front facing car seat my sister-in-law brought over for us and into a small toddler chair that’s still a little big for her. Dom is terrified she’s going to fall out of the chair and bang her head, a very real possibility, especially when she insists on standing up in it. She’s already tipped the car seat over while climbing on it.

She’s learning so many new words, many more than she knows how to say. The other day I asked her where her book was and she went and picked it up. She’s also having fun pointing to her dolly’s eyes, ears, mouth, hands, hair, etc. And she thought it was hilarious when I tickled the dolly’s belly. Sadly, I’ve also had to teach her the phrase “no biting”. But she does know what it means and responds appropriately when I yelp and tell her to stop. It would, of course, be better if she didn’t bite in the first place. We’re working on that.

I’ve also a few times heard her very clearly say her own name: Isa-bel, in the midst of a stream of babble. She’s not very interested in talking other than mama, dada, yummy, “ruff-ruff” (for dogs) and occasionally “nana” (banana).

Yesterday at the park I put her down in the middle of a field of dandelions. She tried to walk, but was having difficulty with the uneven ground. She’d only take a step or two and then stumble. But every time she’d pick herself right back up and try again. Except when she got distracted by the grass which had to be picked or the pebbles which begged to be put into her mouth.

We also have a new game that makes her giggle: I put a plastic Chinese-style soup spoon down the front of her shirt and she pulls it out and drops it on the floor. I pick it up and put it in her shirt front again. We can repeat that with much laughter for a good five or ten minutes.