I woke up feeling sick, so it’s amazing anything got done at all.

Everyone did math and copywork. Bella and I worked on her dictation sentence. Sophie did a French lesson and read to me from her geography.

Storytime: Carry on Mr Bowditch, Life of Our Lord for Children, Hippos in the Night, St Anthony of Padua, Story of the World.

Put out the statue of St Lucy. Looked up the recipe for Lucia bread. Got distracted by the internet rabbit trail and instead listened to Lissa reading Hannah’s Christmas first. Then made the bread.

Everyone did their usual Miquon math and copywork. Sophie finished her copybook. I’m going to have to start making her copy pages. It was the most productively creative day we’ve had in a while. Lucy got down the pattern blocks and she and Ben played with them. Bella’s math required cutting some squares, rectangles, and triangles and that led to more cutting and shapes. Ben and Sophie ended up playing war since the basket with the playing cards had somehow fallen down.

Storytime: Carry on Mr Bowditch, Life of Our Lord for Children, Hippos in the Night, Lucia Saint of Light.

Everyone did Miquon. Sophie did several pages. She’s been averaging two to three pages a day, on a roll. Everyone did copywork. Bella copied a short paragraph out of Peter Duck. Sophie copied a stanza from a Chesterton poem I wrote out for her, switching to printing since yesterday she finished her cursive copybook. We need to figure out a plan for ongoing copywork for her. Anthony read about St Basil and copied a sentence. Ben did a page in his workbook then copied a sentence.

Bella narrated from Archimedes and the Door to Science. And then we talked about the origin of zero and I read her an online article about the development of zero.

Storytime: Carry on Mr Bowditch, Hippos in the Night, Life of Our Lord for Children, St Jude.

Then I read a few more Christmas books that Lucy and Anthony picked out, everyone came back to listen though. Good King Wenceslas, Legend of the Poinsettia, and a book that was a retelling of the Christmas story

Bedtime stories: finished reading The Story of Holly and Ivy. 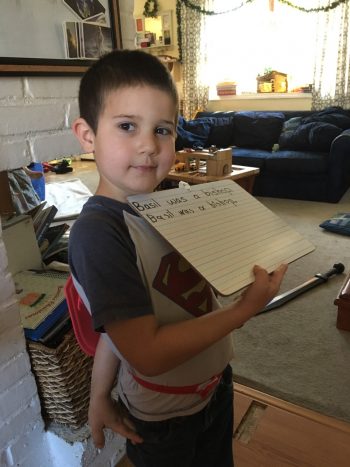 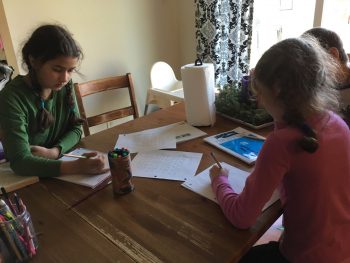 Sophie did math before we went grocery shopping. Nothing else accomplished. We’re all getting a bit sick, I think.

Afternoon stories: Carry on Mr Bowditch, Hippos in the Night, Life of Our Lord for Children, Story of the World.

Bedtime story: I really can’t remember. Something Christmas-y, I think.

Dom’s brother John and his friend John were replacing the floor in the dining room and hall so I took the kids to the Museum of Science for the day. The kids made bobsleds and raced them against the clock and each other; sorted and classified animals, looked at mammal skulls and at painted turtles and various fish; climbed in the model space capsule; played balancing games; examined dioramas of New England wildlife. We saw an Omni Theater film about dolphins. We visited a special exhibit about Leonardo da Vinci’s world which had some of his notebooks, reproductions of paintings, lots of his inventions fully realized as life sized models. To the kids the best thing, though, was the working trebuchet and trying to hit the toy castle with a little ball.

We listened to Lord of the Rings going and coming.

We mostly took off the week before Christmas. I was fighting bronchitis all week, the house was a mess with the not quite finished floor replacement, and I wanted to just get ready for Christmas. I only took notes on one day, but to the best of my memory, we might have done some of our usual read alouds on Tuesday.

Went to the doctor with concerns about bronchitis because I was still sick. Was diagnosed with viral bronchitis, told to check in if not feeling better by end of the week.

I think everyone did schoolwork, but I didn’t write down notes. I did totally forget to go to my afternoon allergist appointment because I forgot to set a reminder and I was in the flow with read alouds.

Everyone did math and copywork. Anthony read me his saint story. Sophie also did French and read me geography.

Bella wrote in her timeline, looked at her Latin, practiced some cursive, reviewed her dictation sentence, did copywork.

Afternoon stories: Carry on Mr Bowditch, Life of Our Lord, Story of the World, Hippos in the Night. Good narrations.

Bedtime story: Aeneid for kids, tied in nicely with SOTW reading about Carthage.

On Thursday we did the grocery shopping. Didn’t take time for school before we left, did minimal read alouds in the afternoon. I think just Carry on Mr Bowditch.

On Friday we all took the day off. John came and finished the floors and I did some baking. We made Christmas cookies and gingerbread and challah for Christmas Eve. I also went to the allergist and she gave me a prescription for an antibiotic to fill if my cough didn’t get better. I woke up on Saturday with a slight fever so sent Dom to the pharmacy when he went out to get lobsters for our Christmas Eve dinner. I was so very grateful I had that prescription.