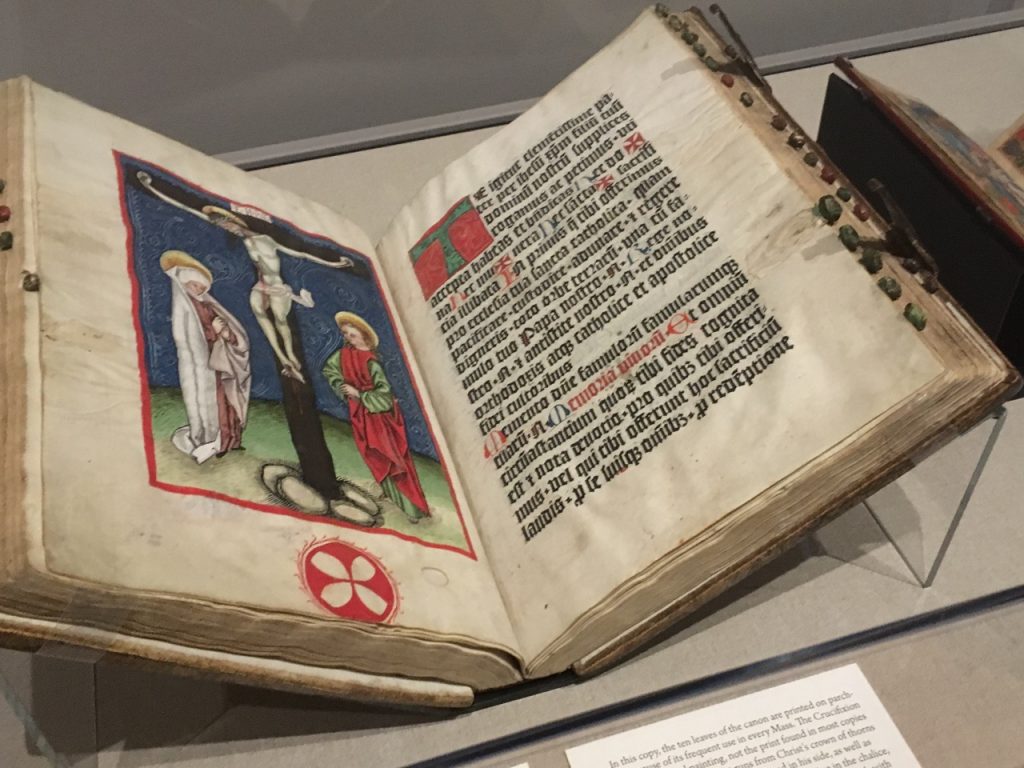 On Sunday as I sat in Mass and my mind wandered (not during the homily, which was excellent) I had Saturday’s dazzling feast of illuminated manuscripts fresh in my memory when my eyes fell on the missalette: dull newsprint pages with boring type, no pictures, no bright colors to delight the eye. A purely utilitarian book, words on a page, but nothing for the imagination, nothing of beauty. Suddenly I was almost crying at the lack of beauty. 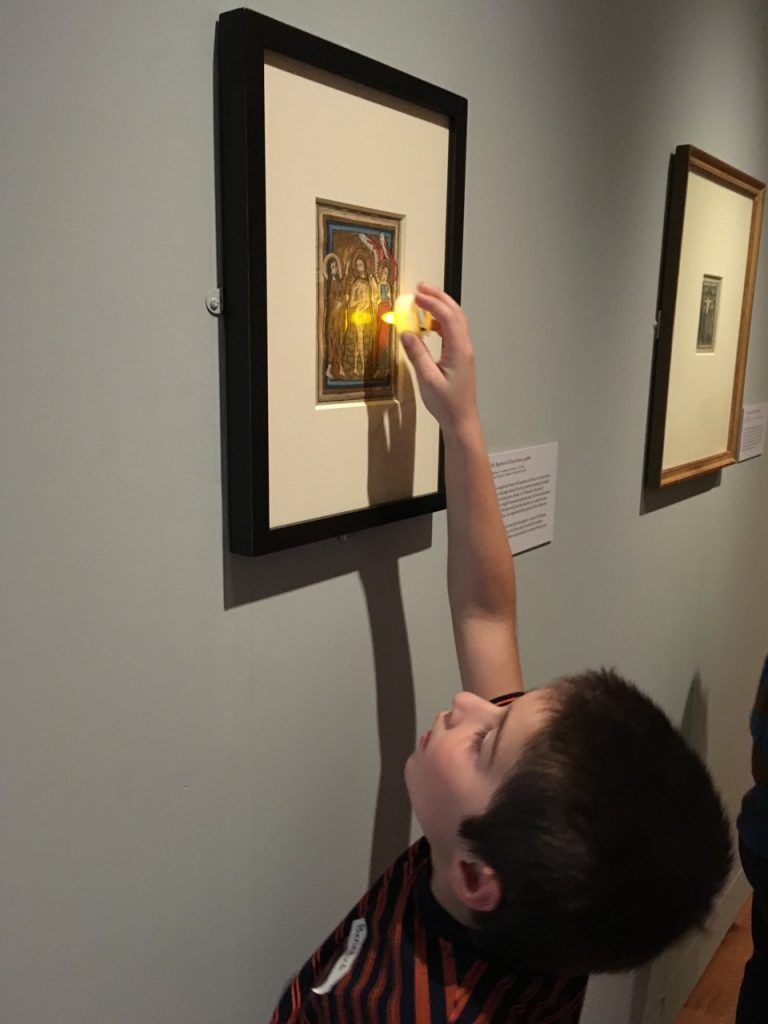 There they were in my mind’s eye: those beautiful handmade books, each one the product of thousands of hours of manual labor from the husbandry of the animals whose skins made the parchment, the butchering and the skinning, the hours of processing, scraping, soaking and trimming to prepare the sheets of parchment. The hardening and cutting of the quill, the preparation of the ink, the ruling of the page and the careful writing of each letter and the painstaking scraping for every error. And then the illuminating. Sketching the figures and the foliage, the capitals and the creatures. Applying the glue and then the gold leaf and carefully brushing away the excess gold, the burnishing and polishing. The preparation of the pigments: hours of grinding in a mortar, the pestle crunching, the arm aching. Mixing each pigment and then, finally, the careful application of layer upon layer of color. Details finer than fine made with brushes often only a single hair-width. As we watched the video about the making of an illuminated manuscript I was staggered by how many hours go into just one page of one of those books. You had to be fabulously wealthy to own any books in the era before printing presses. And one of these masterpieces… I can’t comprehend how valuable it was. 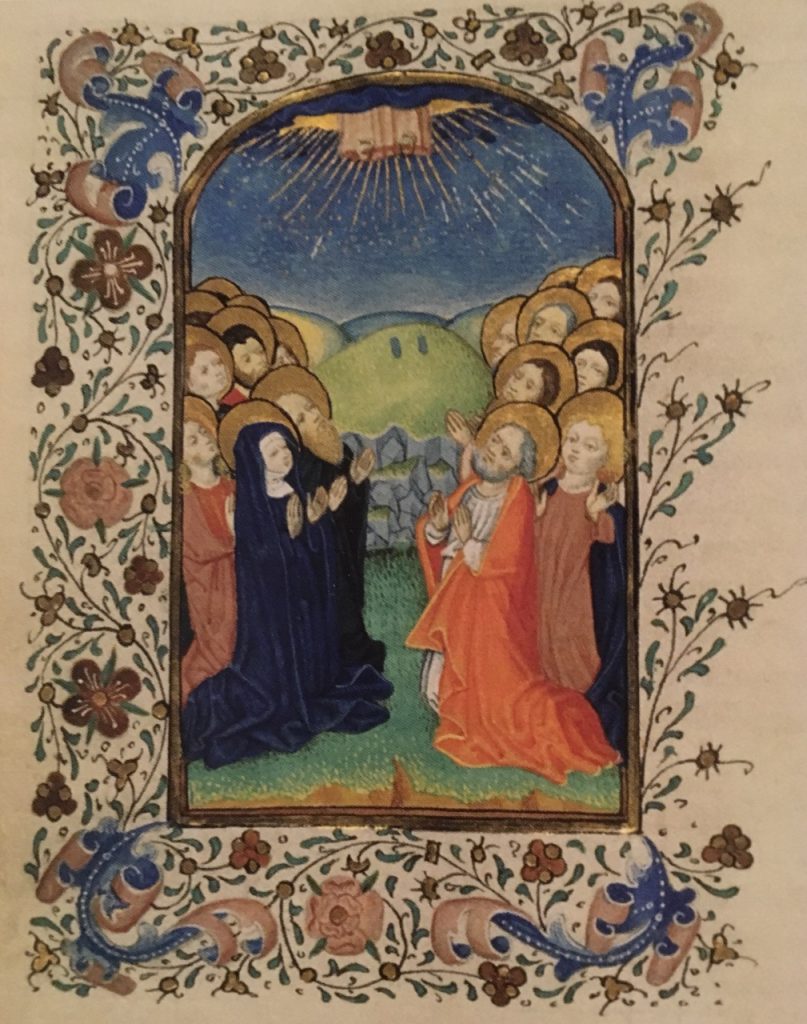 Each page a treasured work. Is it any wonder the books were so often cut apart and the leaves sold individually, framed individually? Each in its own glass case, shining bravely against the dark.

And now we can mass produce stunning full color reproductions for so very little money. But we don’t. We could have gorgeous jewel-like Mass books for every person in the church for a fraction of what one page of one of those manuscripts cost. No longer are beautiful books only a luxury for the rich, with today’s technology they could also be a feast for the poor.

I long to fill the pews with beautiful books, with a crucifixion page to contemplate during the consecration. With annunciations like little jewel boxes and Pentecosts like poems, all the most exquisite images. And between the pictured pages, beautiful prayers to recite and beautiful songs to sing. Like a deer longing for running streams, I thirst for all that is timeless and shimmering. I long for beautiful Mass books. 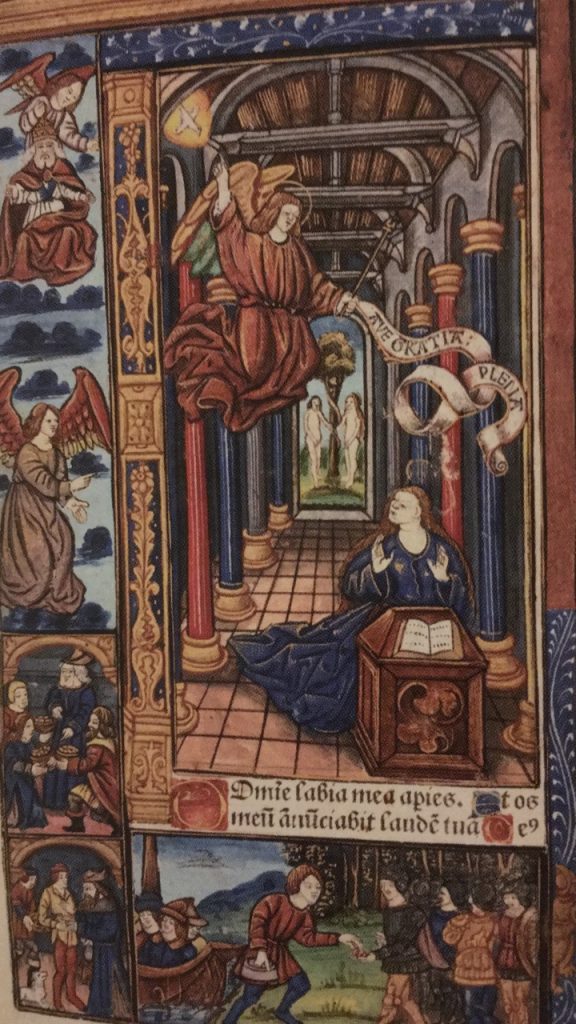 Amy Welborn recently wrote, in a slightly different vein, starting from a very different point, but coming to a very similar conclusion about her desire for Mass books for children:

Magnifikid is good, but is a disposable and for Sunday Mass.

I would love to see a publisher produce an inexpensive, attractive, but not twee or childish Mass book especially for groups of Catholic children. It would include the main parts of the Mass in English and Latin, the rite for Benediction, and a few pre and post Communion prayers. That’s it. Nothing more fancy than that. Sell it in bulk, teach schools how to teach their kids to use them, and boom. More choices, more active participation than just sitting and watching the first grade trail up the aisle, hands folded over chests for their blessing while not singing “Our God is Here.” Yes, there are children’s missals, but I am thinking about something that falls between that kind of vinyl-bound actual book and a flimsy pamphlet and that is not as picture heavy as a typical “Mass for Children” book. Something that a school or parish can publish in bulk and pull out for Masses and encourage children to use. Perhaps it exists? If so..tell me!

Note that this is not a screed against “how people act in Mass,” even though it may sound like it. Some bloggers do that. I don’t. I stand (or kneel or sit..whatever) in awe of every congregation of which I am a part and indeed, contemplating the diversity of people there and praying for their needs, whatever they might bed, forms a bedrock of my own experience at Mass.

But still, it  bothers me to see all of us – us – just..staring at the Communion line as it creeps up that aisle.

Because it is a struggle to focus, isn’t it? You are curious to see who’s there. You’re starting to think about what you have to do and where you have to go later. Your kids are poking at each other. You know you should be praying, and indeed you want to, for Jesus is here, right now, but you are not a Spiritual Master, it’s hard to concentrate, it’s hard to know what you want to say, what you could say, what you should say, and it’s really hard to know, simply, how to listen, since you know that’s what you should be doing right now, above anything else.

And one of those things that can help are words printed on a page in a small book you’ve slipped in your purse or pocket, words that reflect what others – hundreds, thousands and millions – have found in this moment, in this Presence. It is good to have that book, to open it up right now in this place, present with your own quiet, noisy, still, moving, wandering crowd – to open it up in this Presence, see those words, and join them. 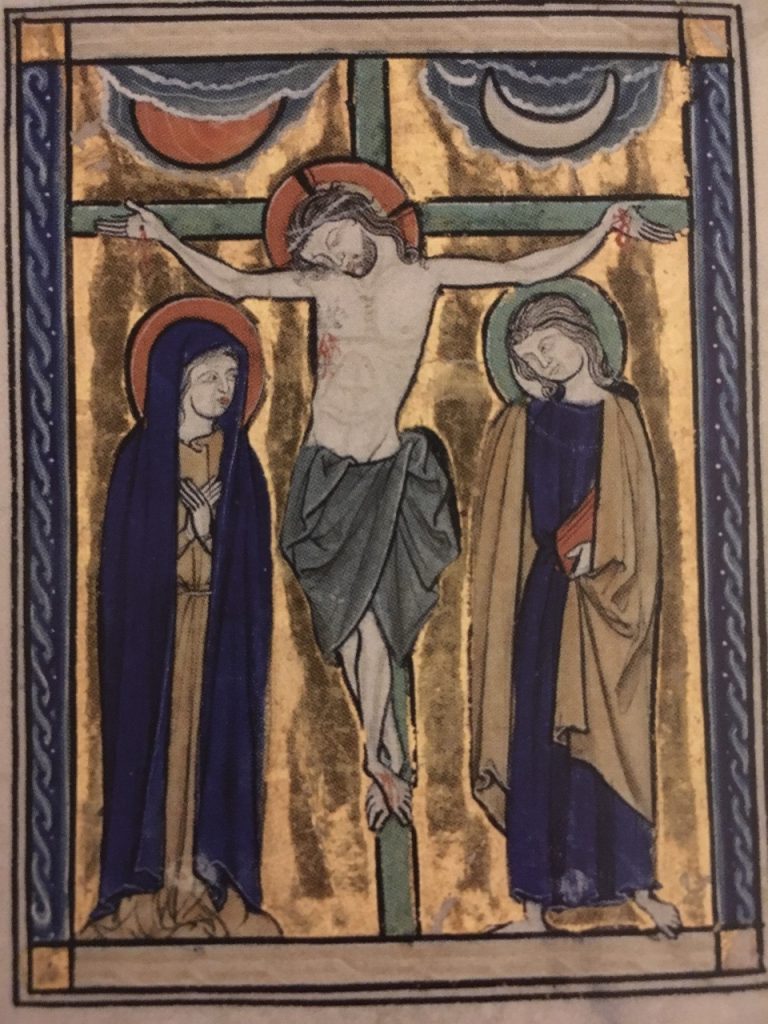 As I pondered those ugly missalettes, I remembered Amy’s musings. I’m not sure I’m on the same page with her about wanting something less picture heavy. But, well, maybe, if by pictures she means the sort of pap that is usually thought of as appropriate for children. Still, my ideal book would have plenty of pictures to contemplate because, as Amy says, different people are helped by different things and one of the things that helps many people is art, but not all churches have art to contemplate. In fact, all too many churches are sadly lacking in beauty worth looking at, but even in those that do have lovely art like my own parish church you still run the risk of the same thing Amy describes, you risk trying to look at the art but getting distracted by the people. So beautiful pictures there in your book, you can look down and lose yourself in the details. And that’s what this art was originally created for, right? An aid in prayer, a window into the eternal. 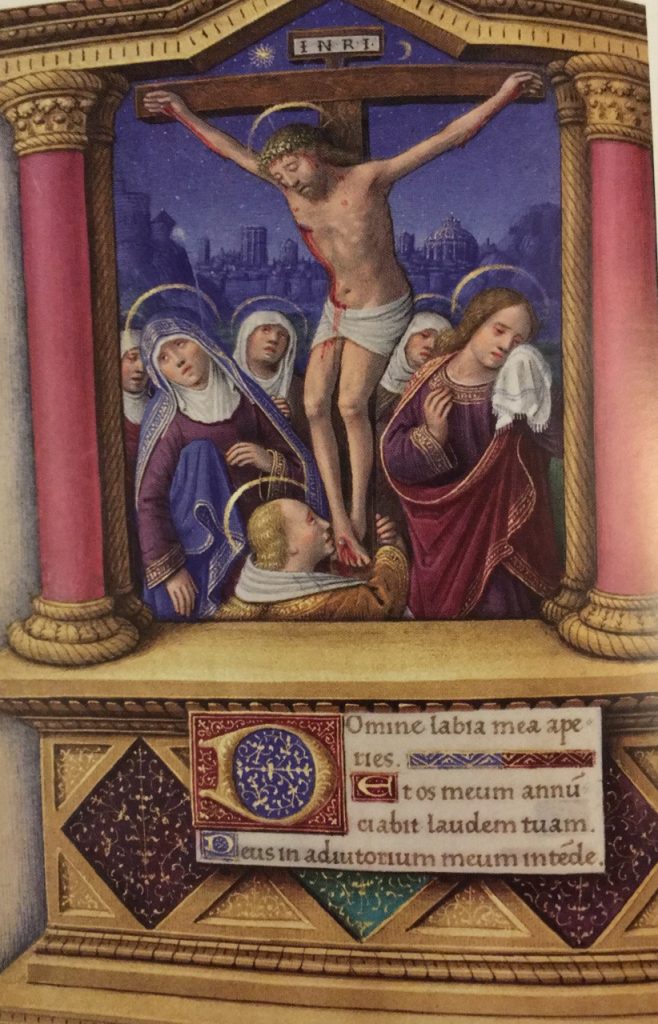 (Why does no Catholic publisher do these things? Are they afraid it will cost too much and too few people will buy them? Fair enough. Dom says we need Catholic entrepreneurs, venture capitalists who will be patrons, who will finance things like this that just need to be done. Who aren’t afraid to lose money, who take the risk because it’s the right thing to do.)

I’m envisioning a hand missal like Amy describes, but not just words, images too. With devotional prayers for before and after Mass, before and after communion. Something for kids, yes, but for adults too, to look at when they get distracted, when they need to focus on prayer, when they can’t see the altar when the eyes and the mind need a gentle nudge to help with contemplation. At our parish in Salem they ordered Magnifikids for all the kids and handed them out at the door on Sunday, but the surprising thing was how many of the adults took them. Even though we had missalettes in the pews the adults liked the format of Magnifikid and found it helpful. Hmmm. 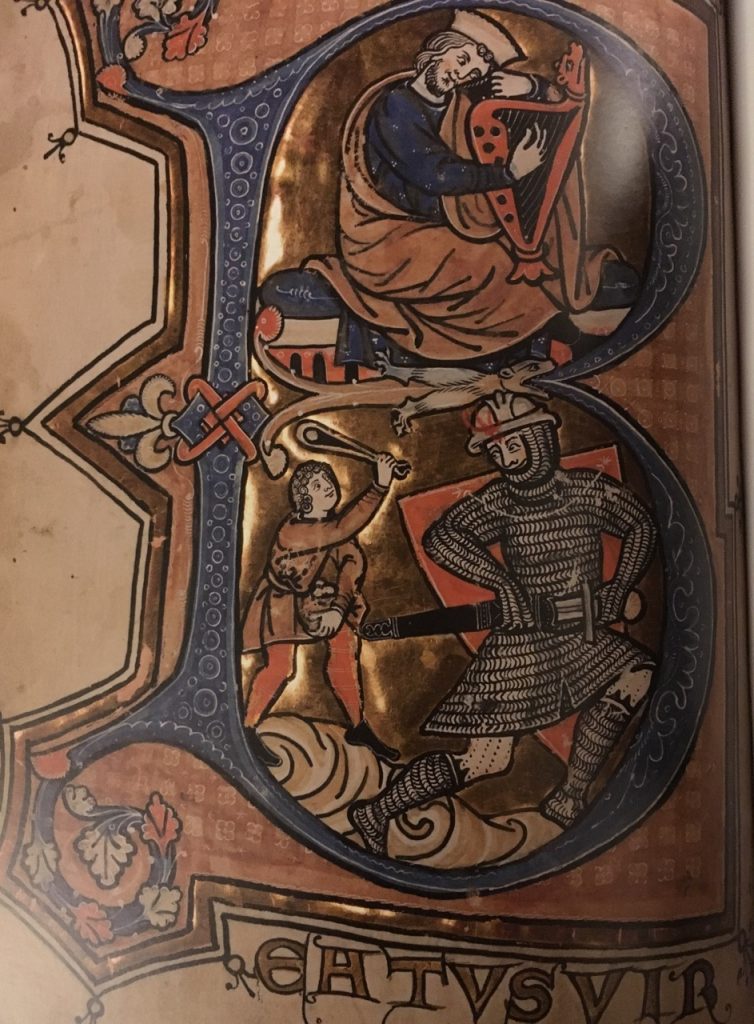 I imagine one book that could be given as a gift to the first communicant, the confirmation candidate, the newly married couple, the aged grandmother in the nursing home.

I imagine toddlers looking over mother’s shoulder at her pretty book. 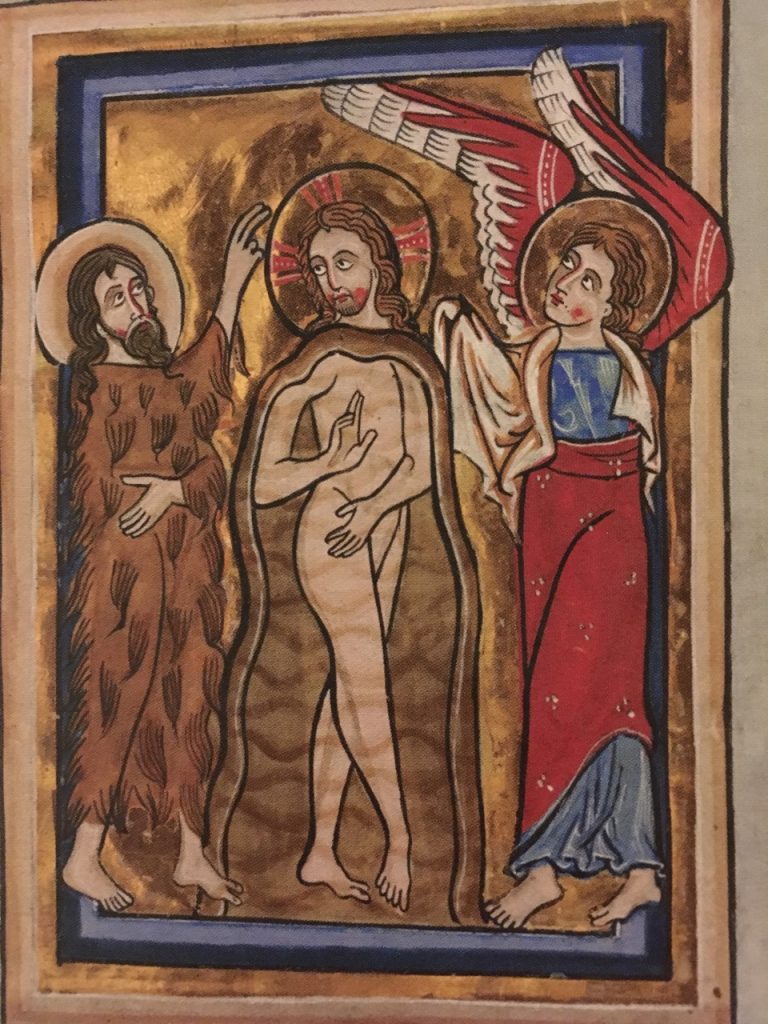 The first communicant whose mind wanders a bit has a beautiful picture to engage her imagination instead of staring at the people in line. The grandmother can contemplate the annunciation and the fall in the same picture. Who wouldn’t benefit from something beautiful right there to hand?

I’ve seen many beautiful books illustrated with great works of art, but I think there’s something special about the art of illuminated manuscripts that should give them pride of place here. Illuminated books of hours and missals were designed to be held in the hand, the pictures are full of fine details to delight the eye and the mind and to feed the imagination. 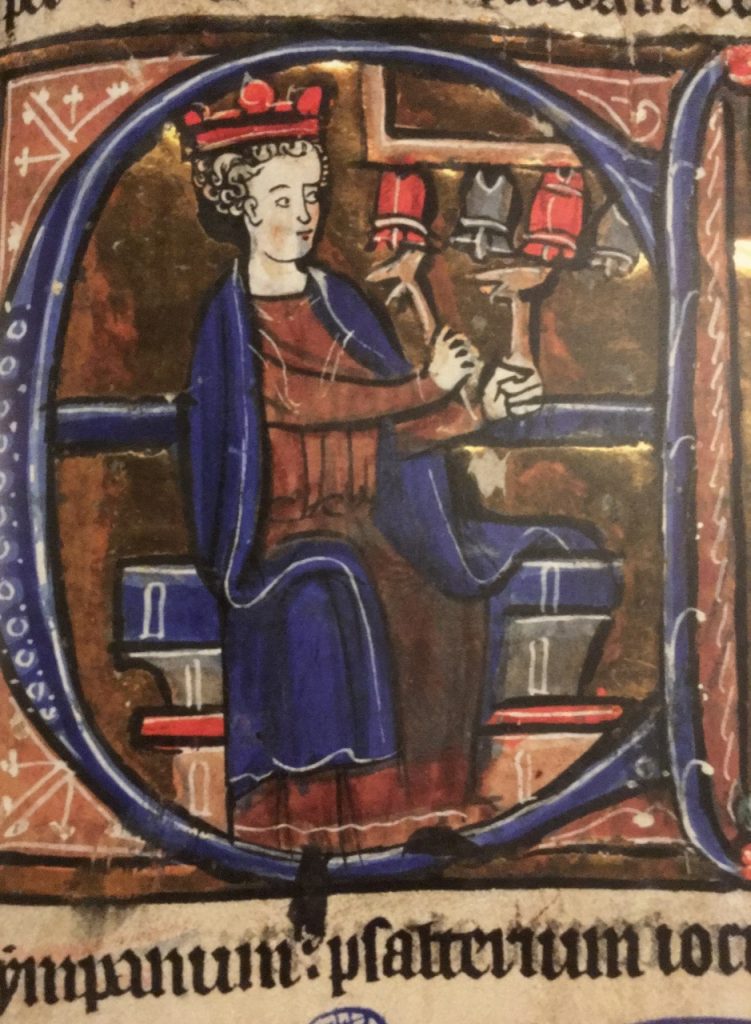