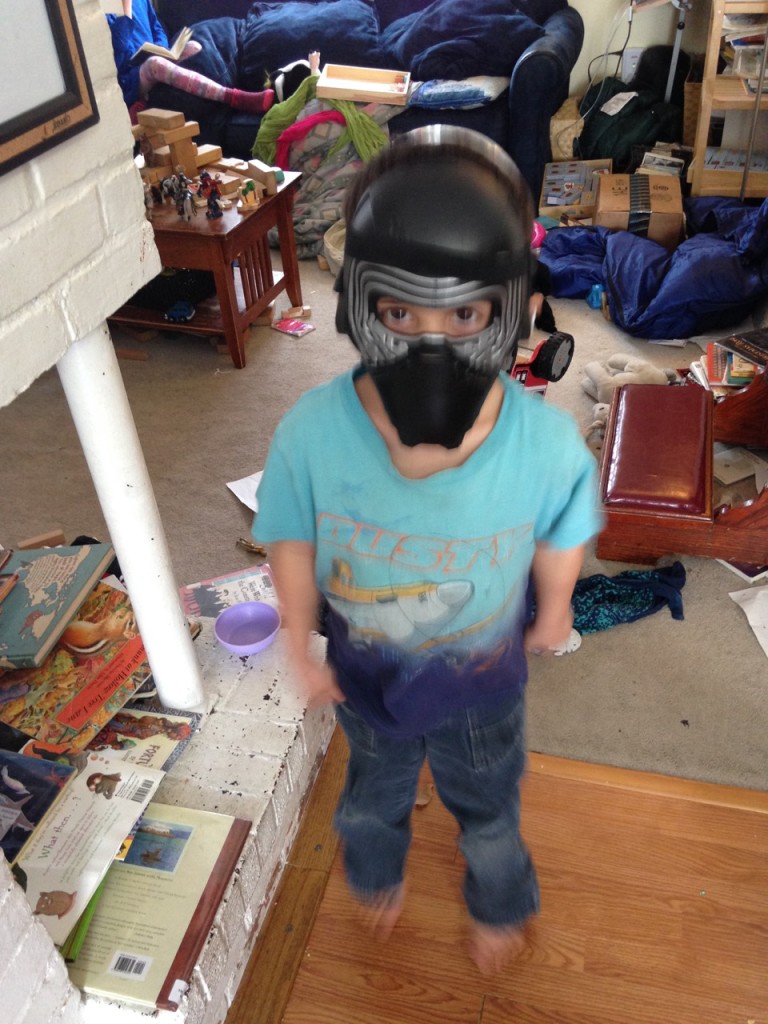 The kids and I watched The Princess Bride on Saturday. They found parts of it very scary but on the whole liked it. The funny bits outweighed the scary.

On Sunday afternoon Sophie and I played Speed with the new cards that teach skip counting.

Bella did math and copywork and worked on her Latin.

Sophie did math, finished her MP copybook, and did cursive.

Math with Ben and Anthony.

Then Sophie and Ben went to play in the snow.

Anthony and I looked long and hard at the picture of the Wedding at Cana in yesterday’s Magnifikid and discussed it at length and then he read me two verses from the psalm, me reading the long words for him and him doing all the shorter words. He’s pretty proficient.

Afternoon stories: Lord of the Rings (The White Rider), Coot Club. Two long selections and Ben and Sophie wanted to go back out in the snow. And so they went out and when they came in Bella went out. (We’re short a pair of snowpants so Ben’s wearing Bella’s until we get new ones.) 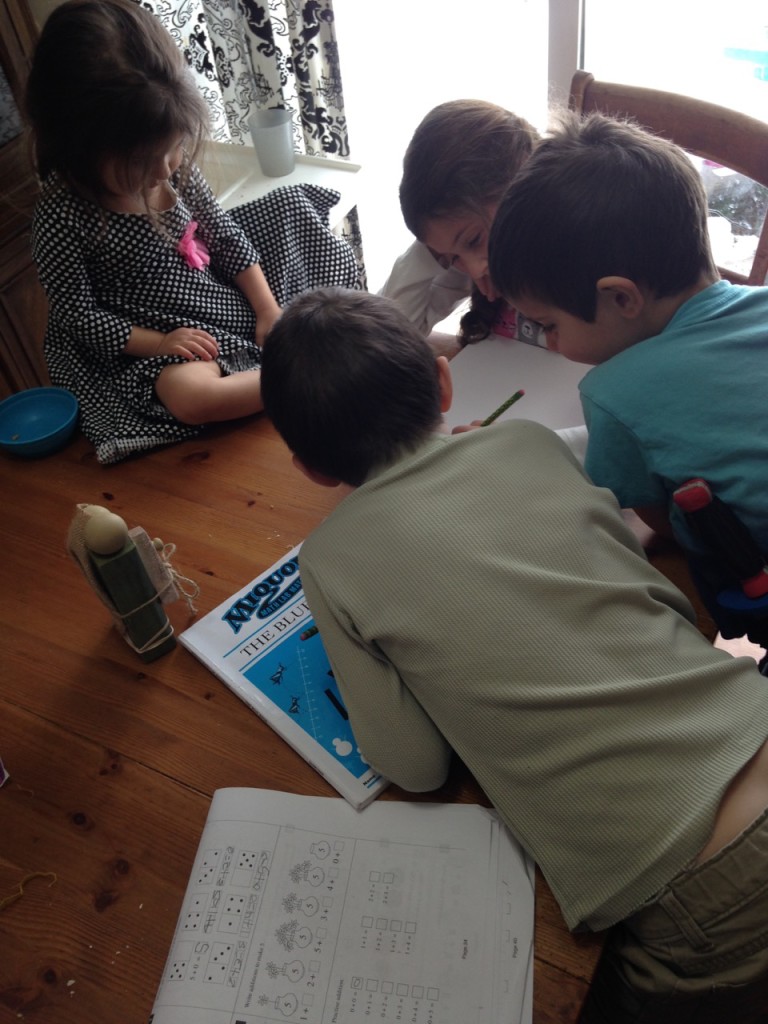 We listened to Beeethoven. I put some Latin sentences on the board. Read the life of St Canute.

Afternoon stories. Faith and Life, really good discussion of the story of Joseph and his brothers in Egypt. Coot Club. Lord of the Rings. Story of the World, chapter about Australia and Ned Kelly.

We went to the library for Bella’s book club meeting about Jane Goodall. The other kids played with toys and read books. 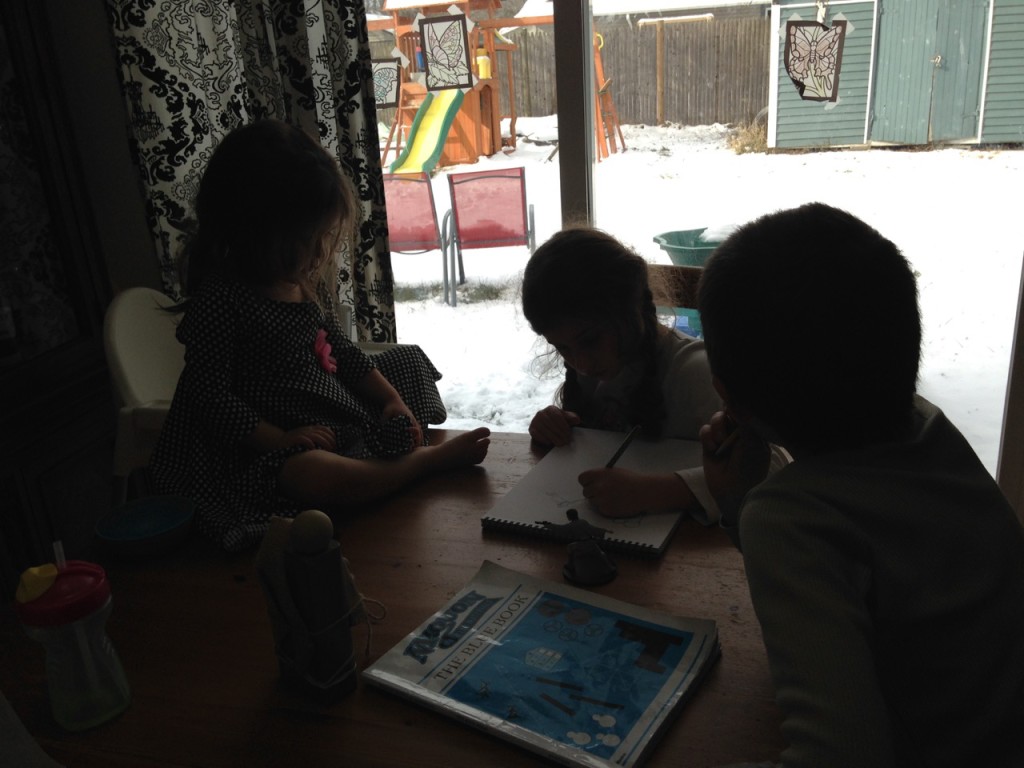 Bella and Sophie did copywork and math and then we spent the rest of the day cleaning house in preparation for dinner guests with an afternoon break to read Lord of the Rings. We desperately needed a housekeeping day and dinner guests were the perfect excuse to go at the living room thoroughly.

Grocery day. Ben and Anthony and Lucy still have colds and Ben spent most of the night in bed with us after a nightmare. So no schoolwork before we went and none got done after either. We did read Coot Club, Story of the World, Then There Were Five, and Lord of the Rings.

Bedtime story: book about trains. Library book for Sophie called Maisie that basically tells a woman’s life. I love that at the end she’s a great grandmother with 31 grandchildren. It’s a pretty joyful story, simple and warm.

In the car we are listening to On the Banks of Plum Creek.

I read the day’s first reading to Bella and we read about St Vincent. We didn’t get to the Gospel.

Sophie did math and copywork. Finished the first passage in the cursive book and illustrated it. Bella did math. The boys were still sick and Ben had a rough night so I didn’t do any math with them.

I did a brief grammar lesson with the girls, nouns and verbs and pronouns and the subject of a sentence.

I pulled out my coloring book and colored pencils and colored and the kids all joined me and we listened to Anonymous 4 singing music by St. Hildegard.

Afternoon stories: Coot Club, Then There Were Five, Mystery of the Periodic Table, selection of picture books including The Friar Who Grew Peas about Gregor Medel and a book about Abraham Lincoln and the Civil War by Patricia Polacco, Strega Nona, and Katie and the Impressionists. Also The Lord of the Rings, the Battle of Helm’s Deep, very satisfying.

Bedtime: Looked at The History of Art and discussed a couple of pictures with Anthony and Ben. Bedtime story was Mouse Soup.