I had an early morning appointment for labs, so I was out the door by 8. When I came home the kids were already outside playing. I took Bella clothes shopping and we found a little trike for Lucy too.

In the afternoon Dom lit a fire in the fire pit and we burned a lot of the dead branches from the garden beds, some old sticks from last fall’s pruning and some of the wood from our dear departed peach tree.

Prayed Morning Prayer and read today’s Gospel. Then Sophie asked how the Gospels end so I read the kids the last chapters of all four Gospels. And we discussed them at length. And discussed them. And why Jesus tells Mary Magdalene not to touch him. And the difference between agape and philia.

And then I read half of George vs George and a long discussion about government and the revolution and defined “tyranny” and “scoundrel” and why signatures are called John Hancocks and why a fat person will die faster when hung by the neck.

Afternoon reading: More All of a Kind Family, Swallows and Amazons, Little Clearing, Faith and Life chapter about the Mass with long discussion about the parts of the Mass, about sacrifices and Old Testament types, Jesus as the Lamb and why lambs were sacrificed. And about participation at Mass.

Then we read Can’t You Make Them Behave, King George? And that took care of history. And The Mousehold Cat because someone was asking about books about Cornwall and it looked interesting.

And then the kids watched the Mammals documentary, lots of marsupials and the differences between those and animals with placentas. Lots of baby animals and several animal births.

Bedtime story: more George vs George. And Cars and Trucks and Things that Go.

Once again we didn’t do any morning school.

Afternoon stories: Swallows and Amazons, two chapters because we couldn’t stop without finding out what happened next. Little Clearing in the Woods, More All of a Kind Family, George Washington’s Breakfast, St Felix and the Spider, The Boston Tea Party.

I really liked King George’s Breakfast by Jean Fitz. A boy named after George Washington who is fascinated with the figure of his namesake wonders what Washington ate for breakfast. He goes on a quest to find out, checking books out of his local library, visiting the Smithsonian Institution and Mount Vernon, and finally finding an old book, published during Washington’s lifetime and thus a primary source, which helps him find the answer to his question. I loved the portrayal of the process of inquiry and research at a level that elementary school children can understand.

We watched an animated video of The Mousehole Cat which I’d accidentally requested from the library when putting books on hold late at night. The children enjoyed it. I appreciated the Making of mini documentary with brief interviews with the author and illustrator of the book and footage of the Cornish town of Mousehole and an interview with one of the animators who talks about the process of animating still images from the book.

Bedtime story: All the Places to Love

I put the math and copywork books out on the table last night. I woke up to children busily at work. Well, some of them. Anthony had figured out how to do a matching exercise: draw a line from the picture to the letter that the word starts with. He’d done it correctly and even explained that he’d been tricked by the football at first, thinking it was a ball and then realizing it was a football.

Sophie did a page of copywork, she’s copying out a poem, and a page of math all on her own. Ben and I did a math lesson, sorting and matching colored shapes and figuring out which shape was missing by laying them out in a matrix.

Bella did a page of copywork, a verse from the Memoria Press book, and then she and I worked on a page of math, I wrote down the answers, numbers that add up to 59. Then she did a page of fractions. Then we reviewed a few spelling words.

Afternoon stories: George Washington’s Breakfast, Swallows and Amazons, More All of a Kind Family, final chapter of Little Clearing in the Woods.

The kids watched Life of Mammals.

Bella and I spent a good long time poring over a US map. I don’t remember what got us started. We looked at the interstates and talked about how the odd numbers are north-south and the even ones are east-west. We followed I90 from Boston to Seattle. We looked at the map key and talked about scales and symbols. Bella figured out how wide Florida is, measuring with her fingers. We found the Mississippi and discussed how rivers often form borders between states. Then Bella explored the map on her own for a while, occasionally asking me how to pronounce place names. She was making up some sort of game. So I think we covered geography for the week.

Bella read three chapters of Little House in the Highlands. Two in the morning and one before bed.

I’ve been making a daily Easter post on Facebook this week, an image of a painting and the verses of a hymn, a little way to celebrate the octave. This morning I showed the kids the image I’d chosen for today, a beautiful illuminated manuscript of Christ rising from the tomb. Bella identified as medieval immediately. They recalled Marguerite Makes a Book. We examined the details, talked about the composition, the way the wings, arms, banners, scabbards overlap the decorative border, the unusual choice of blue with stars for Christ’s robe. The kids passed my phone back and forth and zoomed in on various parts of the picture. After that they looked at the other images I posted earlier this week. We talked about each at length. Art history and catechesis in one. I love that my kids are interested in these things, that they can really look at a painting and discuss it and ask questions about it.

Sophie read me a few pages in the Gennady Spirin Easter book, from the KJV Gospel account. Both pretty difficult selections.

While Sophie read to me Bella did a page of copywork, an antiphon I’d written out last week, and a page of math.

Bella settled down to read another chapter of Little House in the Highlands.

Afternoon stories: We read about three quarters of Shh, We’re Writing the Constitution. They all think the title is hilarious. But everyone got a bit bored with it. Everyone except Bella. Then On Top of Concord Hill and More All of a Kind Family.

The kids watched Life of Mammals.

Bedtime story: Nursery rhymes for Lucy, a library book for Anthony, Frog and Toad for Ben.

Field trip to Lexington for rehearsal of the Battle of Lexington Green and visit to Buckman Tavern. I’ll post pictures in a separate post.

Ended the day with bedtime story of Let It Begin Here, the story of the Battles of Lexington and Concord 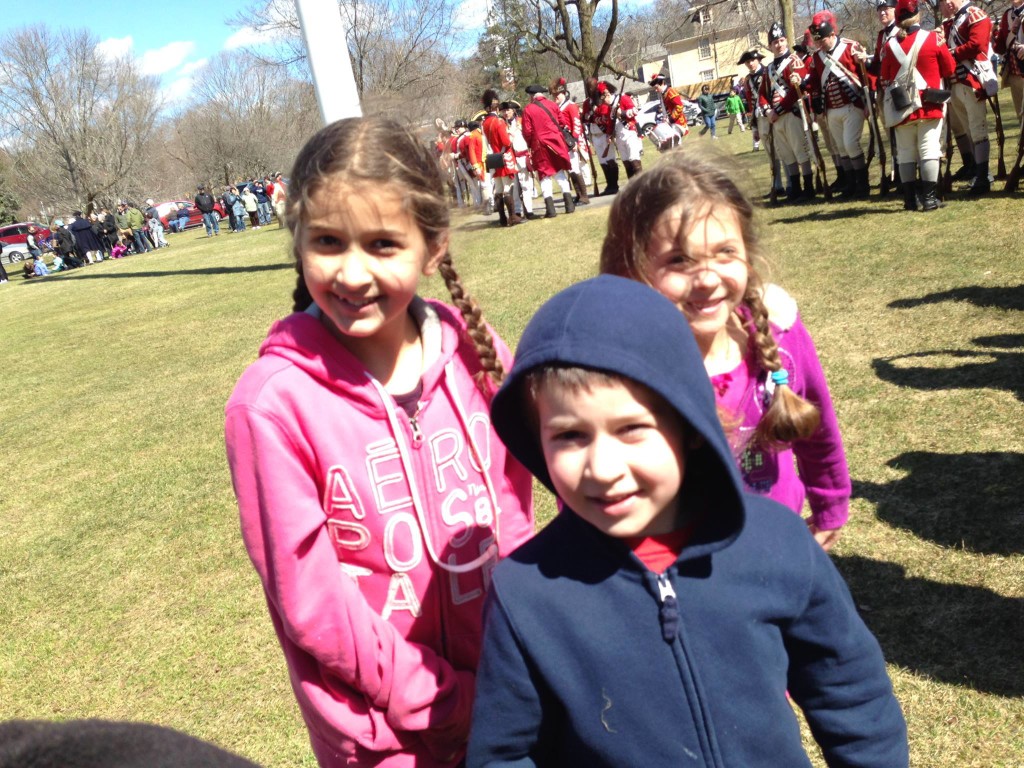