What we did today

This morning Dom came to get me up around 7:30 or 8. Lucia’s been having rough nights and I was not an early riser. I lingered in bed, nursing her and trying to say morning prayer. Unfortunately the furnace was off and wouldn’t restart. Dom had to take a cold shower and called the furnace people. I got up to make hot tea and turn on the oven. I put on a pot of oatmeal because there wasn’t enough bread for everyone to have toast and then I started mixing up the bread which I’d started a sponge for last night. While I made breakfast the kids played and colored pictures of the annunciation I’d printed out the night before. We listened to the morning prayer podcast.

The furnace guy came right as Dom was heading out the door and as I was dishing out the oatmeal to the kids. Dom pointed him to the furnace and told him about the problem and I was grateful I didn’t have to try to explain. I still wasn’t feeling all that coherent since I still hadn’t drunk my tea or eaten breakfast.

After I finished eating and the furnace guy had left I called the doctor to make an appointment for Bella, who has been having a cough, shortness of breath, and a “buzzy” feeling in her chest. They could get us in at 11:15, so I had about an hour before we had to go. I was nursing Luucy again so I got Bella started on her math– she opted to do a lesson from Miquon math instead of beginning the next Life of Fred book. When Lucia was done I taught Sophie a very short lesson from her Saxon math and then got her started on some copywork– she’s copying out sentences from a Christmas board book.

Then it was time to begin the laborious process of getting everyone into socks and shoes and coats. This takes anywhere from half an hour to an hour. Seriously. I brushed Lucia’s hair and got her dressed, brushed and braided Sophie’s hair. Decided Bella’s looked good enough and left her braids as they were. Then I had to put Lucia’s socks and pants back on as she’d removed them.

We made it to the pediatrician’s just in time and Bella got prescriptions for her own albuterol inhaler and a nasal spray– just like mine, I told her. Then off to CVS to pick them up. We listened to the Office of Readings on the way to and from and didn’t quite finish the second reading. It was after noon when we got home. I’d fed the kids an emergency snack in the car on the way home: sunflower seeds, peanuts, and rice cakes. Lucia was out cold when we got home so I put her in the crib and made peanut butter tortillas and orange slices for the big kids and warmed up some leftover soup for me.

Then we looked at images of the annunciation on my computer. First the ones I’d bookmarked and then I did a Google image search for “annunciation” and we scrolled down the page and pointed out our favorite pictures, going to the pages for the ones we really liked to find out more. This eventually ended in a squabble when I got up to fiddle with my bread and left Sophie in charge of the computer and she decided she didn’t want to share custodianship of the trackpad. I found Sophie something else to eat since it turned out she hadn’t wanted a tortilla and was cranky with low blood sugar. She ate some leftover pork roast and string cheese and some frozen mango chunks and felt much better. Enough to read me a Bob book and then finish the morning’s copy work.

Then we settled down on the couch for our afternoon reading– Anthony had refused to take a nap, only lying down for about ten minutes before he popped up again. (His naptime story was Pooh, the one where he gets stuck in Rabbit’s front door.) We read Brambley Hedge– the ever-popular Poppy’s Babies. And then The Giant’s Heart by George MacDonald. The kids all loved the MacDonald, especially the bit about riding on the spiders. Though Ben’s favorite part was when they killed the giant. We didn’t do any of our usual read alouds. I had to break up several fights, cranky Anthony was the instigator. Lucia woke up in the middle of the stories and had to be nursed while I read. Several times. She’s really been cranky.

Then it was time to put the bread into the loaf pans, finally. After that I started on dinner: enchiladas made with the leftover roast chicken from last week. More fighting and I put Anthony in his room where he finally passed out on the floor.

Once the enchiladas are in the oven I sit down for a bit of email and Facebook. I nurse Lucia again, cuddle with Ben. Bella is off listening to The Horse and His Boy on the iPod after doing her copywork (“The Word was made flesh and dwelt among us” was the sentence I gave her) and reading her sentences to me while I made the enchiladas. Sophie and Ben were coloring or playing with the US states puzzle, I think. 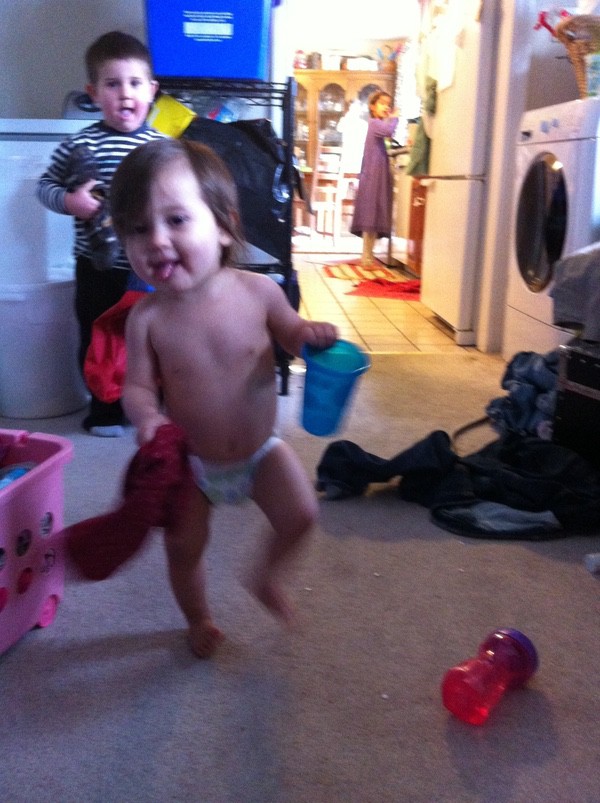 Dom came home, I did some of the dishes, made quesadillas for the kids who don’t like enchiladas. Dinner at almost 7. Then a quick pick up of the worst of the mess, putting on pajamas, tickling Ben, brushing teeth, saying prayers, bedtime story–Dom reading the second half of The Kitchen Knight which they’d started the other night. Lucia nursed and was asleep by the time the story was done. I love it when that happens because I feel like I have more of the evening to myself. I hate it when it takes forever to get her done after the other kids are in bed because I stay up far too late to compensate.

I fed my sourdough starter, reheated a cup of tea I’d made and never drank, fixed a piece of bread with nutella and then watched Castle with Dom while checking Facebook and reading email– my multitasking annoys him a bit. Why don’t I just watch the show? Then I took my shower. Now a bit of time to read and write: a bit from my book about Brother Andre tonight and the rest of the chapter on Pope Clement in Mike Aquilina’s Good Pope, Bad Pope, which I just started yesterday.

I wonder why some days I feel this compulsion to try to set it all down, write everything that happened. There’s a certain satisfaction in it. Maybe because at the beginning of the day, looking at the broken furnace and the wheezing girl and the fussy baby I was sure that I wouldn’t accomplish much. And yet look at all the things that did get done. Sometimes the busiest days are the best.