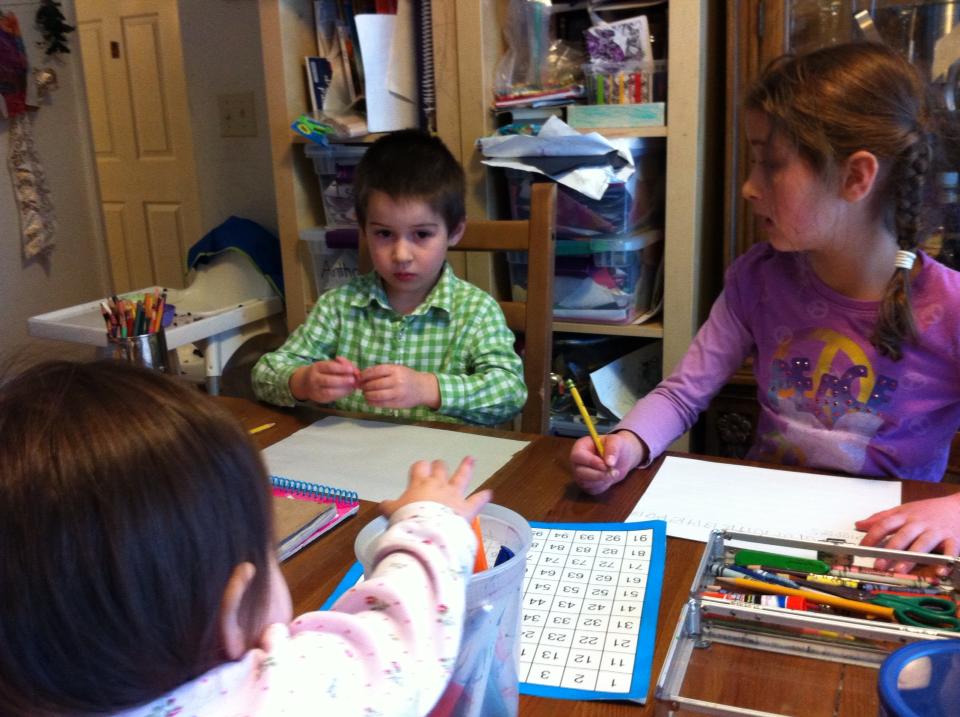 Bella has decided she wants to have a number club. She and Ben and Sophie will all practice writing their numbers together. Ben has decided he wants to learn to write so he’s on board. Sophie is more interested in letters today. Lucy just wants to eat the markers. First day of January school is in session.

Ben: “I’m hungry.”
Me: “Can you make that into a polite request instead of a complaint?”
Ben: “Can I be hungry, please?”
Wise guy.

Anthony is bellowing at Lucy.
Me: “Anthony can you be as quiet as a mouse?”
Anthony: “I can be quiet as a lobster.”
I’ll take that.

Ben says our house is very talky. And he likes it when it’s quiet and he can say what he wants to say. Poor guy gets so easily flustered. And he goes to pieces when he’s interrupted when he’d trying to get a thought out, which happens all the time. I’m trying to help him learn patience and how to express his frustration in a way that doesn’t involve ear-piercing shrieks. I’m not sure I can do much about the talky though. That’s just part of having big sisters and a chattermouth bellowing little brother.

We actually had a grocery store math lesson this week. (This has never happened before because usually I’m way too crazy trying to keep all the kids in line and to get everything on the list and managing the circus that it five kids and a shopping cart.) I asked Bella if a box of butter is one pound then how much does a stick of butter weigh? And if a pound is sixteen ounces then how many ounces is a stick of butter? And if a block of cream cheese is 8 ounces how many boxes do you need to make a pound? Practical math with fractions. Oh and on her own she took a Bob book to read in the car. So shopping didn’t sacrifice school at all this morning. If I hadn’t locked myself out of the house I’d be feeling like I was rocking this homeschooling mom gig.

Oh. Yes. On Tuesday I locked myself and five kids out of the house. When we got home from the grocery store I opened the front door and hung my keys on the hook and then went to the car to get the sleeping Lucy out. I pulled the door almost shut, I thought, to keep the cold out and the heat in. But somehow it shut all the way. And somehow the door knob locked, usually it stays open after I’ve unlocked it with the key. So I tried the back door just in case the kids had left it open, but it was locked. Then there I was in the car with all the kids trying to get hold of my husband and he was out to lunch and his phone was not getting a signal. It was 11 degrees outside and I was getting a bit worried until I remembered that we could just knock on the neighbor’s door. Anyway, we didn’t have to do that because I remembered that the friend he was having lunch with is on Facebook. I sent her a message there and she responded immediately. Phew.

Dom reads The Hobbit to the kids

I had $35 in library fines this week and they froze my account because I just couldn’t deal with Christmas and the library at the same time. All the Advent books coming out once a day and I could deal with new books from the library and I sort of forgot we still had some due. But they had mercy on me and let me do food for fines, which was only supposed to be in December but they hadn’t picked up the last batch of food yet. I probably gave at least $35 in food, which I already had bagged to go to the food pantry box at church.

On Wednesday night during our bedtime prayers Lucy clearly said, “Lord, hear our prayer.” She also does the cute thing where she tries to bless herself, waving her hand in the air. And then she also had something very long and definite to say during the “Thank you, God” section of our family prayers. But we didn’t quite catch what it was.

A thought: Housekeeping blogs by women who have only one child or none are not likely to have much that is applicable to me, no matter how cute their theme. Make ahead pizza dough that makes four pizzas: cook one today and freeze the other three. Um. No. My family will eat all four tonight, thank you. And then ask for more food.

3 Responses to Quick Takes: Back to School for Winter Term