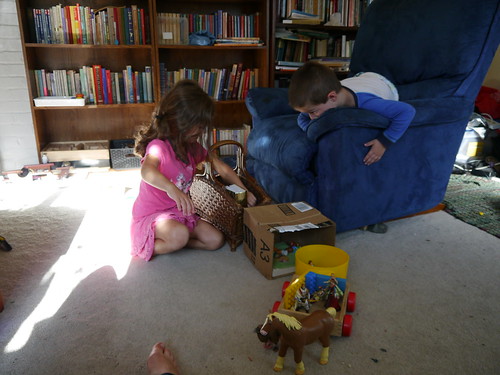 The first few days of our “back to school” week have gone swimmingly. By which I mean they have been chaotic and full of interruptions and missed opportunities. And yet we also accomplished more than I dared hope.

Yes things are crazy. But when have they ever not been crazy? This year we have another baby, a needy whiny two-year-old, a needy four year old who isn’t all that interested in doing busy work and two girls who don’t want to share my attention.

Now I’m thinking: maybe I have an advantage because I’ve never had the opportunity to try to do this without the chaos? I’ve been reading everyone’s Facebook posts about how their first days never go as expected and I kept thinking: I never have had an “expected”. I’ve always flown by the seat of my pants and dealt with the interruptions and the chaos and never had the idea that it was going to be smooth sailing. It’s a rare day when a lesson isn’t interrupted a dozen times with requests for food, toys, diaper changes, nursing babies, all sorts of things. Somehow we muddle through, though. 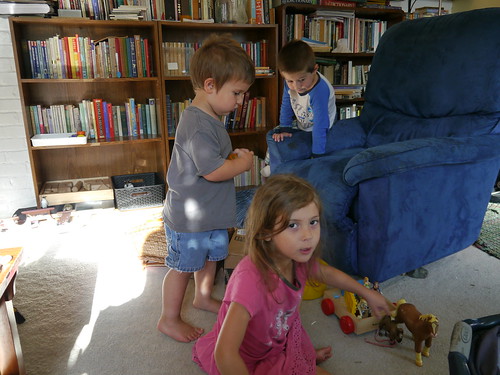 Here’s a brief run down of Wednesday. Just because.

So far Sophie is very happy with Saxon math. She loves filling out the calendar. I have a feeling that for her it will not begin to feel like drudgery the way it did for Bella. Sophie loves worksheets and filling things in. She does them for fun. The first few lessons are supposed to be just getting used to the manipulatives, but Sophie has been playing with them for a year as Bella has done math, so I just made up things to do with the pattern blocks on Monday and Tuesday, making patterns for her to copy, copying her patterns. Today I had her sort the bears by color and count how many of each color she had and then lay them out on the hundreds board to count the total number. She counted each group of 12 with no problems and counted the total to 48 with only one or two snags.

I haven’t got Bella’s math book yet, but I’ve been improvising mathy stuff for her to do. Today I jumped off of Sophie’s stuff and had Bella figuring out how to write the number of teddy bear counters we had using Egyptian numbers. And then figuring out how much money was in the coin bowl by laying out the coins on the hundreds chart. Plus she played with pattern blocks and tangram pieces and did a worksheet from the Saxon 1 book.

I’m focusing on reading and writing with Sophie and not worrying too much about Bella. Sometimes Bella sticks around for the lesson, sometimes she wanders off. Sometimes she answers, sometimes she’s not paying attention. She does know quite a bit more than Sophie and I know it’s boring for her. But Sophie loves it.

Today we did a review from The Ordinary Parent’s Guide and one new sentence. Then she decided to try to write N and G. Then I pulled out the Progressive Phonics and they read the first Alphabet book with me, Ben and Anthony joining in too because it was on the iPad and all things iPad are cool. After the story, which everyone thought very funny, Sophie did the worksheets that went with it and Bella asked for her own set. Both girls traced a page of lower case d, a page of o and a page of g. Then Sophie went on to do a page of dog. Sophie worked on it on and off all day, playing a school game with Ben, pretending to take recess and lunch breaks and then coming back to work. I was very impressed by Bella’s diligence and the care with which she worked. I wonder how long until this kind of work becomes boring to both of them.

Science
I glanced at the science book. Realized Bella knows more about classification of plants and animals than the next chapter demanded and so skipped ahead to the discussion of what a species is. We also glanced at the new botany book that arrived today. And checked on our garden. And she caught a fly. Again. And let him go outside.

They played archaeologist in the back yard. They broke up a rock, dug in the dirt. Weeded my garden bed.

We are reading two chapters a day in The Horse and His Boy. One more chapter to go and we’ll be through. Bella loves it so. Sophie complains but she often gets sucked in to listening too. Though she asks several times: “What is the boy’s name?” She does not have the attention Bella has. But she loves a good story.

Bella and I read a chapter about Ancient China in one of the library books. Yesterday she looked at National Geographic photos of the terracotta warriors after she asked if the excavation was ongoing and I looked up an article about the dig that began in 2009. And we read a chapter in the book about them as well.

Sophie requested the picture book about Vivaldi (I, Vivaldi?) and we listened to The Four Seasons while I read that and afterward too.

Anthony is still into nursery rhymes though today he wanted Mouse Count.

Bedtime
Bella’s bedtime request was a retelling of the story of the Minotaur. Sophie’s was a story out of the Japanese fairy tale book. Ben wanted Little Blue Truck.

We looked up cuckoo clocks and peanuts. Learned that peanuts flowers look like pea flowers. And that after they are pollinated they shoot out long stalks that bury themselves in the ground and there the nuts form. 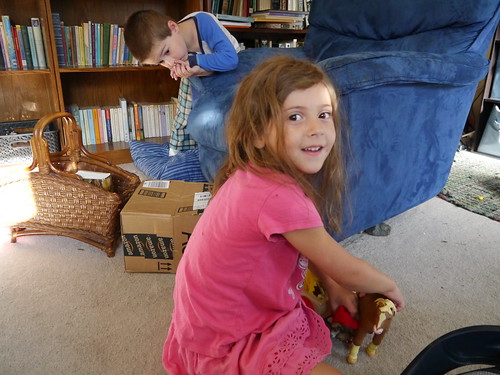 Today, Thursday, we met some friends at the Blue Hills Trailside Museum for some nature study and socializing. And some unplanned mountaineering. The kids all took off up the trail before I’d even realized what had happened. Within two minutes they were out of sight and earshot. So the best I could do was follow with Anthony and Ben (and Lucia in the Ergo). We climbed and climbed and climbed. The trail was pretty steep and rather slick since it had been raining earlier. Eventually my friend came back with Sophie, who had become alarmed at being out of sight of me. But the big kids were still far ahead so on we went. We didn’t make it quite all the way to the observation tower, but we were probably not far either when we finally caught up with them. We walked over to the ski run where the grass made a nice meadow and we could see the view back over the hills. Stunning. I wish I’d had my camera.

Then back down the hill. I couldn’t believe what a trooper Anthony was. Often we were clambering over boulders, steps that were longer than his legs. He gamely took it all in stride. Only fell a couple of times and never complained even when he skinned his knee. Ben fell a few times going down when he opted to try to keep up with the big kids instead of hanging back with me.

Then we went to the museum, run by the Audubon Society. They have a small collection of native animals. Outside there are otters, turtles, vultures, deer, owls, hawks. Inside there is a skunk, some snakes, more owls, fish. And, best of all, a beehive with glass sides so you could see the bees on the honeycomb. The kids only lasted about half an hour in the museum and then demanded a picnic lunch.

I was really proud of myself for squeezing in a math lesson before we left for our field trip (but not reading) and then we listened to a cd about Beethoven, The Story of Beethoven in Words and Music

Then we came home, the boys and Lucia all sound asleep, so I finished The Horse and His Boy, read Sophie the story of Queen Esther, and then finished our book on the terracotta warriors.

All in all not a bad day of homeschooling. I’m sure to be sore tomorrow, though.

I get my stitches out in the morning and then we have to do the weekly grocery run. Probably not going to do much school. Maybe a reading lesson in the afternoon and start The Magician’s Nephew. (I’m not sure what we’ll read when we finish Narnia.) 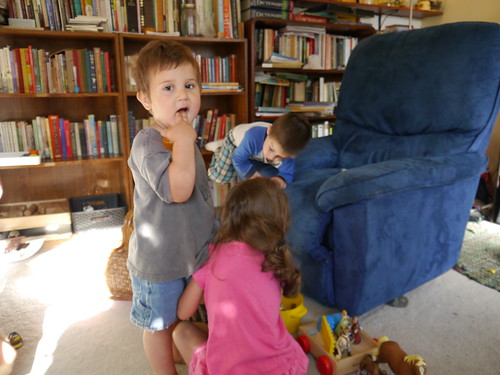