The King of Birds 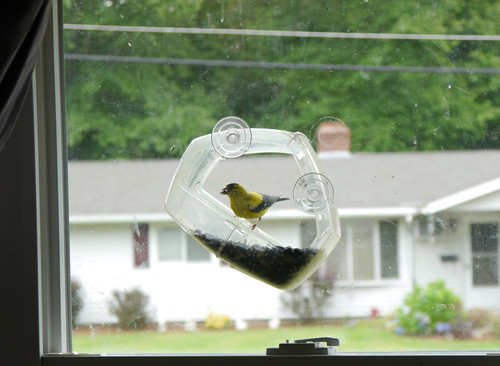 Goldfinch at the feeder

We’ve had this feeder up for quite some time (and I go for months sometimes between filling it up because I’m terrible at that kind of thing). It’s on the front window and we have a similar one at the back door. The back door feeder has in the past attracted chickadees, tufted titmice, cardinals, bluejays, wrens, as well as the usual horde of sparrows. This front one, though, has never attracted anything but sparrows. Until yesterday when this charming little goldfinch stopped by and then came back time and again, sometimes with a female. We’ve had goldfinches before but only when we put out a goldfinch feeder sock with thistle seed o our feeder pole in the back yard. This is the first time I’ve had them come to a feeder with mixed birdseed. I wonder if our new wildflower garden is attracting them, even if it isn’t blooming yet. Or maybe this mix has something he likes in it.

Anyway, Bella was charmed at our little visitor and so was Sophie. Even the boys came running to stare. It really is remarkable how bright they are. So very, very yellow.

Later Bella declared that “The goldfinch is the king of birds.” And then, “At least to me,” she amended. “Because of his golden color.”

But in my mind popped a line from a song: “The wren, the wren, the king of birds….” A song from the Chieftans’ Christmas album.

I sang the line and told her about it and promised I’d look up why the wren is the king of birds, I have some vague notions about St Stephen’s Day and Wren Boys from my Irish Studies days at Boston College, but not a clear enough picture in my head to give a summary to a seven year old. So here I am doing a wee bit of research.

The wren is also known as kuningilin “kinglet” in Old High German, a name associated with the fable of the election of the “king of birds”. The bird who could fly to the highest altitude would be made king. The eagle outflew all other birds, but he was beaten by a small bird who had hidden in his plumage. This fable is already known to Aristotle (Hist. animalium 9.11)[3] and Plinius (Naturalis hist. 10.74 ),[4] and was taken up by medieval authors such as Johann Geiler von Kaisersberg, but it concerns Regulus, and is apparently motivated by the yellow “crown” sported by these birds (a point noted already by Ludwig Uhland).[5] In modern German the name is “Zaunkönig”, king of the fence (or hedge). In Dutch the name is “winterkoninkje” (little winter king).

Here’s a telling of the story about the bird who could fly the highest from a UK site: King of the Birds in Ireland

And then I found this lovely little bit of Irish folklore with an audio recording: How the wren became King of the Birds