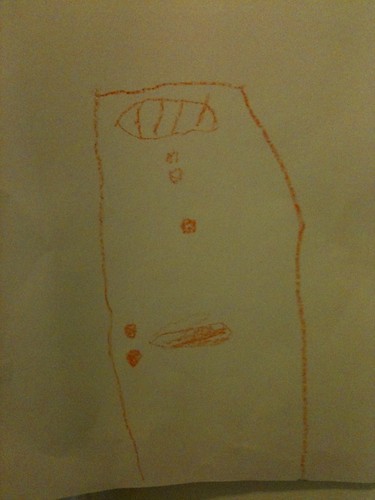 Front Door by Bella. This picture is hanging up in the hall. Bella put it there.

Bella says she wants to be an artist and a scientist. I can see her blossoming in both realms. She loves making her own art and can spend hours studying art in various picture books. She notices all sorts of details and has a wonderful degree of visual literacy. She is a very good observer of nature as well and is always asking questions and yearning to know more. She’s also been saying that she hears God’s call for her life and it is to be a religious sister. (Though in the past she’s also told be that she’s heard God telling her she is to be a mommy.) Most recently she told me that while she was at Mass with Dom on Holy Thursday she heard God speaking and he told her she will be a religious sister. When she says these things we accept them and at the same time always gently affirm that she has plenty of time to discern God’s calling for her and that often we hear different calls at different times. We always tell her that it will make us very happy whatever she ends up doing. If she is a religious sister we will be very happy, if she is a mommy we will be happy. Most of all, I say,  we want her to listen to God and to love him and to serve him in whatever she does. I love watching her ponder the possibilities with all the gravity of a five year-old. 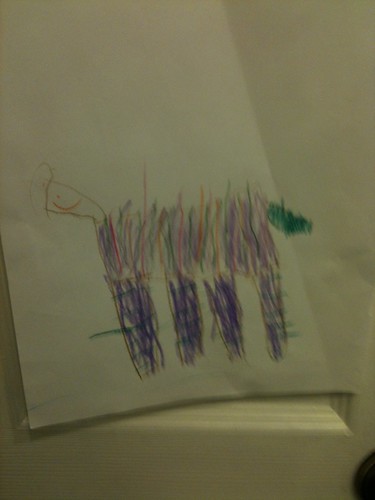 Horse by Bella—This one is hanging on our bathroom door.

Monday was beautiful, sunny and clear. The kids were all outside by nine thirty and spent most of the day going in and out. At one point I went out in the back yard and Bella told me that she heard a cardinal singing. I heard a bird but I couldn’t identify the sound as a cardinal. I’d probably have guessed robin. I’m trying to learn bird calls but I’m not all that good. So I tried to look around and see if I could spot the bird that was singing. Sure enough there was a brilliant splash of red in the very top branches of the tree next door that was just beginning to turn a hazy green. There was Bella’s cardinal. I pointed it out to her and she grinned when she spotted it. She continued to scan about and spotted a grackle and pointed to it. Later she told me that it sounded like the cardinal and the grackle were having a conversation. 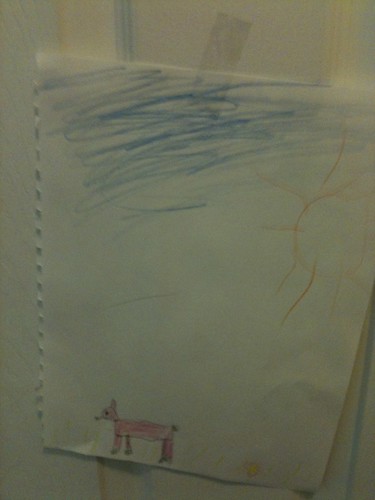 Pig by Bella. This one is hanging on Auntie Tree’s bedroom door.

On Wednesday we spotted a hawk circling above our house when we came home from the library. It called over and over again, first circling low and then soaring high. Bella said she’d never seen a bird fly so high. She also said the call sounded very much like a crow. 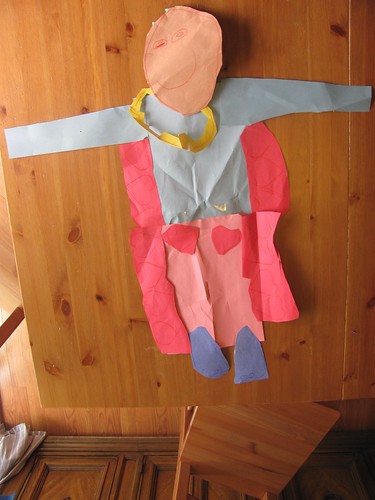 Paper Doll by Bella. She designed and executed this project all on her own. I was so impressed.

Wednesday morning I was very tired. Anthony was screaming half the night and I only got about four hours of sleep and those were interrupted by Sophie needing to be tucked in. When I got up at 6 I told Bella Sophie and Ben I was very, very tired and asked for them to pray for me so that today I would be able to be patient with everything. Bella sweetly volunteered that since I was so tired I didn’t have to read her her special books at naptime today but could instead lie down and take a nap. She said it would be a general rule that when I was tired from having a hard night I didn’t have to read to her. Her special afternoon read alouds are something she greatly treasures and looks forward to so this was an amazing act of generosity. I would normally really try to give her that time even if I am very tired so I was grateful not to feel conflicted but to retire to my room with Anthony and take an afternoon nap. 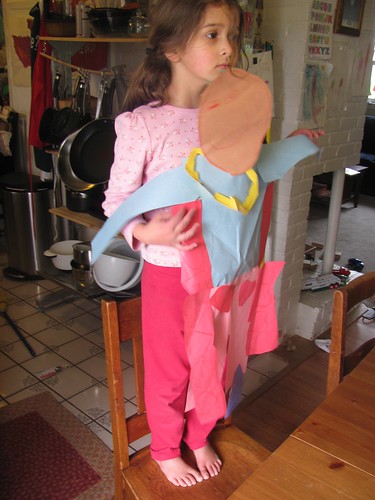 Bella with her paper doll. You can see that it’s almost life size. The red pieces down the sides are lace, Bella says. They have red hearts stenciled on them.

Also on Wednesday we went to the library. Bella went in costume. She had put her bright floral pattern dolly sling over her head as a wimple and then a bright orange scarf as a veil. She had a colorful print apron around her waist with a blue plastic rosary tucked into the band. She was a nun. It was so cute but I know no one but me would have guessed nun; but Sophie really didn’t want her to wear the outfit into the library. I’m not sure why. 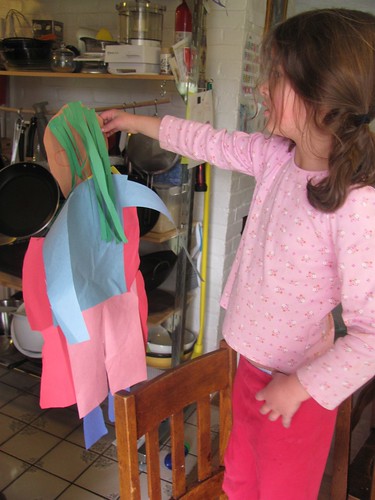 Paper Doll back side so that you can see the green hair.

Bella’s art has really taken a huge leap forward of late. She really does try so hard to observe carefully and then to reproduce what she observes. Her picture of our front door includes the knob and the deadbolt, the peephole, the mail slot, the bolts that hold on the knocker. When she made her giant paper doll she got out her shoes and put them on the table to look at as she drew the tiny bows for the doll’s shoes. She has an eye for detail and also a courage to go ahead and draw even when she does know that the results fall short of her vision. 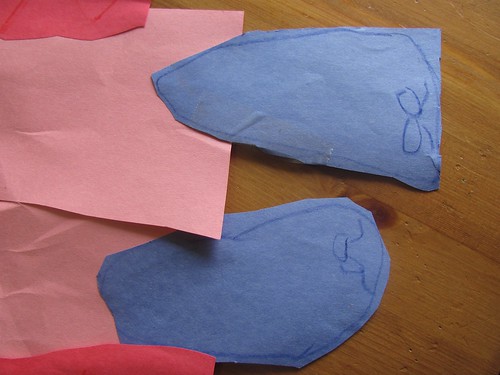 Bella has also decided to be a missionary and to evangelize our neighborhood. Yesterday she made paper rosaries and she wanted to hand them out to people. Then she wanted me to write out the words to the Hail Mary so she could hand that out as well so people could learn about Mary. But she didn’t go so far as to knock on any doors. I think she was just going to wait until someone came by and no one ever did. 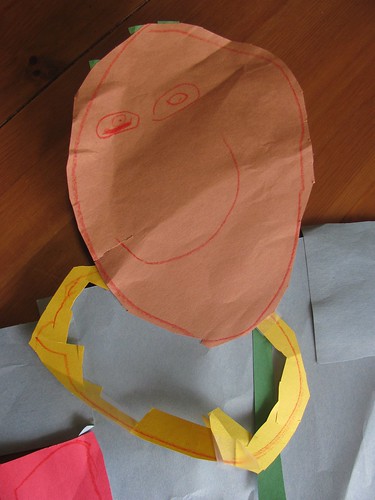 I had this post all formatted and then tried to post it and then it somehow reverted to a previous version and I had to go back and add in all the pictures and captions and by the time I was done with that I was too tired to reformat as well. And I think I lost some of my text as well; but again, too tired. So just go read some better quick takes from Jen over at Conversion Diary. Hers are very nicely formatted. With scorpions. 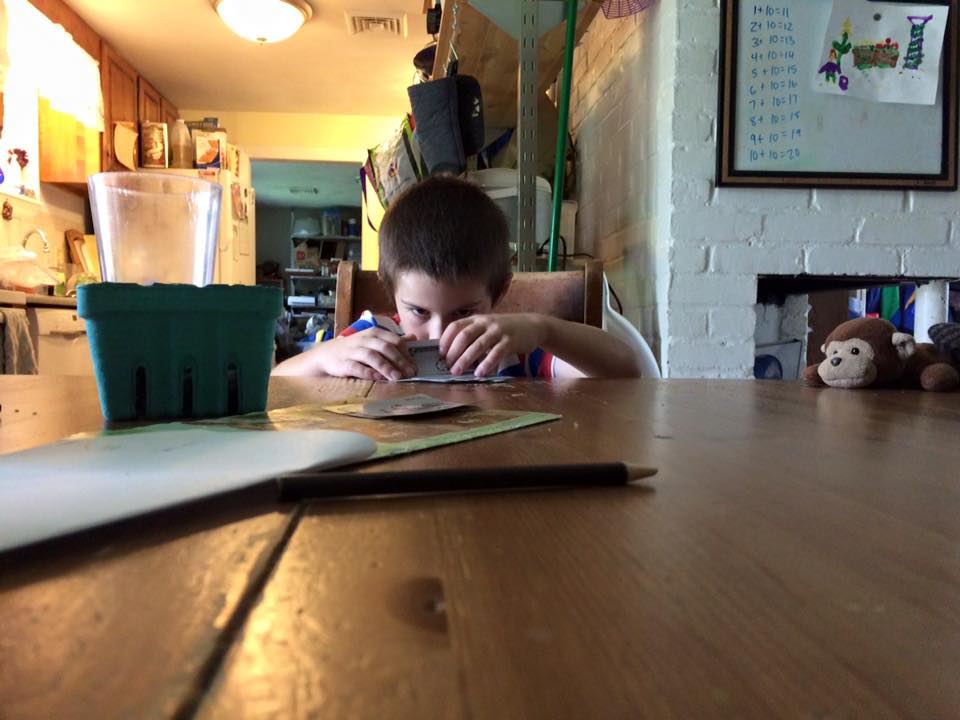