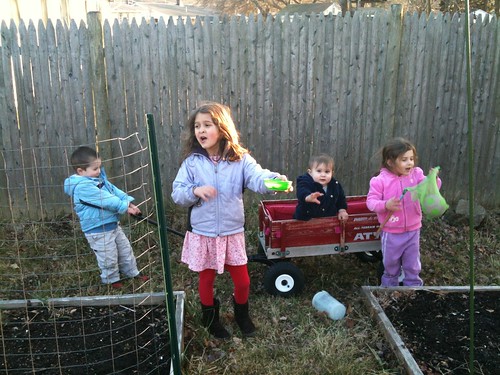 While cleaning out the office recently Dom found a couple of twenty-year-old issues of Exotic Cars magazine. They immediately became Ben’s special property and he loves pouring over the pictures of all the race cars. Tonight he requested Exotic Cars as his bedtime reading. So I started to flip through and point to all the cars. But Oh no that wasn’t what he wanted at all, “Read it!” And so I had to read the entirety of the In This Issue summary as well as a good chunk of one article before he was satisfied and ran off to listen to the book that Dom was reading to Sophie (Caps for Sale). It was very funny to read the framing narrative about Operation Desert Storm that introduced American Cars as the theme of this issue. And very funny to be declaiming sentences that included phrases such as: “4.0 liter, double overhead camshaft V-8 rated at 250 bhp at 6000 rpm.”

Another cute moment was when at dinner he pointed to one of the race cars in the magazine and declared that it was a “Madagascar.” 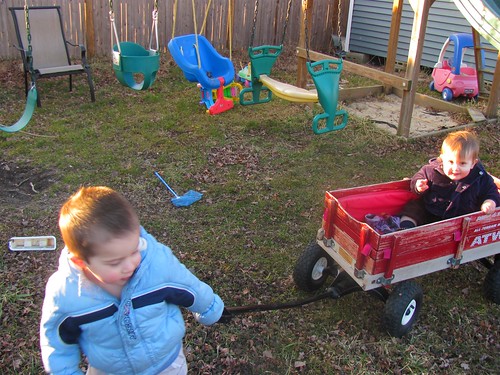 Anthony is walking more than crawling these days. So much so that I think it is fair to call him a toddler. In the past week he’s developed a new habit of sticking out his tongue, which is just adorable cute. He has finally decided that he likes eating solid foods and that most things on my plate are fair game. Though he does have a bit of a texture issue and will not eat chicken as a finger food but will eat it if is is mashed up with vegetables in a soup or sauce. He adores soup and I’ve started keeping aside some soup leftovers just for him. He even ate some of my disappointingly mild chicken vindaloo recently. The other night he ate beets off my plate. 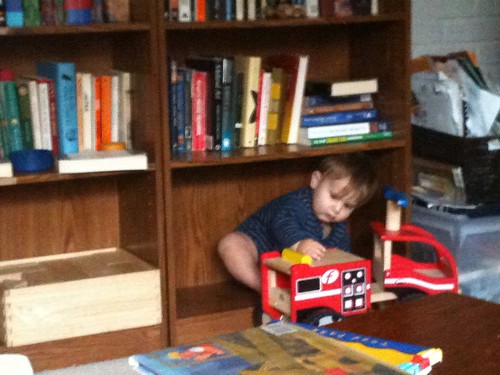 The other day Sophie was very upset and Anthony climbed down off my lap (he’d been nursing) and found Sophie’s favorite blankie and brought it to her, recalling a similar moment when Ben did the same when he was about the same age. Anthony loves hugging Ben and Sophie and Bella and Dom and myself. He is certainly the most cuddly of all my children and it is so sweet how he buries his head on your shoulder when you pick him up. 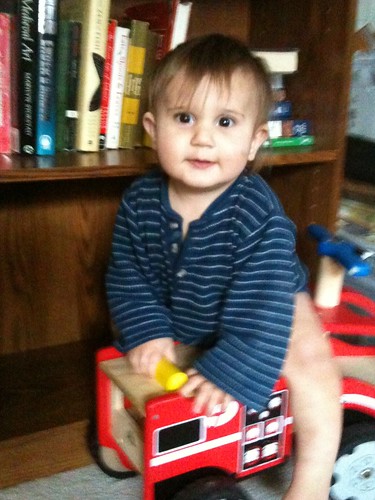 The other day Anthony was trying to hug Ben, who had just got up from a nap and was therefore cranky. He accidentally bowled poor Ben over and Ben began to throw the biggest tantrum. We could not entice him out of it until finally I realized that Ben was angry because of the injustice. When Ben knocks Anthony over we always make him apologize. So I told Ben that Anthony was sorry and that it was an accident and then I told Anthony that he needed to go give Ben a hug to let Ben know he was sorry. Amiable Anthony toddled over and gave Ben a hug and Ben hugged him back and then was immediately all smiles and chatter. 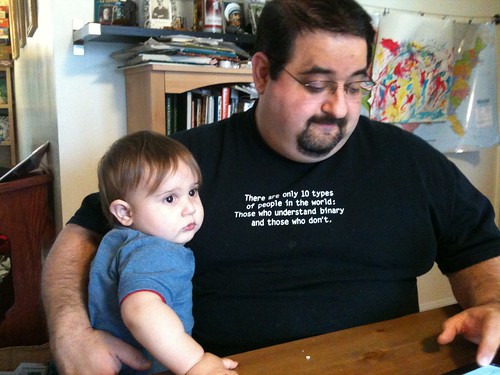 I love the way Sophie “reads” picture books. It is so very different from Bella. Bella always used to make us read them again and again until she had the memorized practically word for word. Sophie prefers to look at the pictures and make up her own stories that often have very little to do with the actual story in the book. 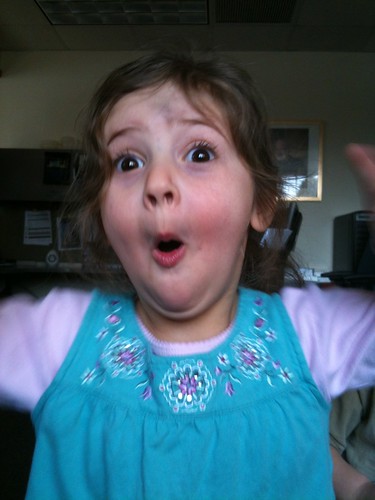 Sometimes at dinner time Bella will finish first or will move to sit next to Dom, then Sophie is left sitting by herself on that side of the table. Immediately she begins to fuss: “I’m lonely!” Even if there are still five other people at the table, if none of them is immediately next to her she is distressed. Sophie has always had Bella. And probably she doesn’t remember a time before Ben either. 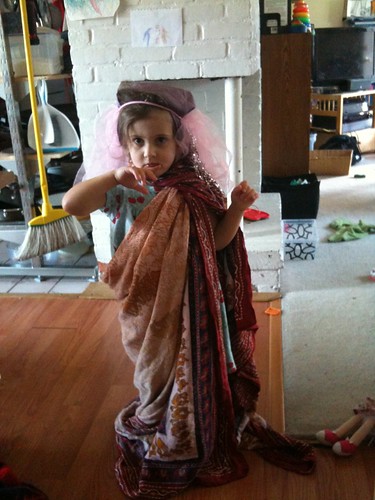 Ben is really starting to join in with Sophie and Bella’s imaginative play. He was doing dress up today; he told me he was being a silly railroad conductor and playing with wearing his hat backwards. He often grabs the animals and figures and plays with them along with his cars and trucks. “I be the baby and you be the mama,” I heard him say. 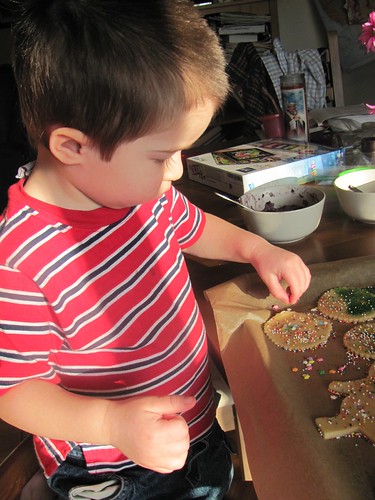 Today Ben wanted to go to the playground. Even though it was 30 degrees out, I decided he really needed time outside to run around. Plus I’d bribed him to go to bed last night by promising a trip to the playground. This morning he announced that he wanted to go to “the other playground” because there are “too many kids” at the one we usually go to. So we went to the playground near the lake where we were almost guaranteed that there would be no other kids. Especially on a day like today. I wonder if it’s because he’s realized Bella is more likely to play with him if there are no other kids or just because he hates feeling crowded and trampled. 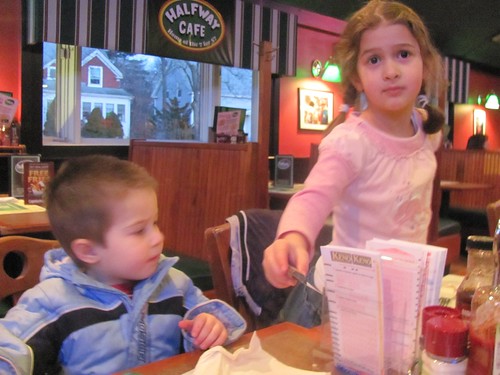 Bella decided that for Lent she was going to give up playing with the cars and trucks. I thought it was a bit odd, but she seems to be taking it very seriously. Today she was bemoaning the fact that neither Ben nor Sophie wanted to play with her. When it became clear that they didn’t like the game she wanted them to play, I suggested she play along with what they wer playing. She didn’t like the game Sophie was playing for some reason and she lamented that Ben was playing with the cars and trucks and she had given them up for Jesus. 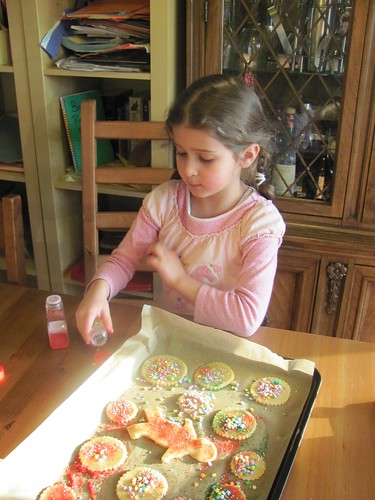 Today Anthony was playing peek-a-boo with me, holding a board book up in front of his face and then moving it away and giggling. 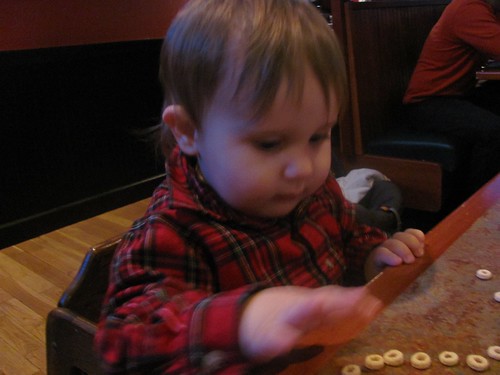 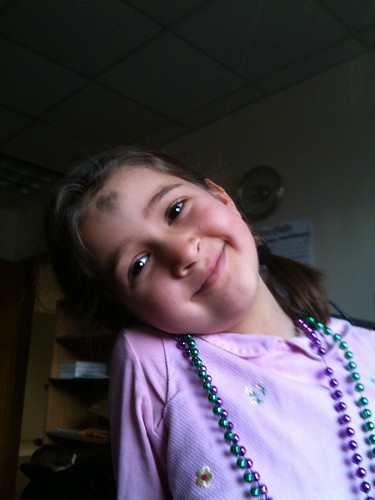 Bella constructed this groom paper doll all on her own. I was very impressed at the immediately recognizable tuxedo she created. 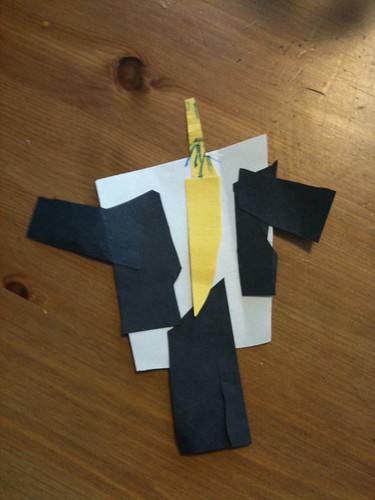