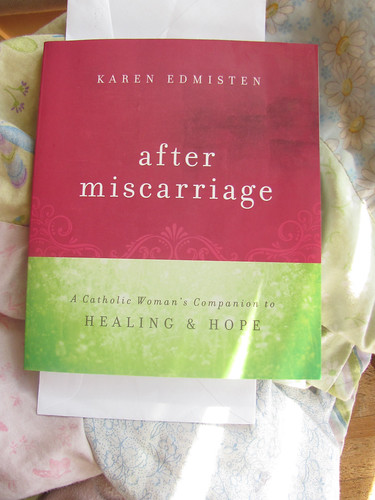 Karen Edmisten’s new book is shipping early! I got my copy yesterday on Tuesday (but then on Wednesday Anthony spiked a fever and I’ve been holding him almost non-stop while battling his ear infection ever since and so I was unable to finish this post.)  I am honored that Karen chose to include a short poem I wrote. Although I didn’t write it directly about my own miscarriage, that experience obviously informs the piece. I wrote it when I was asked to pray for a mother who had recently lost a child to SIDS. But at the time I felt funny about publishing it. It seemed too raw as a response to a stranger’s grief. Then I remembered it almost a year later when a dear friend had a miscarriage. I went back and re-read it and found that it was good. And true. So I published it. I have been told by many women that my little poem has brought them comfort. Now, nestled inside Karen’s gem of a book, I have hopes that it will reach many more than it could tucked away here in my blog’s archives.

But oh I was going to write about Karen’s book. Did I mention what a treasure it is? I thought I was done grieving our baby Francis but as I’ve perused these pages I have found my tears flowing again. In just three weeks the anniversary is coming—five years since that terrible day. And yet that date, February 25, lies just between two wonderful anniversaries that have since joined our family’s calendar of celebrations: February 20, Anthony’s birthday, and March 4, Sophie’s birthday. I think God knew what he was doing when Sophie was due almost a year to the day from the day I lost Baby Francis. This is the way the world is, death and life so intertwined you can’t pull them apart. Had Francis not died, I’d not have my Sophie. It is a grief and a joy both. And now Anthony. It is a miracle when you consider that after the miscarriage I was told I had cancer and was going to have a hysterectomy. I went through such a dark week, thinking Bella would be the only baby I’d get to hold. And then there was Sophie… and Ben… and Anthony.

Life after miscarriage. Sometimes I feel like I don’t belong in that sisterhood of grieving mothers because mine has been such an easy cross when I know so many mothers who struggle so under such a heavy weight. But I do know that whenever I hear of a mother—or father, let’s not forget the fathers—who has lost a baby, I know my heart now reaches out in a way I don’t think it could have before.

And then there were these words, that Colleen penned recently after losing yet another of her babies:

But I hold in my heart the greatest of all consolations, the hope of heaven.  For I realize, that even when my body is well past the age of bearing babies, even if I should live until I am 100, always, I will be an expectant mother, until the day I hold my babies for eternity.

I love that. I will always be an expectant mother. There is still that eagerly awaited little one, the one my arms ache to hold and that hope of a longed for meeting in heaven.

I hope that After Miscarriage

finds its way into many hands, many homes, many hearts. The stories, poems, prayers and memories Karen shares are a beautiful balm for grieving parents because they are full of the healing love of Christ.