If You Can Get It by Brendan Hodge
4 comments
Share:FacebookTwitter
books

If You Can Get It by Brendan Hodge 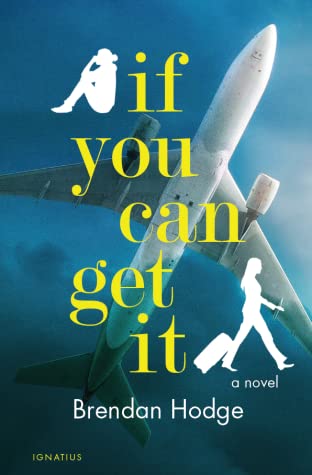 Book Review: If You Can Get It by Brendan Hodge.

The man who only lives for making money
Lives a life that isn’t necessarily sunny;
Likewise the man who works for fame
There’s no guarantee that time won’t erase his name
The fact is
The only work that really brings enjoyment
Is the kind that is for girl and boy meant
Fall in love — you won’t regret it
That’s the best work of all — if you can get it

Just imagine someone
Waiting at the cottage door
Where two hearts become one
Who could ask for anything more?
Loving one who loves you
And then taking that vow
Nice work if you can get it
And if you get it
Won’t you tell me how?

(‘Nice Work If You Can Get It’ lyrics by Ira Gershwin)

I know this song best in Ella Fitzgerald’s rendition and every time I picked up the novel, I could hear Ella’s smoky voice singing somewhere in a dark room…

What is more important, money, fame… or love? Ira Gershwin’s lyrics ask. Well, love of course. Fall in love, you won’t regret it. That’s the best work of all…. Who could ask for anything more? And yet for many young professionals on the career path, love and marriage and family have been put on the shelf or the back burner. Time enough for those things once you’ve had some success, established yourself… whatever the goal is, you’ve got to get there first and maybe then you can think about those other things….

As the novel opens Jen Nilsson is a successful young business woman living in the Bay Area, with a nice condo, a BMW, and a great job with an upward trajectory as product line manager for hi-tech company supervising the launch of a new product. She’s happy with her major role in a major tech firm and hoping for a promotion to director. She doesn’t seem to want anything more from life. Dating, love, marriage, family, even friendship, don’t seem to be priorities in her life; but she’s not at all aware that there’s anything missing.

And then her little sister Katie, ten years younger, just graduated from college, religious studies major, washes up at her doorstep, having left home in an impulsive huff after yet another argument with their mother. Jen’s professional and family worlds collide, and she’s stuck with a sister who doesn’t have a job at all, who just wants to play on the X-box all day. And then her career takes a left turn when, instead of the expected product launch, she’s laid off in a merger/acquisition.   Suddenly jobless, and then hired by a new company whose interview gauntlet seems like something out of Alice in Wonderland, Jen is immediately sent to China for an indeterminate length of time. The foreign country, the job change, the little sister: Jen’s circumstances seem to combine to prompt her to re-evaluate her life goals, to reconsider the relative importance of family and relationships, and career.

Julie Davis’s excellent review compares If You Can Get It to a Jane Austen novel, which seems an apt comparison to me. We are too often caught up in the idea of Austen as a fancy-dress costume drama; but in her day her novels dealt with ordinary people leading ordinary lives, making choices about friendships, family, and matrimony… So it’s what Austen might be writing if she lived today, a carefully observed story about real people.

The story is satisfying. The blending of career and family plotlines is somewhat awkward to describe, but works really well. I cared about the details of Jen’s business pursuits, just enough detail to make it feel real, not so much as to make me feel lost or apathetic. And I really liked the development of the relationships in this character-driven story. It’s satisfying to see how Jen and Katie both discover what it means to be sisters, reconnect with their parents, and rethink some of their assumptions about what they want in life.

Faith plays a key role in the story, but doesn’t try to take the driver seat. Growing up the family where Christmas and Easter Catholics. Katie was a religious studies major, Jen never gave much thought to faith. But at some point after they’d both moved out their parents had an awakening and started taking their faith seriously. Now the grown daughters aren’t quite sure what to make of suddenly devout parents. Katie’s religious studies hasn’t given her much more of a handle on the practical application of religious faith than Jen’s business degree. But if you’re going to be reconsidering the basis of your life’s decisions… maybe faith should play a role in that too?

I first read this novel when Brendan was writing it for NaNoWriMo and posting chapters on his Darwin Catholic blog as he wrote them. I liked the story then, but it’s been a delight to see the finished novel, which was a treat to read in its polished form.

A great read, if you can get it.

Tagged asbook review, Brendan Hodge, Darwin Catholic, If You Can Get It
Share:FacebookTwitter