By Melanie Bettinelli on January 19, 2015 in books, Education, Home schooling 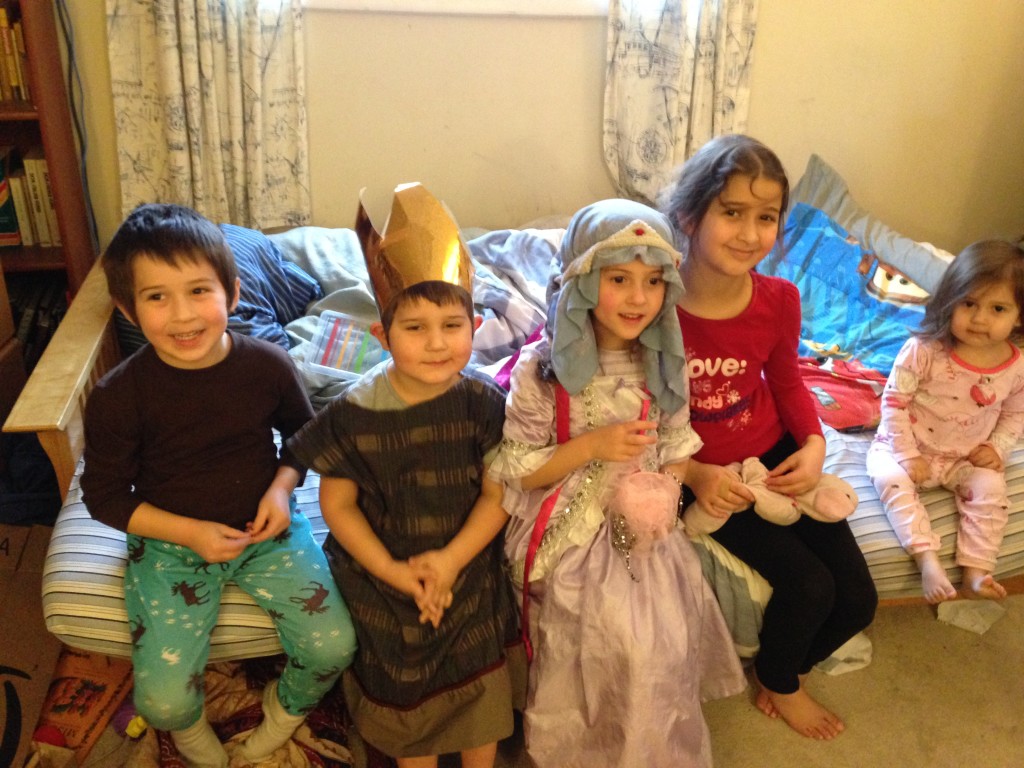 Bedtime stories, a story from a book of Indian mythology. Arjuna and Krishna and a battle.

Hard time getting started. Bella did two pages of math, me reading the questions and writing down the answers. That’s it. She never did get back to the reading and copy work. Her tummy hurt. She changed the sheets on her bed, though. She drew some pictures. She played games. Oh well. I do note that Bella is getting to the stage of reading labels, boxes, signs, bits of text on the computer over my shoulder. She’s finally noticing and decoding all the text in her daily life, finally curious. This seems a major milestone to me.

Sophie did math, copy work, read me a chapter of Oliver and Amanda Pig. She’s getting pretty smooth with the reading.

We read a pile of books: The Mitchells, The Illustrated Book of Knights, Little House in Brookfield, Brambly Hedge, Faith and Life Catechism (with long conversation about the 10 commandments), SOTW chapter about France, Versailles, and the Sun King. Also a couple of picture books.

We watched a Donald Duck cartoon and then some of The Merry Wives of Windsor. Lucy wanted none of the cartoon, during it she kept howling for Merry Wives. I have no idea why. 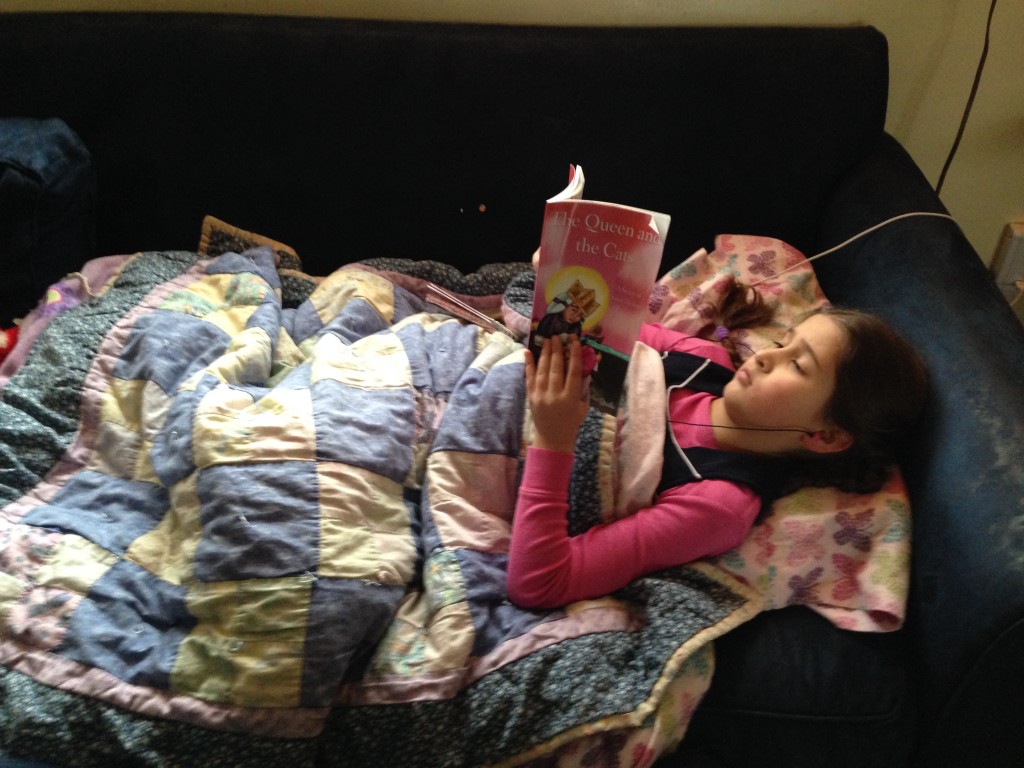 Listening to one book, reading another

Bella did a reluctant page of math with me transcribing. She copied out a sentence from her picture Bible. She didn’t read to me.

Sophie did a page of math and a half page of copy work.

We went to the grocery store and that took up most of the morning.

Afternoon stories: The Mitchells, Little House in Brookfield, and some picture books of Indian myths and fables, including one on the Taj Mahal. 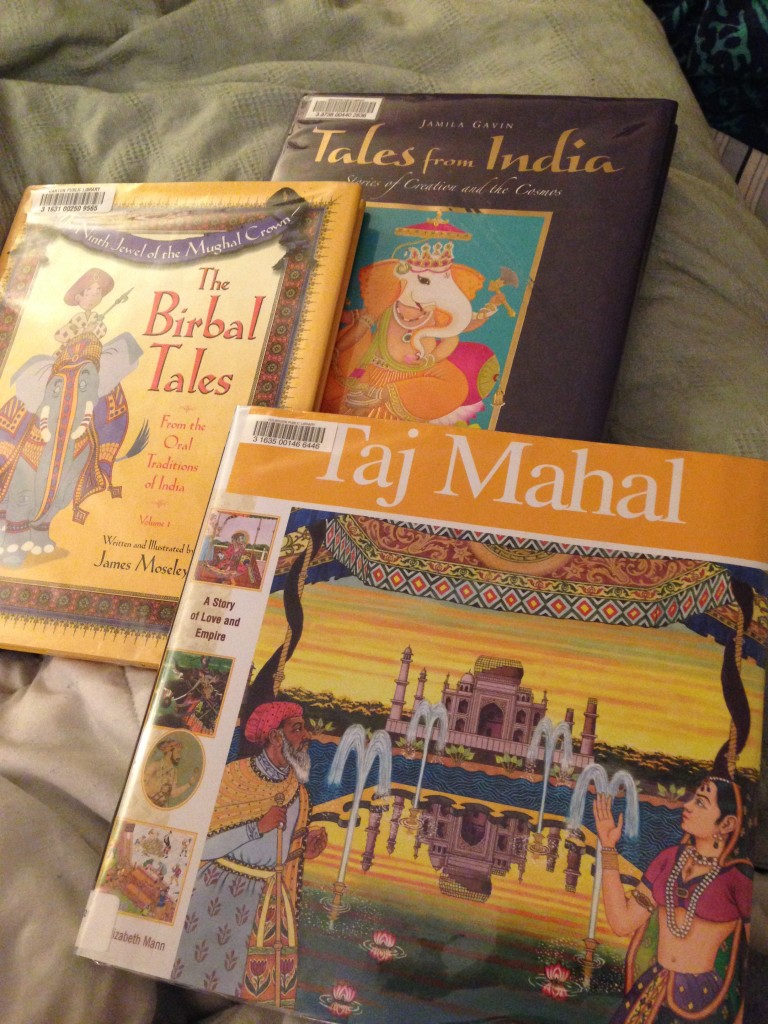 This week’s adventure India and the Mughal Empire.

Much, much smoother start, much more on task today! Bella did a page of math on her own with just a little help to decipher the instructions and a pointer when she got stuck. She decided to jump to the Memoria Press Copybook III because she wanted to copy from the facing page and not to copy from the line above. So she got that out and copied the first line of the first page.

Sophie did a page of math with no help from me. She copied out the rest of her page and drew a picture of Adam and Eve in the garden with a tree and a bird.

I read Morning Prayer sitting at the table while the girls copied and Ben and Lucy sat on my lap and play with each other. It was bait chaotic, but Lucy prayed along with me a little bit and Sophie asked what “Paraclete” means and so I had a chance for a nice little exposition of how the Holy Spirit acts as advocate for us, begging mercy from the Just Judge. And I talked about how Jesus goes even further and offers to take our punishment on himself, to pay the price we owe for our sins. I acted it out with a drama about Sophie stealing Ben’s cow and the Holy Spirit as her lawyer and Jesus stepping in to pay the debt. They laughed and marveled at God’s wonderful mercy. It was a really good little catechism lesson.

And then Bella or Sophie, I forget which, asked me what the first words of the Bible are. So I recited them in English and then recalled the Latin, but thought to ask my sister what they are in Hebrew. So then she gave us a sweet little lesson: “So the first word is barasheet, the beginning, in the beginning. Followed by bara, he created. In the beginning, he began, at the creation, he created. The next word tells us who he is. Elohim, God. But the first two words are a deliberate pairing, the noun and verb coming from the same root word. Beginning/began. It starts with the noun. This type of word play continues through the first two chapters.”

Next we decamped to the office for reading. Sophie read me a library book, The Little Brown Jay, a folktale from India, a sweet little Just-so story. Bella read me Roxaboxen— the whole thing! With some coaching and I know she knows the story well. But still, great perseverance through a long and tricky text.

Then following up on a promise to Sophie yesterday who was mad when I didn’t get to her book selection, I read them several of the Birbal tales, more folk tales from India. I really like this collection. Birbal is a sort of Solomon figure, a wise judge, but also something of a trickster.

Then I let them watch more of The Merry Wives of Windsor, picking up where they stopped the other day. But first Anthony and Sophie dressed up as king and queen and Bella decided they were King James I of England and his wife, Queen Anne, and Ben was Prince Charles. (Bella was the maid.) So they watched in costume. Ha! 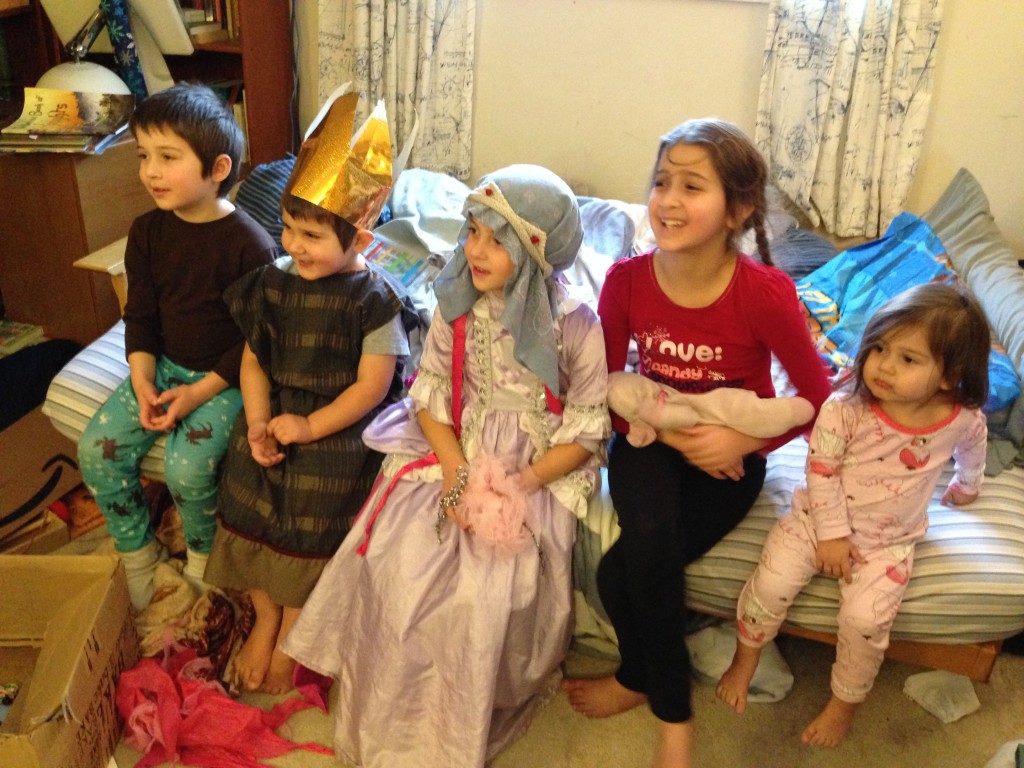 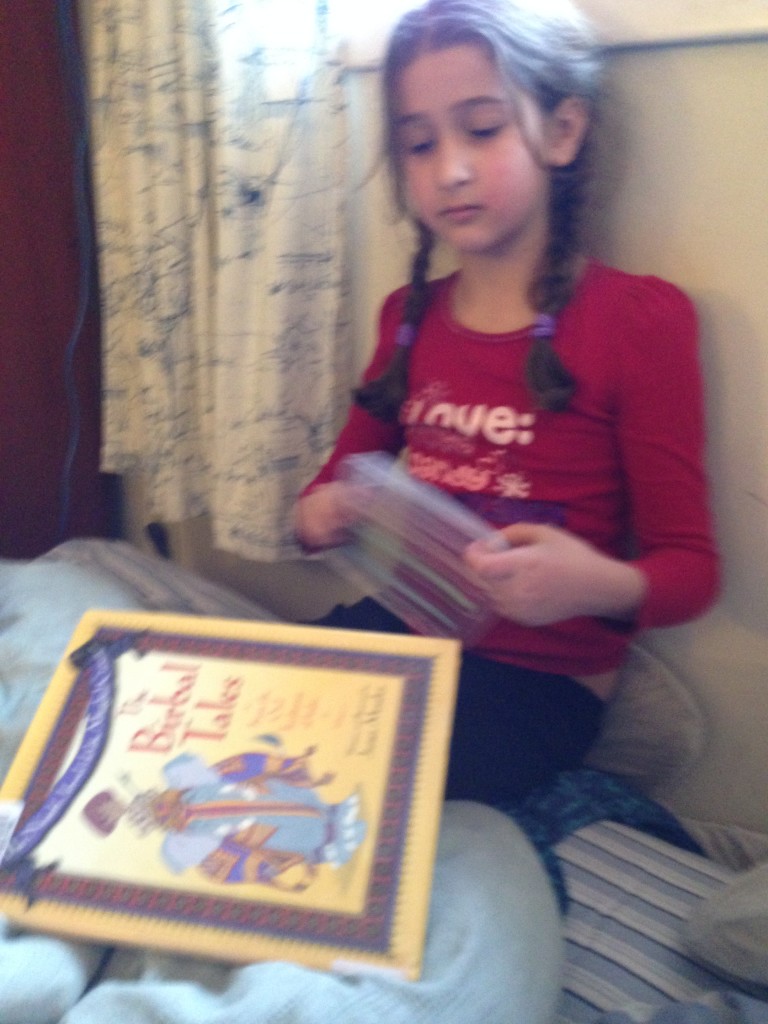 Our new favorite: The Birbal Tales

Bella did two pages of math, one of addition and subtraction and one of multiplication. She did a line of copy work, and didn’t read to me. Sophie was having a very hard day all day, lots of tears and frustration and drama. But eventually she did a very messy page of copy work, full of scribbles and spiral designs. I have no idea what was up with that. She did some math too: two pages, once I steered her away from a page about clocks and on to measuring lengths and widths. Sophie read me two pages of The Little Juggler. Tough prose, I was impressed.

Afternoon stories: The Mitchells, something about Ganesha from the Stories of India book, a Birbal story, a picture book for Anthony. Lots of interruptions, no one wanted to do a very long story time. Lucy’s early nap didn’t help.

While I prepped dinner, Bella decided to write a letter to some friends. I wrote out the sentences she dictated to me and then she copied them out. The letter included a funny story she made up about some owls on her pencil— they all got patterned pencils in their stockings and one of Bella’s had an owl design. In Bella’s story the pencil becomes a gun and the owls live inside the gun and operate it. One of the owls is designated the operator of the gun. He falls asleep on the trigger and accidentally shoots one of the other owls out of the gun. Bella’s telling is much less coherent since she never explains the pencil, gun, or owls. But it includes snappy dialogue and starts in media res. She’s really a natural story teller. 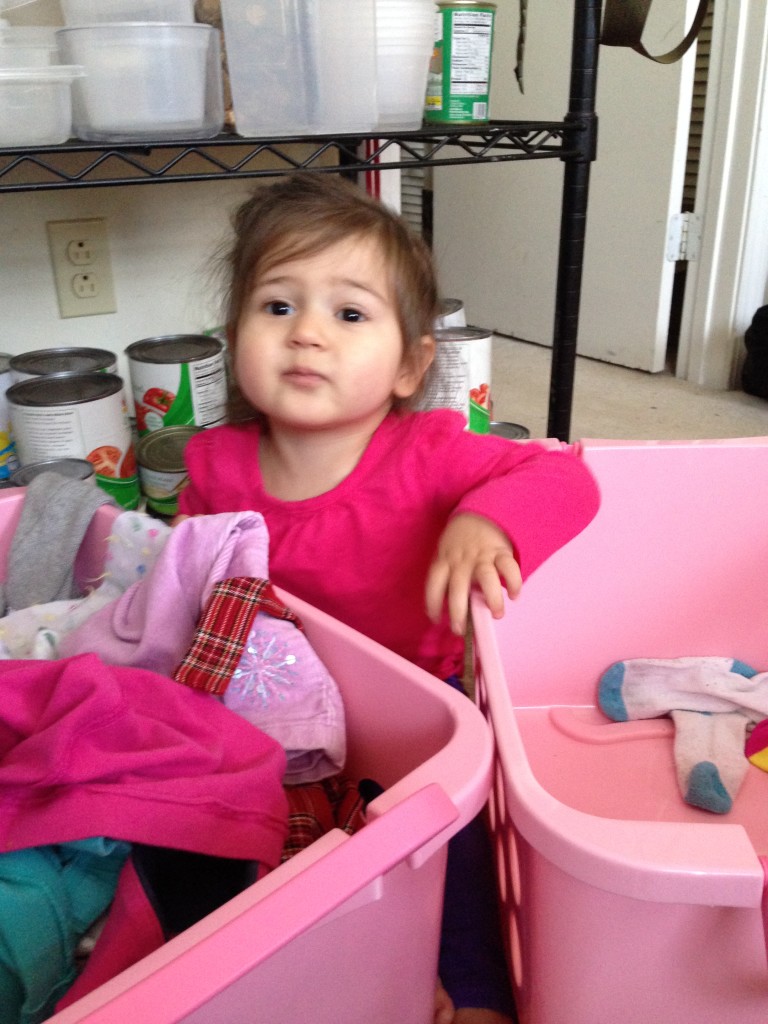 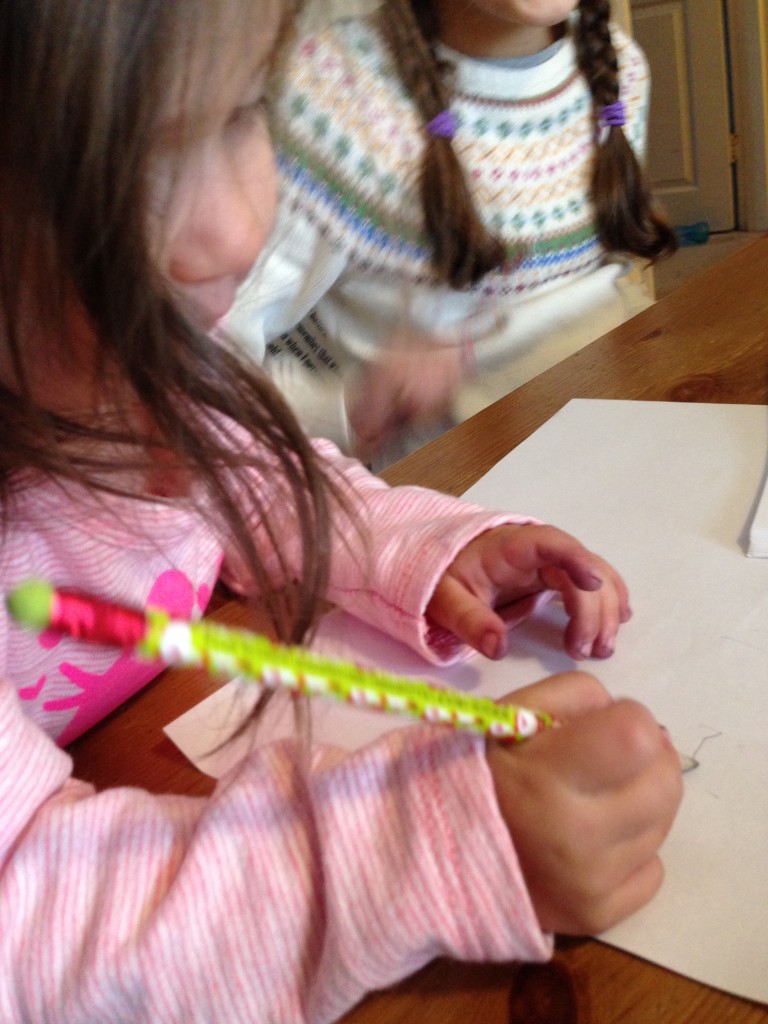 We had a playdate scheduled today and that’s a perfect excuse to get the house cleaned. Bella and Sophie did their copy work and math. Bella helped Sophie with her math while I helped Ben vacuum the boys’ room— he so wanted to learn how to vacuum. Bella read me Little Blue Truck while I tidied up the kitchen. All the kids pitched in wonderfully on the cleaning.

Bella and Anthony both were really good at hospitality. Well, Anthony did hit one of our guests, but at lunch he made it up to her by bringing her apple slices. Anthony and Bella both went out of their way to talk to my friend. It’s always nice to see them able to converse with adults. Ben wasn’t super social, but neither did he freak out at having other kids in his space playing with his things. A couple of times of being a little miffed, but no over-reactions.

Afternoon stories: more Birbal stories, they’ve become a fast favorite. Then we finished the book about the Taj Mahal. Good context about the Mughal dynasty. Interesting to see how the two books deal with overlapping characters. Our foray into India has been fun. I’m learning quite a bit. I confess, I knew almost nothing about the Mughals. Another reason homeschooling is so appealing, I love learning new things alongside my kids. 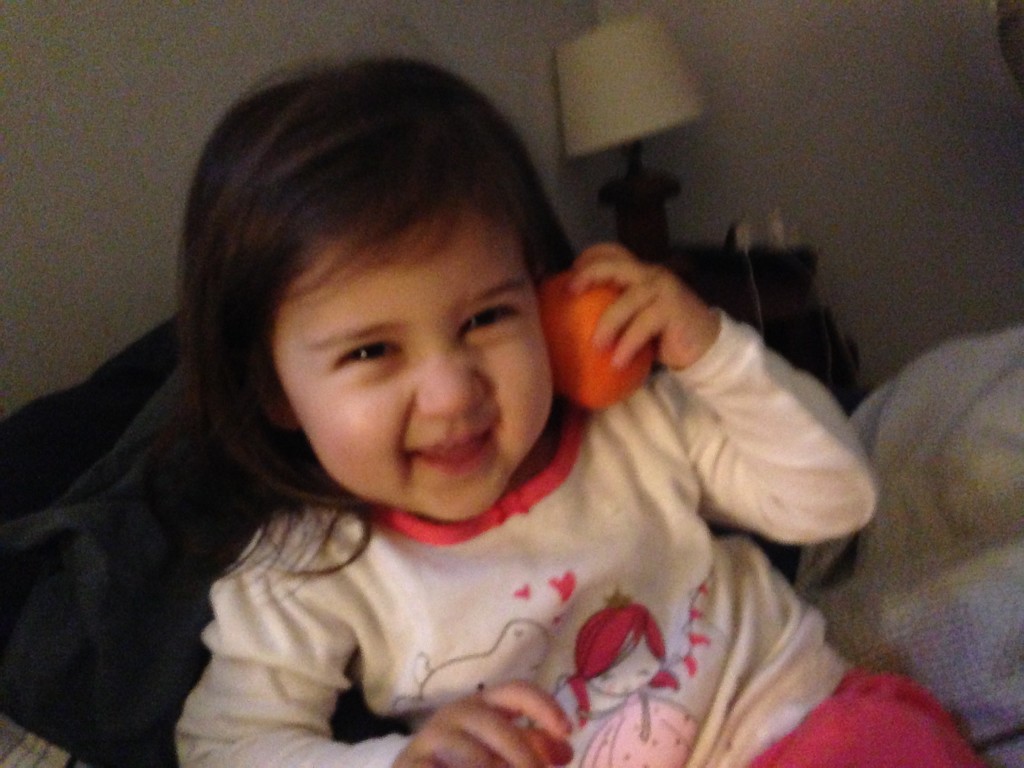 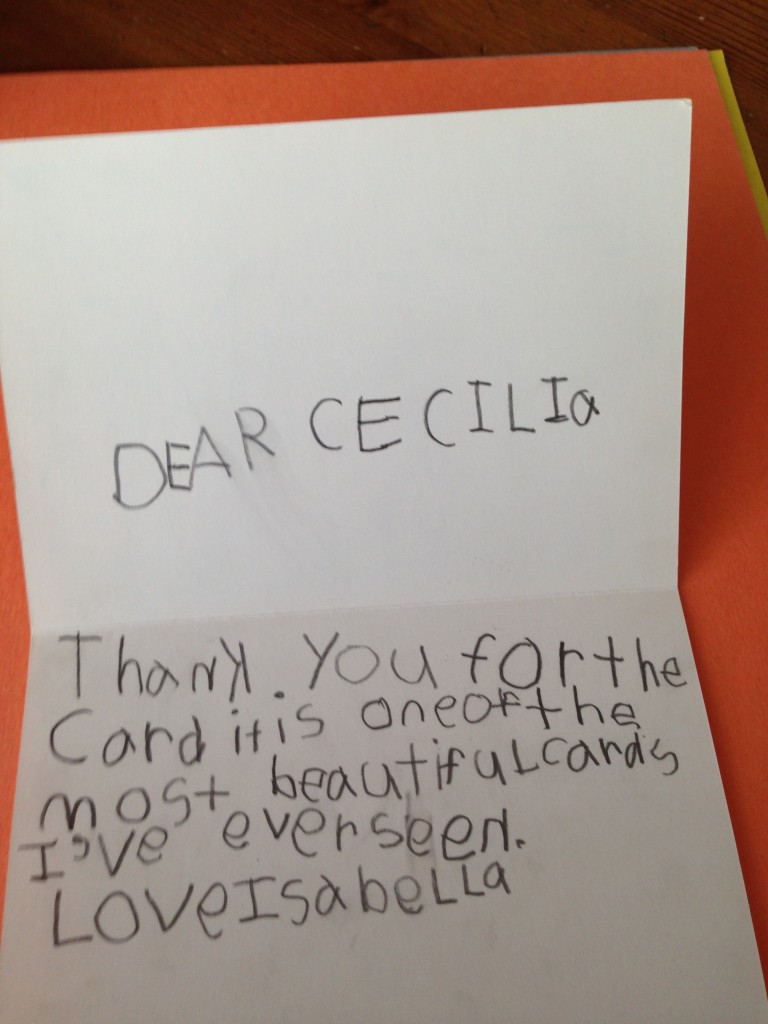 Bella writes a letter to her pen pal

I really want to get on the ball with Ben and work on the habit of math and reading lessons. I’ve been letting those slide and he’s been letting me. I guess we need to have a little chat.

I think I should be doing more Bible story reading with Ben and Sophie, more Bible reading with Bella. More science reading. Some phonics or spelling. Then I question myself: are these things we really need to do or things I see other people doing and think I need to do too?
I think Bella would like to do some physical science stuff, basic chemistry and physics. Also some stuff about how the human body works. I should plan some lessons.

Recently I feel like I’m coasting. Doing just enough school to assuage my guilt. Or I could say that we’re recovering from a long Christmas break, working our way up to higher gear but not quite there yet. We’ll see how this week goes. One thing is sure: if I want to get on top of school, I need to get on top of my own schedule and getting to bed at a reasonable hour. 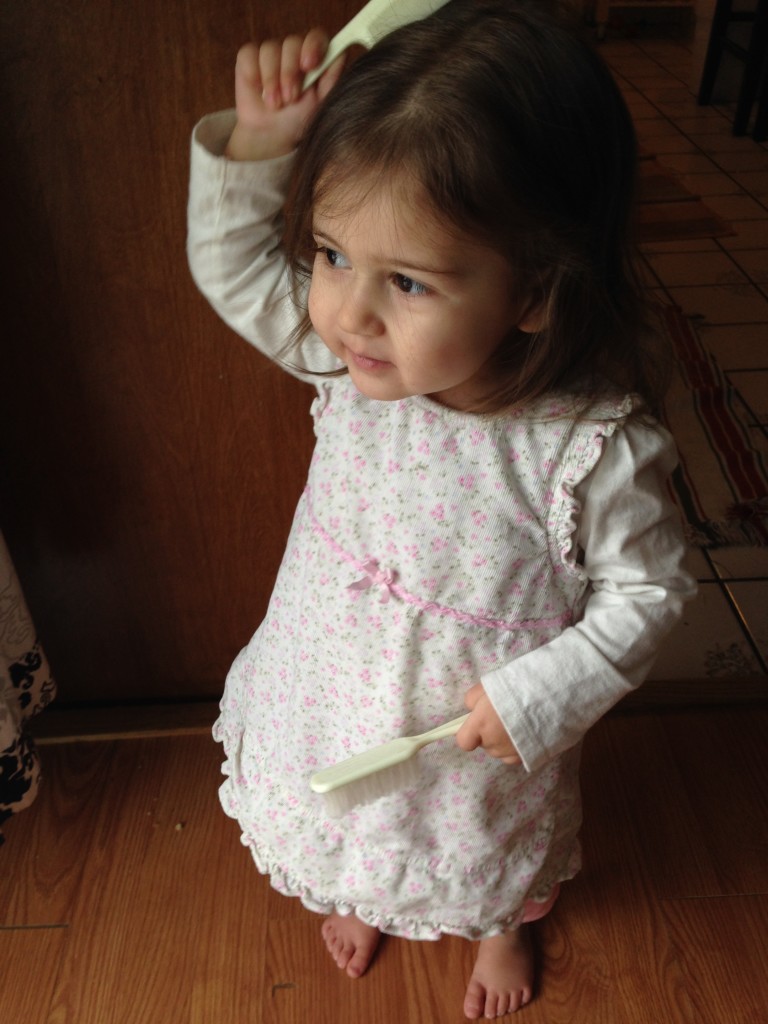 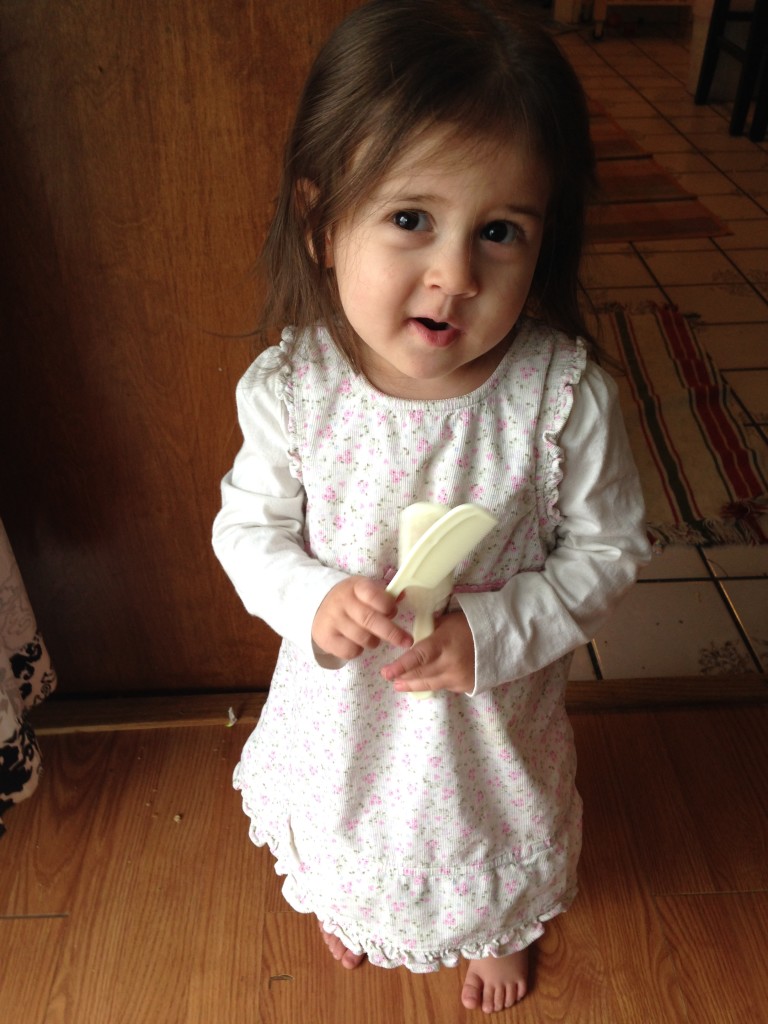 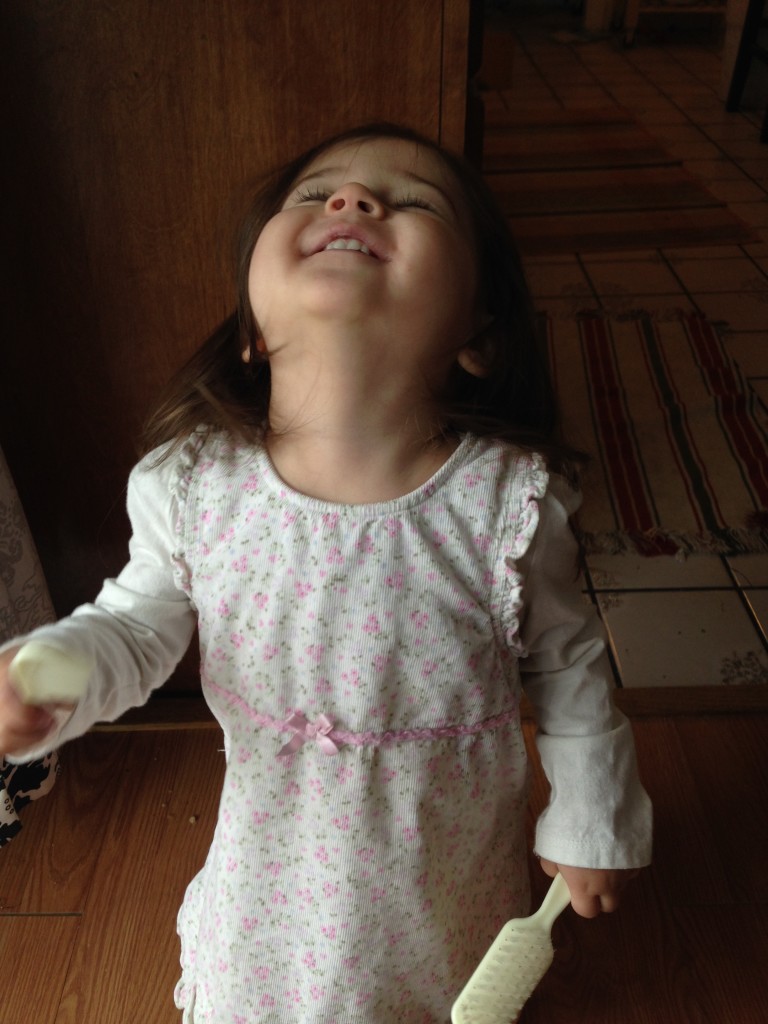 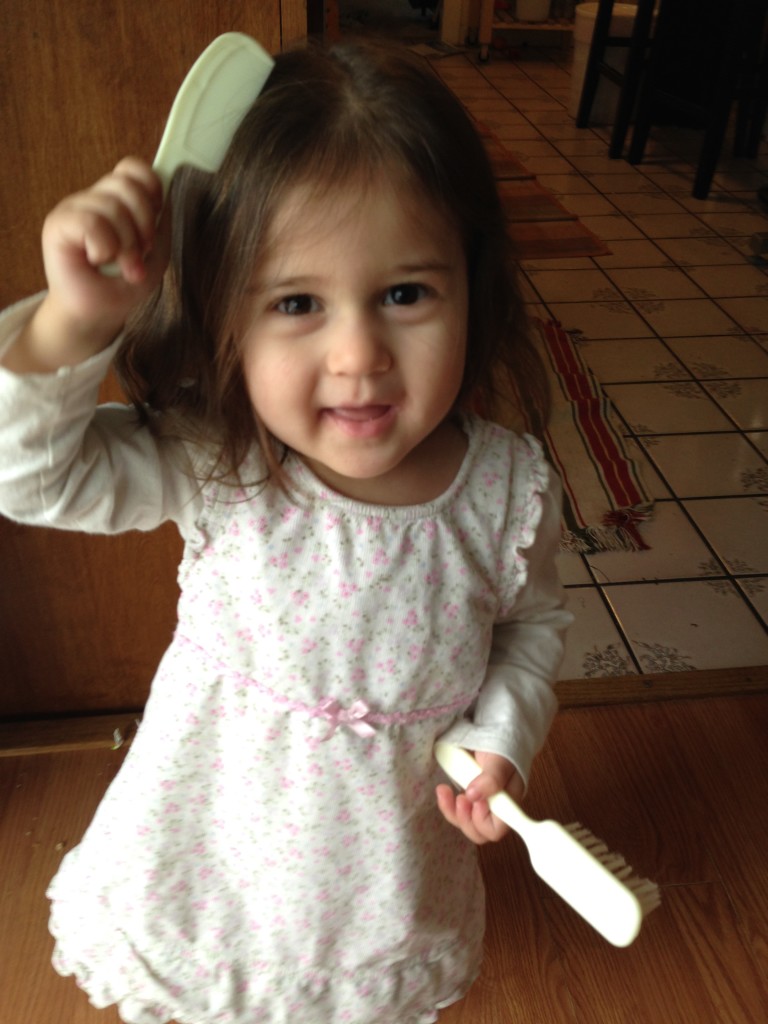