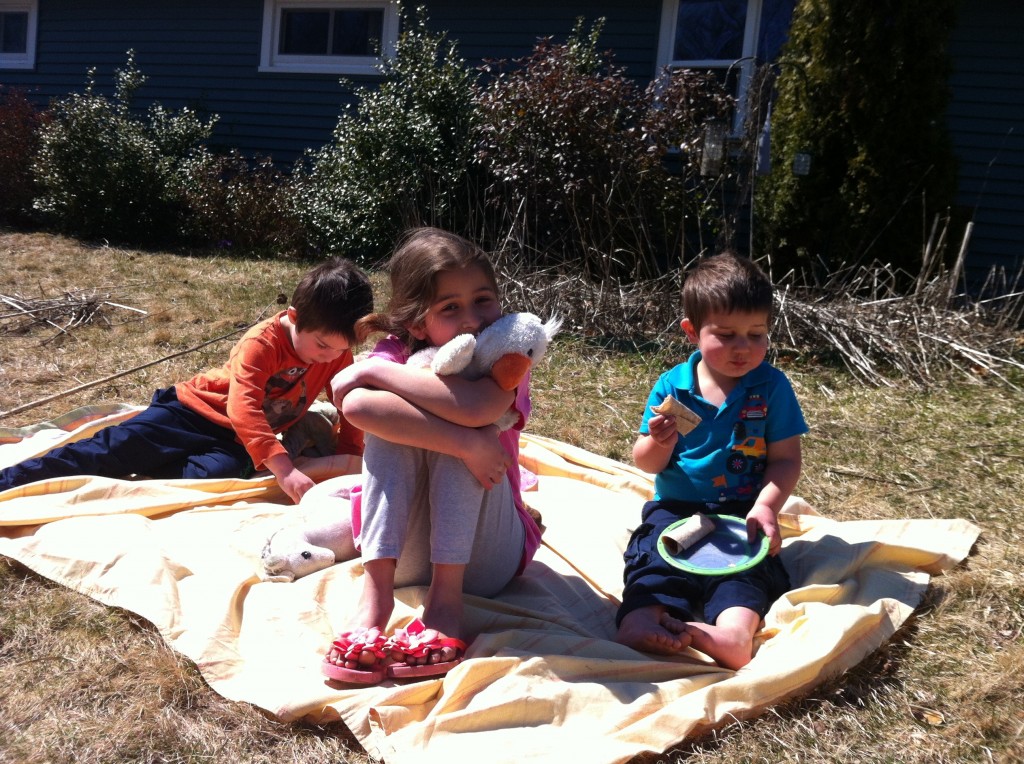 [Another day in the life post. I’m on a roll this week!]

Today was grocery day. I haven’t yet figured out how to do school work and the grocery shopping on the same day. My sister-in-law does her shopping at night and lets her husband put the kids to bed. I loathe the thought of going out at night, but I suppose at some point I might have to consider something like that. I also loathe the thought of doing the shopping on the weekend– the crowds! But as the kids get older I don’t see how I can keep taking two hours out of the school week. And I know some people swear by Peapod, but for me it’s always been a bust. And I just can’t see putting the weekly shopping into Dom’s hands. Too much of my method is forgetting to put stuff on the list but remembering it when I see it on the shelf. Anyway, the long and the short of it is I’m terrible at juggling things and grocery shopping knocks me flat. 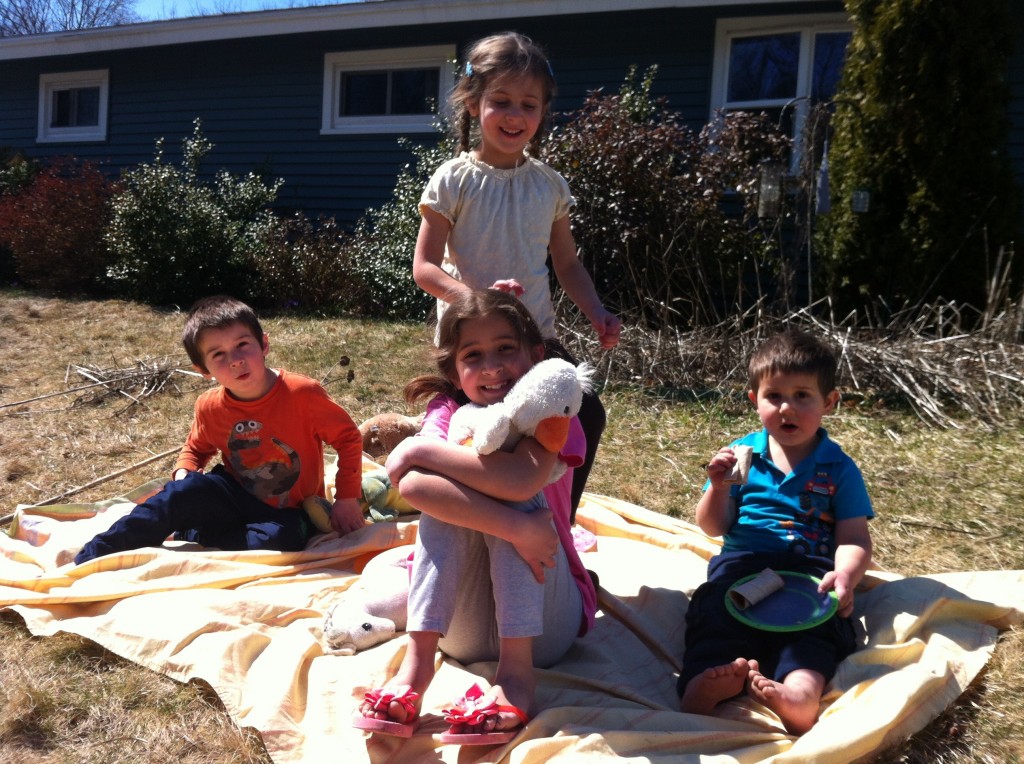 I suppose I could have had the girls do copywork over breakfast, but I forgot to prepare something for Bella last night and we got a really late start this morning. Lucia woke at 1 and then again at 5:30 and so when I got back to sleep I slept until almost 8. Evidently Dom slept late too for when I got up none of the kids had been fed breakfast and so I had to do it all while Dom showered.

Breakfast takes about an hour to prepare and eat. Maybe in an ideal world it wouldn’t, but I am so not a morning person. It takes me forever to wake up. I made a pot of oatmeal and cinnamon apples for Dom and me– Ben and Bella had some too. Ben and Anthony had their usual cinnamon toast. Bella made herself a peanut butter and jelly tortilla. I made Sophie a fried egg and toast. I know this would be easier if everyone ate the same thing, but we’ve got ourselves into a pattern and first thing in the morning I am not really ready to go about retraining the kids out of the breakfast on demand habit. I made myself a cup of tea and found it in the microwave when I got home. Breakfast making took so long that the tea was cold when the oatmeal was done.

Getting the kids dressed and ready to head out the door takes another hour. I wish it didn’t, but somehow it always does. Bella and Sophie and Ben can pretty much dress themselves, but often need a score of reminders and some help finding clean clothes. I have to help dress Anthony– and usually defuse a tantrum because of some article of clothing– and of course Lucia is helpless and loves to play Run Away from Mama. Then I have to do the girls’ hair, help Anthony and Lucy with shoes. Often Ben needs help with his shoes and socks too. I have to round up the bags and the water cups and technically the kids can help with a lot of that, but somehow it still seems to take an hour no matter what I do.

So to the grocery store, out of the door by 10:15 and home in time for lunch, about 12:15. While I was unloading the groceries Bella noticed honeybees buzzing among the crocuses. The first honeybees of spring made us feel like dancing. “Now the crocuses can get pollinated!” Bella exclaimed. 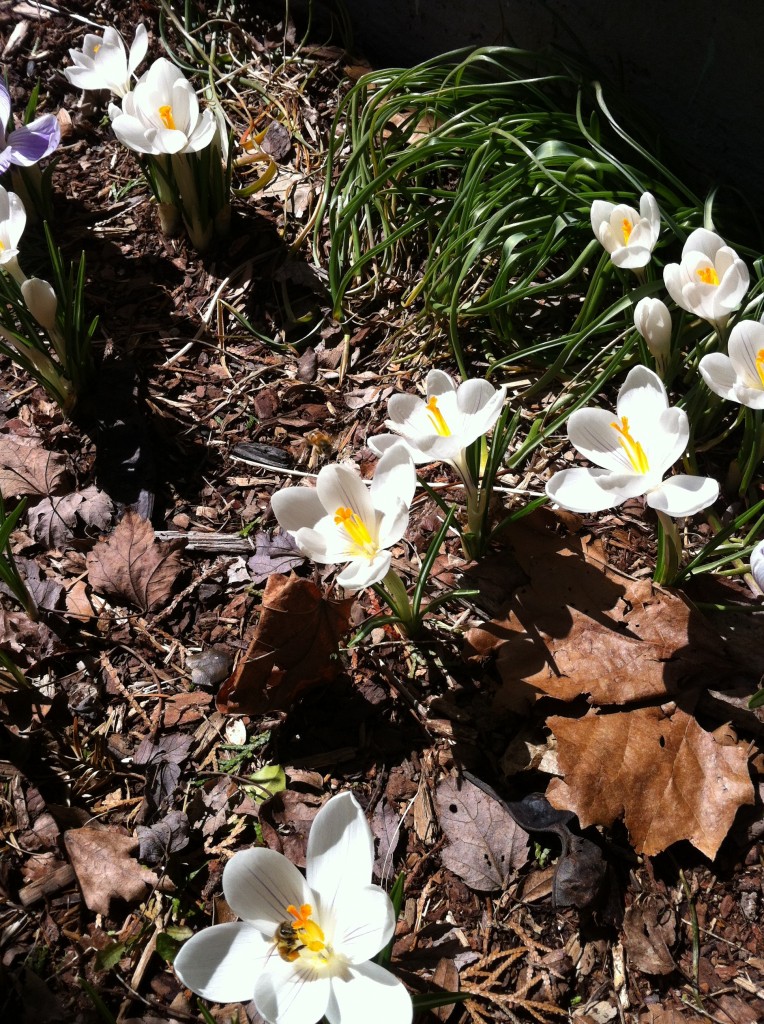 Bella found a sheet and laid it out on the front lawn and they had a picnic lunch. While they were sitting there the street sweeper came by to clean up the winter’s accumulation of sand and debris. Now the street feels so tidy. It really is spring! We started pulling some of the dead stalks from our front flower garden, but it’s a big task. Mostly the tallest stalks are pulled and were made into playthings: brooms, swords, spears, whatnot.

Hard to get anything read during story time with everyone wanting to be out in the warm and sun. Bella sat still for a history chapter: Henry V, Agincourt, Joan of Arc. Somehow I hadn’t realized that the whole Joan of Arc thing connected with Henry V, Katherine’s son the baby Henry VI who was supposed to be king of both England and France, being the reason the Dauphin hadn’t been crowned king. Now it all makes sense. Two different stories that had no connection in my head are now suddenly one big epic. I love it when that happens. Then we read about St Kentigern in the Island Saints book and that was all we did. Little girls need to be outside on sunny days.

I did print a bunch of coloring pages out of the Story of the World Activity book at Bella’s request. She’d remembered it had St Joan paper dolls and once we opened it she found many more pictures she wanted: a shield, a heraldic lion, a word search, and other items. Sophie, Ben and Anthony colored in pictures of Robin Hood and Sophie tried to do the word search but it was too hard. I had to find all the words for her.

Ben and Anthony and Lucia are all obsessed with digging in my garden bed and I cannot seem to put a stop to it no matter how many times I go out to pull them away. They’re always right back in the dirt.

But over dinner (quiche) Bella was remembering the story we’d read recently about Robert the Bruce, but we were both muddled on the details. So I had to go and find it and read the chapter again. 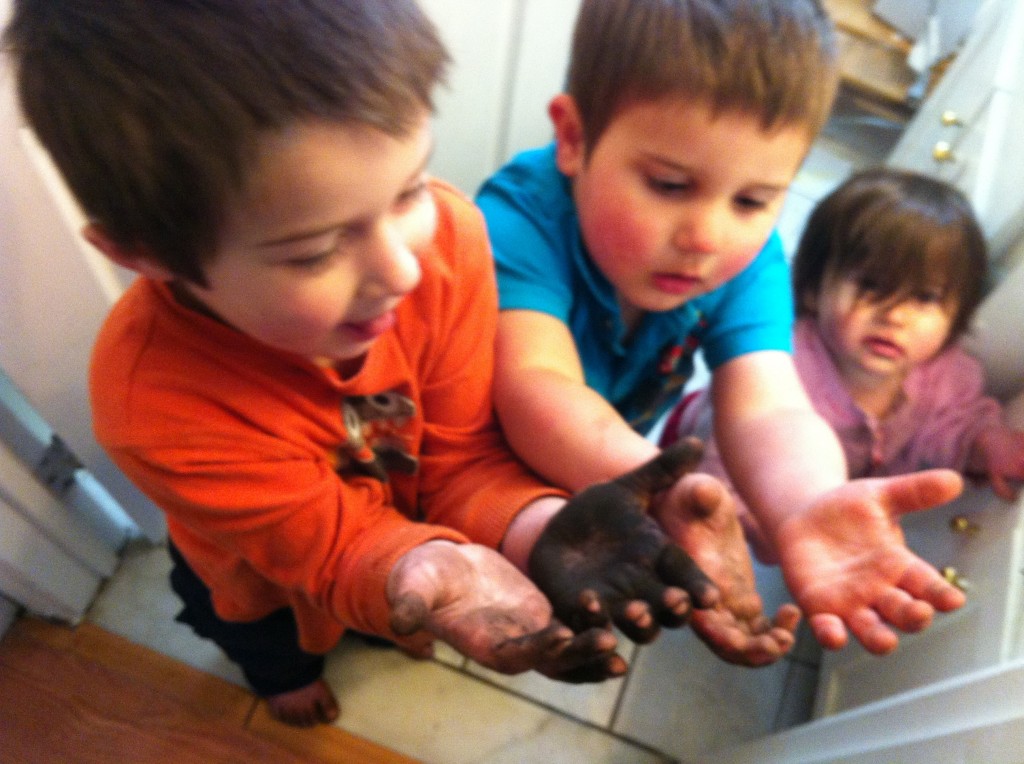 Dinner was late, really late. And by the time it was finished all the kids were overtired. Poor Ben just lost it and couldn’t deal and had to be put to bed. I’ve really got to get on top of it gain.