Daily Life with Mud and Crocuses and Swords 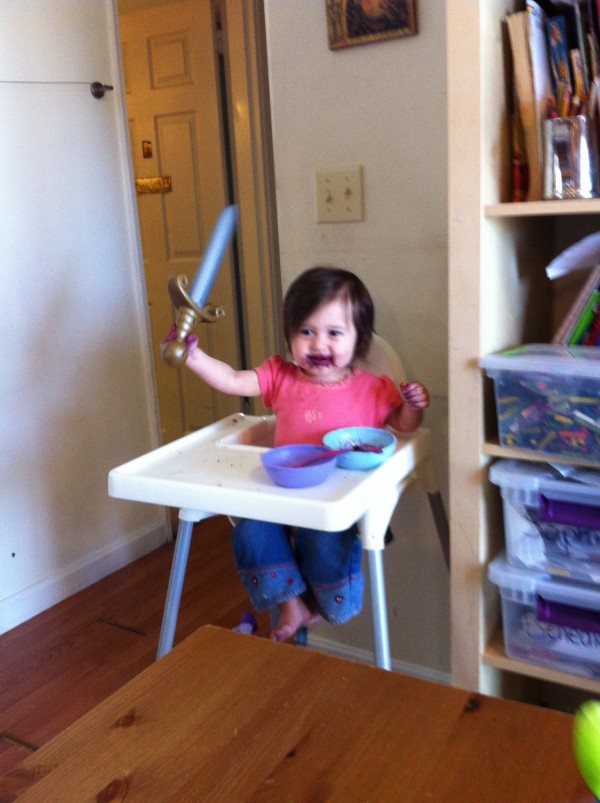 Another daily life post. I guess I’m on a roll. Maybe it’s just that I’m feeling kind of glum about how chaotic things are and writing down what we accomplish makes me feel less out of control. Plus I got a lot of great pictures today that I really want to share.

I got off to a slow start this morning after a rough night with Lucia. But having the girls’ copywork prepared last nigh meant that they could actually start at breakfast time. It took a bit of prompting and several reminders to help them disengage from the game they were playing. But both did sit down to do the work while I nursed Lucy. Sophie also brought me her Bob book to read and after doing her copywork Bella decided she wanted to write and illustrate a page in the story she’s writing about the Fairy of the Animals. So I helped her spell a bunch of words and she came up with two solid sentences.

Then we did math lessons, Saxon for Sophie and Life of Fred for Bella. And after that I released them to run around outside. The sun was out and they would not be contained.

. They were much harder to dig up than I’d expected. Those corms were buried deep, which is totally counter to Miss Comstock’s wisdom that they need to be reburied every couple of years.

While I was digging them up, Lucia escaped and made a beeline into the street. Fortunately we live on a very quiet circle and the big kids spied her at once and yelled for me to come get her. Oy! She kept making a break for it and I finally had to put her back into the house and shut the door, turning a deaf ear to her wails. Poor baby.

Sophie, Bella, and I pulled apart three crocuses and had some good discussions about them. Bella loves botany and Sophie is naturally curious. Then I sketched one of them in my notebook. Neither of the girls were interested in copying me. They ran out to the back to play. Enough indoors time! Back to the mud! 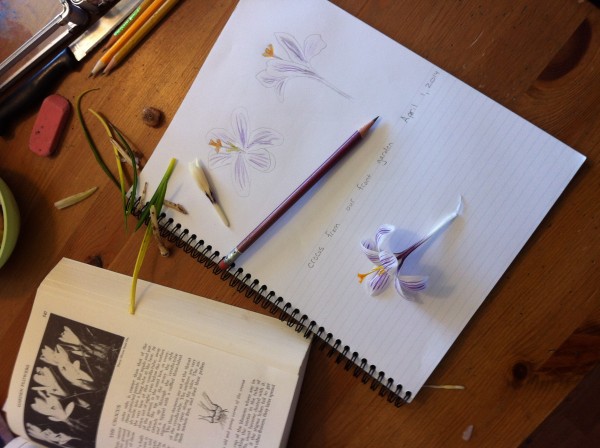 Lucia got into the action and ran out with them and discovered some mud somehow. She had it all up her arms, on her feet and hands, and plastered in her hair, a nice thick swathe of it. I think everyone got at least a bit muddy. The backyard was really swampy after a very snowy winter and lots and lots of rain this past week, but that didn’t stop any of them.

Lucy made a beeline to the stairs up to the playhouse. And conquered them on her first try. Oh me oh my! I am so not ready for that. Once at the top she dashed back and forth, sticking her head out between the slats and laughing the maniacal pirate laugh that Dom taught her: AHH-ha-ha-ha-ha. It was so very adorable and so very terrifying at the same time. She’s so tiny! And reckless of danger. I was trying to get lunch made and put Anthony’s shoes on but kept having to go out and rescue her. The big kids– Bella, Ben, and Sophie– tried to help, but they really wanted to play not babysit their little sister. Anthony just resorted to his standard yelling at her. 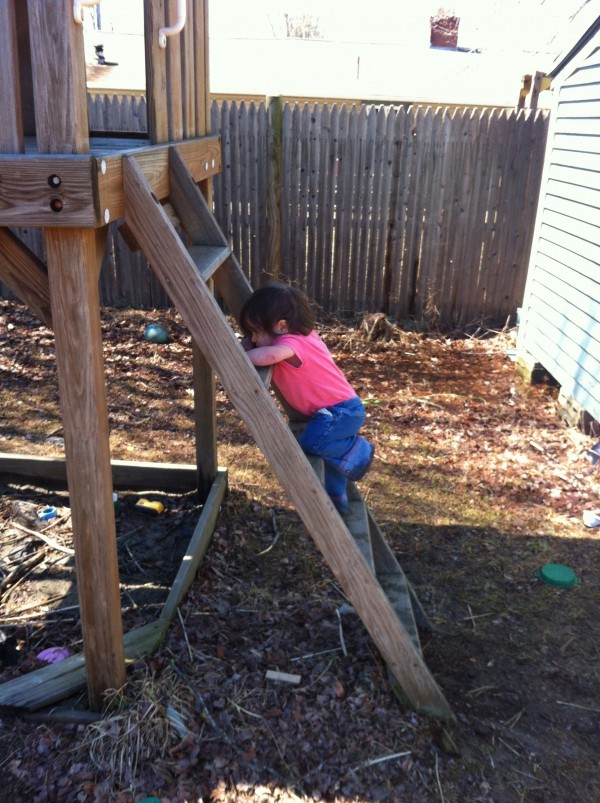 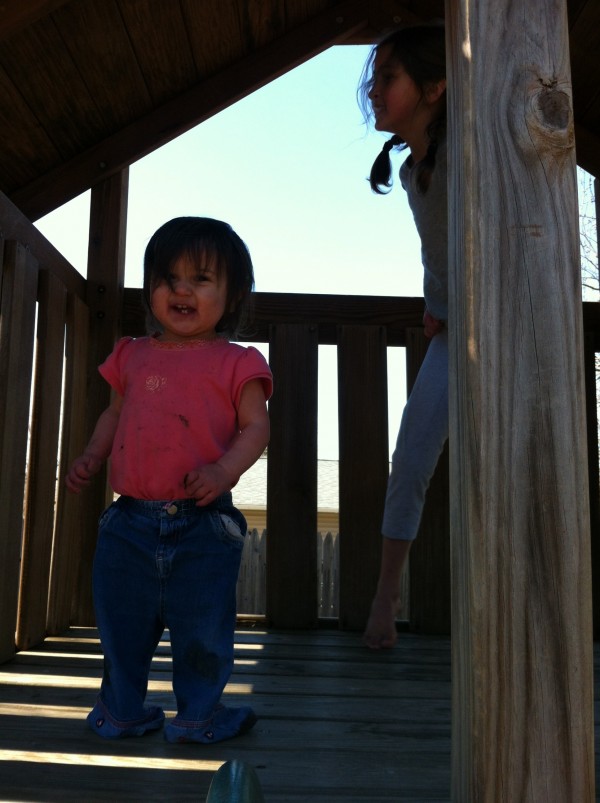 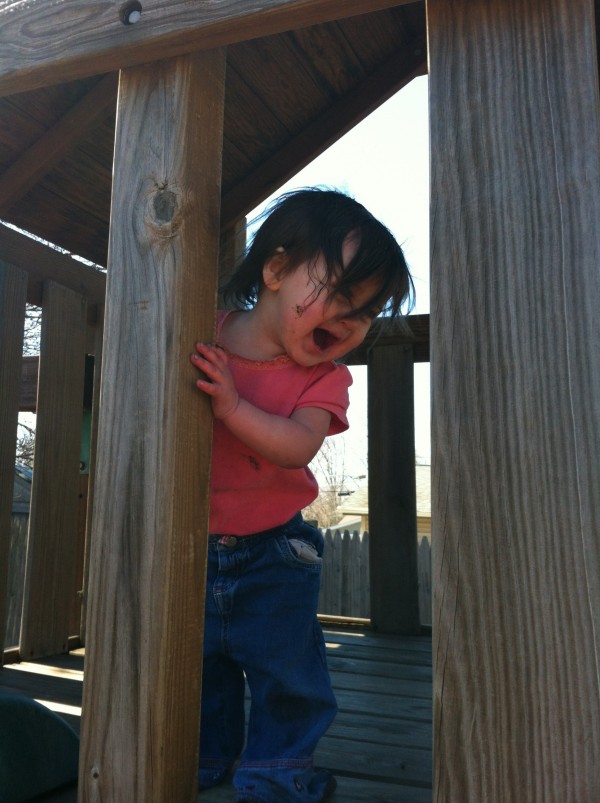 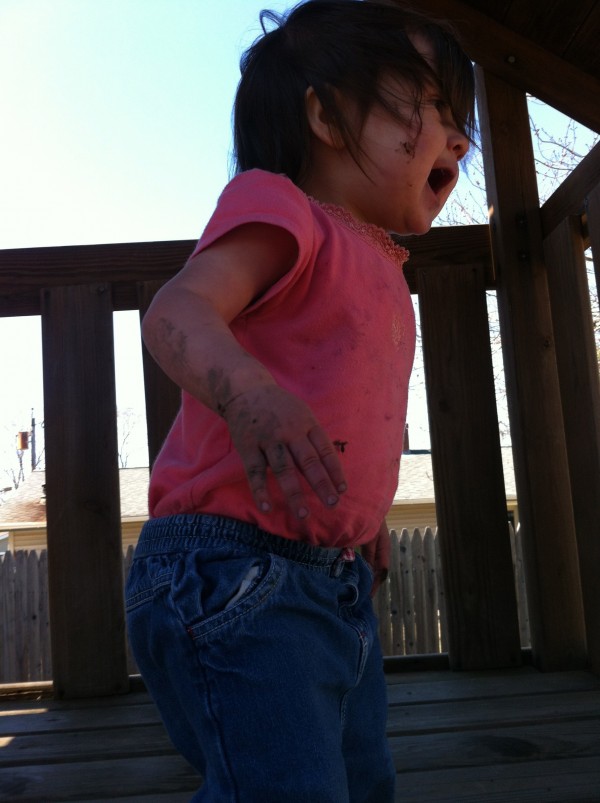 I think everyone took their lunches outside. Poor Lucy didn’t want any lunch at all. I think she may be teething. She’s been picking at her food but acting hungry. And those gums where the upper canines will be look a bit swollen.

I finally put a chair on the bottom of the ladder to keep her from getting up to the playhouse and she threw a royal toddler tantrum– she’s getting quite good at those. Wandering about the yard sobbing dramatically. Throwing herself to her knees beside the table and occasionally making sure I was paying attention. I was. I was snapping pictures of her. Mean mommy!

Eventually I brought her in and cleaned her hands and feet off and let her wander about the house while I ate my own lunch of pb&j on sourdough and a hodgepodge of leftover vegetable odds and ends. Then I nursed her down for a nap, reading a chapter of my book about St Andre Bessette and checking my email and Facebook conversations.

Then I had story time with the big kids. Anthony wanted to read a book about apples: How Do Apples Grow?

It seemed very apropos to our morning’s botany lesson. I wondered if he was inspired to seek it out because we’d been looking at the flower or if it was just a happy accident. I read the chapter about the passion in A Life of Our Lord for Children

for Ben and Sophie. I was dozing during the final book so everyone drifted away back outside. And somehow it was then time to make dinner: pasta with red sauce and sausages; green beans and canned peaches. 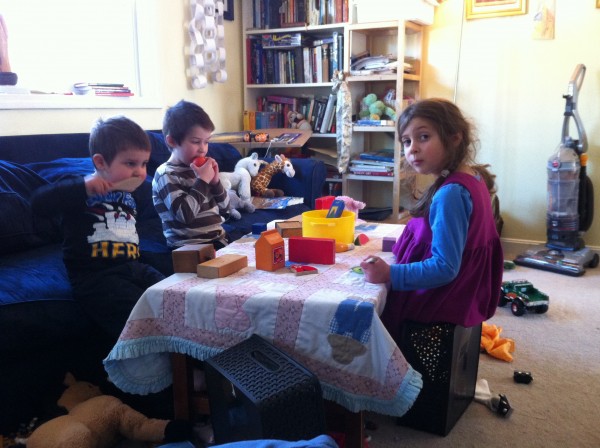 I’m not even sure any longer when exactly I snapped this picture. At some point Sophie, Ben, and Anthony set the table and had a party. Maybe when they got too muddy and cold?