Making a Clean and Quiet Space

This week Leila’s Master Bedroom Challenge didn’t grab me. My bedroom definitely needs a little something; but the first step is moving a bunch of stuff out to the shed and I wasn’t up for that. So I decided to sit it out. Plus trying to do anything at all just seemed too overwhelming.

Then Dom decided that on Saturday he wanted to move the television out of the living room and into the office. It wasn’t a spur of the moment decision. We’d talked about it a few times. When we watch shows after the kids in bed we’ve had to wear headphones or watch on the computer screen in the office because the sound of the tv wakes Anthony, whose bedroom abuts the living room. On Sunday afternoons when Dom wants to watch the football game it drives me crazy because the game just sounds too loud, lasts too long, and in our small house there is nowhere I can go to hide from the sound. But with the television in the office, the sound is much more muffled and the office is at the other side of the house from the bedrooms. 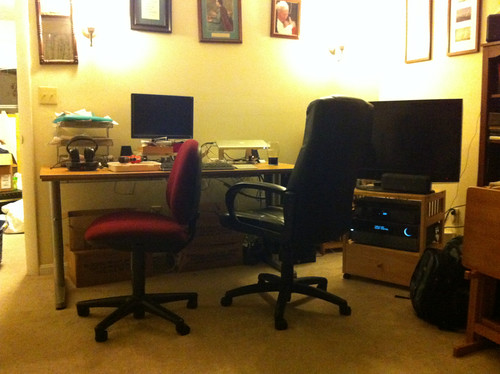 The television in its new home in the office, next to the desk.

The only reason this solution didn’t occur to us before is because there was no room in the office for the television. Until we moved a bunch of the book shelves to the living room. Then we could push the desk against one wall of the office and put the television in the corner. 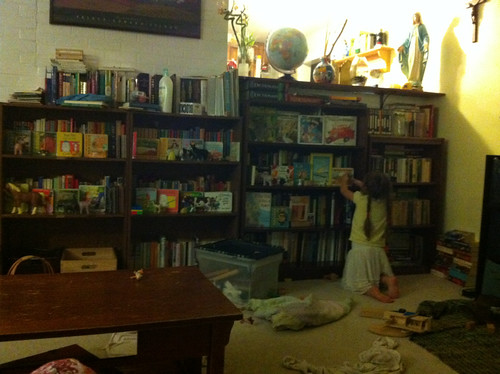 The bookcases, now in the living room, where the children are so excited to have more room for playing. Don’t you know that bookcases make excellent doll houses? Though here it’s a museum and the board books and picture books that are facing out are the paintings which the animals have come to view.

So we spent all Saturday afternoon taking dusty books off shelves, moving bookcases—two went into the living room, one moved to a different wall in the office, where a couple of small filing cabinets were holding a bunch of old papers that I decided I could get rid of or move. Goodbye filing cabinets.

It was hard work; but of course when you move furniture you end up dusting and vacuuming—or at least I do—once I had started doing all that, and arranging the books and tidying the shelves, then suddenly I found myself motivated to clean off my sewing table, which hasn’t been used in almost two years. I started that job on Saturday after the books were all moved and while Dom was hooking up the electronics. I finished it this afternoon. 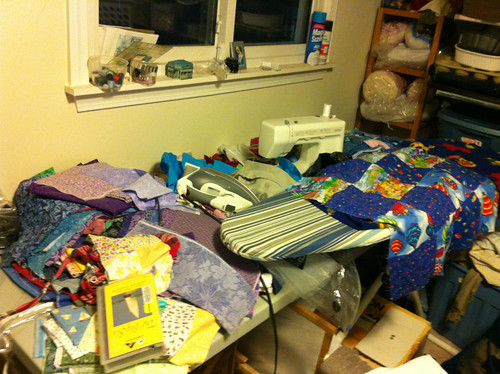 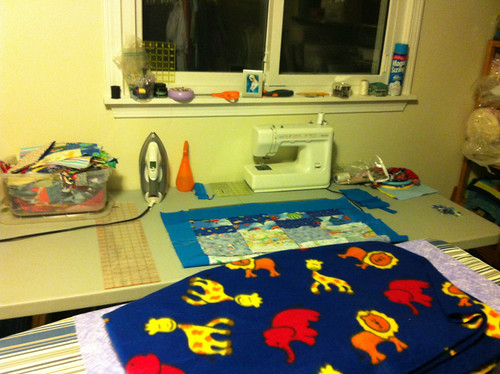 Sewing table, after. Oh so neat and tidy and clean too. That’s Ben’s quilt being pieced on the table and on the ironing board in the foreground is the fleece backing. He’s already in love with it. 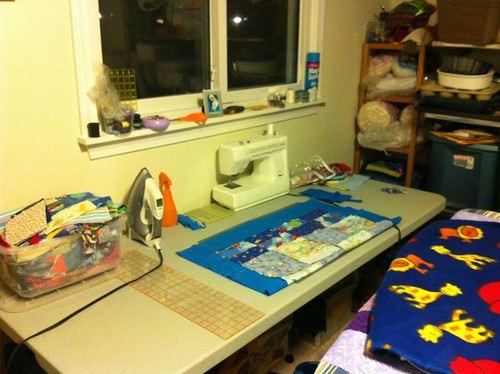 It’s amazing how quickly I was able to clear this off once I got going. Why did I wait so long?

And then today after Mass I cleaned off the shelf between the kitchen and the living room, dusting it, removing junk that had accumulated, throwing away some old candles that were just gathering dust. I cleaned off the shelf where the printer sits. I finished cleaning off my sewing table and while Anthony napped and Dom and the big kids watched the Patriots game in the office, I actually did a bit of sewing on the quilt I started for Ben almost three years ago. 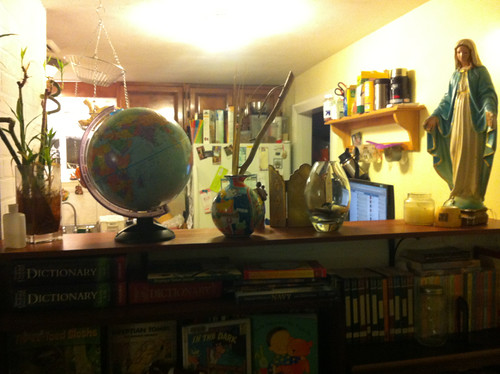 The shelf between the kitchen and living room. Dusted and decluttered. Now that the tv isn’t in front of this space, I can actually reach the shelf without crawling through a jungle of cords and cables. 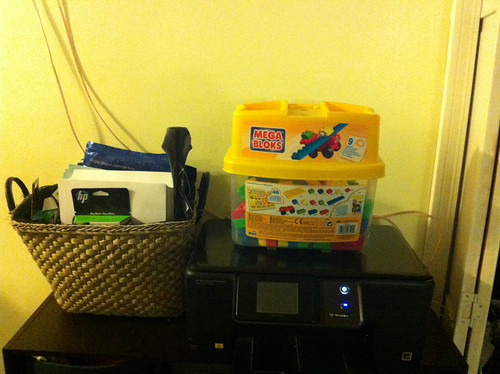 The printer shelf. I removed a huge pile of papers and other junk, put the printer paper and ink cartridges into the basket to keep them organized. The legos are up there to keep Anthony from throwing them around the living room. They are a “by request only” toy.

It’s funny how once you accomplish one big task and see one space open up and put in good order suddenly you want to do more and more and more. All those tasks which before seemed too big to even start now seem possible. Vacuuming always gives me a sense of profound accomplishment, of having restored order from chaos. Rearranging the furniture makes me feel like I’ve gained a new home. I would never have started this project had it not been for Dom, who wanted to give me the gift of a quiet Sunday afternoon while he watched the game. He gave me so much more, though. Now I think maybe it’s possible I can squeeze out the time between now and the end of the year to finish a few sewing projects. Maybe I can finish the quilts in progress for Ben and for Anthony. Who knows, maybe I can start one for Lucia too. And a couple of other small projects. Now that the work area is clean and not a big messy pile, I feel like I can sit down and sew for fifteen minutes, half an hour. What seemed impossible a few days ago now seems not only possible but imperative. And maybe that’s what I need, a way to accomplish something tangible, a work that doesn’t need to be done over again the next day like cleaning, laundry, cooking, and child care. A blanket that a little boy can wrap around himself and feel his mama’s love. (Sophie says that about the quilt I made for her, her “Flower Blankie:—it feels like getting a hug from me.) 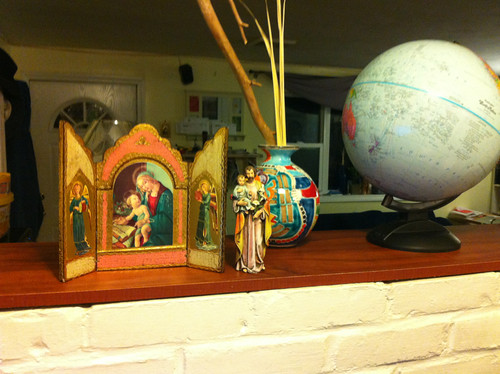 The shelf from the kitchen side. The Holy Family watching over me as I make my morning tea at the counter below.