I Love You, Lord, You Are My Strength: Benedict’s Birth (Part 2)
4 comments
Share:FacebookTwitter
BenedictLiturgy of the HoursmotherhoodPrayer

I Love You, Lord, You Are My Strength: Benedict’s Birth (Part 2)

Your Word Is A Light to My Path: Benedict’s Birth Part 3

The basic idea of lectio divina is to read the psalm or reading slowly and when a word or phrase catches you, you stay with it, savoring the meaning and using it as a way to more closely approach God. My heart is ready…. I didn’t feel ready. Not really. And yet I knew that I had to be ready for now was the time. I lifted my eyes from the words of the psalm to the crucifix on the wall at the foot of the bed, oh so grateful to be in a Catholic hospital with this beautiful reminder of my faith. I gazed at the all-too familiar form, seeking to enter in to the experience, to be ready as he was ready—ready to offer the sacrifice that the time required. I knew that readiness was not something I could achieve on my own. Instead I asked for the grace to be ready, the grace to make my suffering into an acceptable sacrifice and to be able to unite it with his, the grace that would make the trial I was dreading into something fruitful.

And then I moved on: My heart is ready, O God, I will sing, sing your praises. It seemed incongruous at first to move from my contemplation of pain and suffering to praise. ‘Wait!’ was my immediate reaction, ‘Wait I’m not preparing to sing songs of praise, I’m preparing to suffer!’ And yet that is the challenge, isn’t it, to allow even our experience of suffering to be full of praise, which is the essence of prayer. How am I going to get through this trial? By praising God at every moment, keeping my eyes fixed on the cross and allowing those graces to move through me. Full of praise and thanksgiving to Him who laid down his life for me. Thanksgiving for his wonderful love which allows me to share in his Passion. Yeah, easier said than done; but at least I had some idea that it could be done. I was determined that this birth would be closer to the prayerful sacrifice of Isabella’s than the anxious and unfocused experience of Sophia’s when I was so tired and frustrated that I really had a hard time entering into a prayerful state.

When the nurses finally returned to bring me to the OR I felt anything but ready. And yet I was determined to throw myself upon his loving mercy to help me to get through the ordeal. They helped me to sit up and draped a johnny across my back and then to stand up. Escorted by the two nurses, I walked the few yards down the hall to the operating room, trailing the iv stand behind me. Dom stayed behind in the room, waiting to be ushered in later after I was prepped for surgery.

I was grateful that the OR was not quite so cold as the OR at Salem hospital. Last time I shivered uncontrollably as the anesthesiologist bared my back to administer the spinal. I’d been dreading that cold and its absence was a pleasant sort of surprise.

There is no graceful way to climb up onto the operating table, but the nurse brought a stool, helped me up, and then stood in front of me holding my hands while I arched my back and moaned at the sting of the novocaine (I think that’s what they injected to numb the surface before the real injection). Because my back is already numb, the worst part of the spinal is just the anticipation and the fear. On this, the third time, that was considerably lessened. I almost didn’t notice the pressure as he inserted the needle and was surprised when he said it was over and I could swing my feet up onto the table (again, no easy graceful way for a nine-months pregnant woman to accomplish this maneuver.)

Perhaps this time the dosage was a bit different or something, while my feet and legs got warm and prickly, there wasn’t the incredible stinging with thousands of needles and the distress I felt as they grew heavier and heavier and I couldn’t shift them to make the stinging go away. I felt less alert to what was going on, tuned out the nurses’ chatter as they prepared everything. I kept clinging to my phrase, my heart is ready and that in turn opened the door to other phrases, other prayers.

One of the great fruits of praying the Liturgy of the Hours daily is that I have a great store of words and phrases stocked in my memory to draw on at a time like this. Previously I’d have been confined to praying Our Fathers and Hail Marys or trying to form my own extemporaneous prayers. Those were there too; but not my only resources.

I love you, Lord, you are my strength.,

You are my rock, my stronghold, my fortress: I stand firm.

In the shadow of your wings I take refuge.

Your rod and your staff give me courage.

God, come to my assistance. Lord, make haste to help me.

Your word is a lamp to my feet and a light to my path.

Lord, into your hands I commend my spirit

At first I battled the discomfort of the spinal taking hold, my body numbing below the chest, then the prep—you don’t actually lose all sensation below the spinal, you just lose all sense of pain. It is disorienting and uncomfortable still to feel touch and pressure and be unable to move or respond, unable to even exactly pinpoint where the sensations are coming from. The words of the psalms and other prayers helped me to direct my attention elsewhere. I took this time in the early stages of the surgery to focus on the various intentions for which I planned to offer up the ordeal.

It was oddly comforting to have my arms spread out and taped to arm rests on either side, laid out upon a cross. I found it so with Bella’s birth too. Very easy to unite my suffering to Christ’s when I’m on my own cross. With Sophie’s birth I only had my right arm stretched out, the left one was free and I held Dom’s hand and I missed the external mirroring of my internal reality.

Once Dom came in, he did grab hold of my hand and I held his tightly until he left to accompany Benedict to the nursery while they finished closing me up. As in the previous surgeries, I don’t know how I’d have managed without my husband next to me, his hand gripped a tightly as I could, encouraging me not so much by anything he said or did but by his strong comforting presence. He was my anchor and I couldn’t have done it without him. And oh to be able to share with him the joy of those first cries, his eyes watering just as mine did, to have his eyes see our baby even before mine could, reassuring me that all was well.

This isn’t coming as neat and orderly as I’d hoped. To try to piece together a chronological account of the surgery and where my mind wandered is really impossible. There was so very much pain and I coped with it when I could focus my mind by reciting prayers and holding tight to scripture, to images of Mary and to the cross. I prayed a litany of saints at one point, the Magnificat, the Benedictus and Nunc Dimittis, the St Michael prayer, all the various Marian prayers I know. At other times I know I lost all words and merely moaned and clung to Dom’s hand and could not think or know much of anything except the pain. Oh I did moan and groan! So odd to hear such sounds and know they were coming from me. They seemed both to come from the depths of myself and at the same time from somewhere completely outside myself. I was very much trapped in my body and the physical sensations and yet I was constantly reassured that I was not alone and that somehow there was something greater than the pain that made me able to do more than merely endure.

With the So-Called Sick 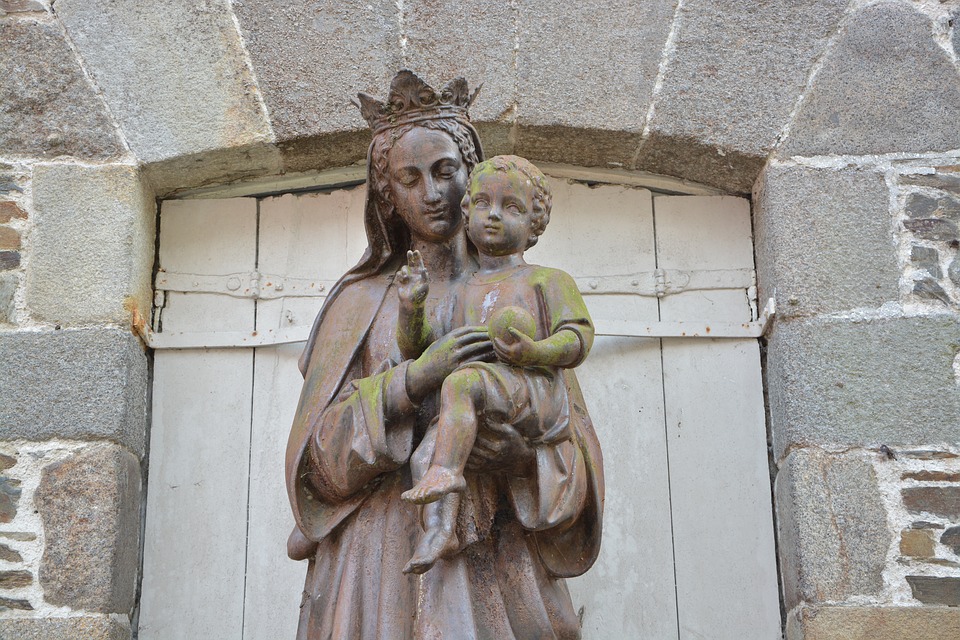 When the Holy Child Knocks

Hebrew Poetry and the Lord’s Prayer