It feels like I’ve been caught up in a fairy tale. Who could believe it? One minute our house is drowning– my sister told the kids that it was being attacked by water dragons. Wise sister, knows that fantasy can turn even the worst disasters into something that can be borne. Anyway, one minute we were squelching down the hallway, water oozing between the floorboards at every step and cringing at the sponge-like carpets and then watching the walls be cut away and discovering mold (and rat nests) in the walls….. and then here we are at a seaside rental house near White Horse Beach. Whisked away by a fairy godmother or a genie. (Though really, it was just helpful advice from a friend who suggested looking into rental houses instead of allowing ourselves to be shoved into a hotel and magical willingness onthe part of the insurance adjustor to consider the alternative; but I also suspect the hand of angels nudging things along….) 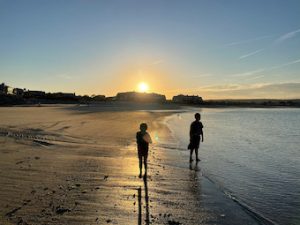 On Wednesday we descended upon the local library, just about a mile from the rental house. I had put a bunch of books on hold, 25 or so, mostly about local beaches, Cape Cod, and Massachusetts history. And then when we were there I discovered that their fairytale and folklore section had a bunch of books we’d never read. And of course the children each collected their own armfuls of treasures. One child discovered a bunch of Elephant and Piggie books that are new to us. Another found some Star Wars books. I handed the Phantom Tollbooth to a child I thought would enjoy it and scooped up a book about crows and one about the ocean. We walked out with more than 50 books! The bag I brought was filled to overflowing and the helpful librarians, who took the heaps of books in stride, filled four more paper bags– they were super cute paper bags with a Plymouth logo on them that had a lighthouse and the Mayflower and Plymouth rock and a whale, a turkey and a wigwam, and a lobster, an ear of corn, and decorative branches of cranberries and a sailor’s knot.

I’m hoping to find some treasures in my enormous haul of books. I’ve learned to cast my nets wide. Some of what I drag in will go unread, of course. Some of it won’t be worth the time. Some of it will be worthy but we will still not get to it. But hopefully there will be some books which will be new favorites and which will change our lives and put their mark on this mad off-season by the sea.

On Monday we went down to the beach at low tide and explored the tidal pools that I’d found on Sunday when I had a rare solitary stroll down the strand to the rocks at the foot of Manomet Point. On Sunday I’d found a pool with around three dozen hermit crabs scuttling around in it. On Monday the pool wasn’t there any more, but the kids diligently collected hermit crabs into the bucket we brought from the house (which is thoughtfully supplied with a shed packed with beach chairs and umbrellas, snorkels, boogie boards, flippers, pails, shovels, dip nets, a rolling cart with big wheels and realy everything one could want at the beach– as well as a big bucket of sidewalk chalk for non-beach days.) Ben was the best hermit crab hunter. Anthony was more interested in digging. Sophie and Bella soon got bored of tidepools and were acting out some scenes.

Oh yeah amongst my book-hoarde, I also checked out Pagoo, which we own but of course is packed away; because Lucy doesn’t remember it and because it is the BEST book about hermit crabs and tide pools.

I’m working to establish a good homeschooling rhythm. We aren’t squeezing in quite as much as I’d like. But then I want to leave room for walks to the beach and trips to the library and playing and relaxing. So math is being done now, most days, and copywork. And some stories in the afternoon, finishing some of the books we brought and now we will also be diving into some of our library books.

The two teens have decided on a routine of taking a walk to the beach after Bella finishes her school work for the day– around 4 o’clock. Today Lucy and I took a walk down after lunch. Yesterday, though, we took a turn around the neighborhood, going up the hill instead of down to the beach. There are so many cute cottages with dreamy gardens. There are some huge houses with balconies and towers, and some little tiny shacks. Some places which are clearly vacation homes, but some which seem to be lived in year-round. There’s one place around the corner with a big rock at the street that has a name painted on it in Gaelic: Caislean Gainimh, Sand Castle. I am charmed. Back in the day this stretch of shore south of Boston was known as the Irish Riviera.

House updates: We finally found a plumber. They can’t start work until November 8– unless something miraculously opens up before then. Which means since the contractor can’t really get down to work until after they finish, that we will be hear till mid-November at least. We are still hoping to be back home by Thanksgiving– though it would also be poetic to have Thanksgiving in Plymouth.

The rental house no longer smells like fabric softener and scented candles (which I packed away into the basement for the duration) but curry and cinnamon apples and all the other meals we’ve cooked and eaten in the almost-two-weeks we’ve been here. It’s strewn with stuff and looks much more lived-in and less like the pretty pictures on the website. What will we remember of this time years from now when we look back? Will it be endless blue skies, the roar of the surf, cozy afternoons with books, long walks, and full bellies and soft beds? I hope that all this goodness will blot out the stress of having to pack up and move, of our house becoming a construction site.

This week my box of bulbs came and we are going to have to go back to the house to plant them: tulips and daffodils, and crocuses. Bulbs are always a promise you make to yourself. They signify hope for spring and new life in the dull of autumn. It will feel weird planting beds and sewing seeds and bulbs in a house we aren’t currently residing in. But I’m looking forward to seeing all these flowers blooming after the winter’s cold. 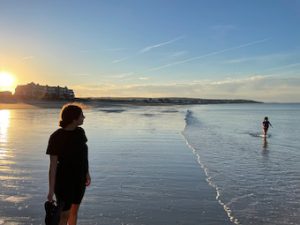 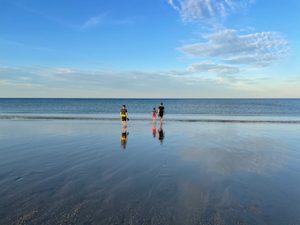