Ashes on a Wednesday

God of mercy! God of grace!
Hear our sad, repentant songs.
O restore Thy suppliant race,
Thou to whom our praise belongs!

3 Foolish fears and fond desires,
Vain regrets for things as vain:
Lips too seldom taught to praise,
Oft to murmur and complain;

4 These, and every secret fault,
Filled with grief and shame, we own.
Humbled at Thy feet we lie,
Seeking pardon from Thy throne.

This was the hymn for Evening Prayer tonight and oh that second verse especially zings me every time. Welcome to Lent.

We had a cranky morning but it had nothing to do with fasting. Actually this year fasting wasn’t so hard for me. I have no idea why. I had a couple large mugs of tea with sugar and half and half and told myself I’d have a snack when I got very hungry. And I never did. I almost mindlessly ate a handful of goldfish during stories, but caught myself. So I fasted until dinner and then ate a reasonable dinner: fish, salad, some leftover veggies.

We went to noon Mass at the pastoral center. The kids still remember when we used to go all the time when Dom worked there. Even though it’s crowded and we have to get there early to make sure we get seats, they still prefer it to daily Mass at the parish which is the school Mass.

Cardinal Sean said Mass, which was nice. Mass there always begins with the Angelus– a prayer I love though curiously I never encountered it until I was an adult.

His homily addressed the question of the apparent contradiction of receiving ashes while the Gospel cautions us against doing our works of prayer fasting and almsgiving so that other’s can see them. He talked about social climbing and the universal human temptation of wanting to be esteemed and admired and he alluded to the British comedy show Keeping Up Appearances and Hyacinth Bucket’s desire to be admired. But what we really should be seeking is God’s esteem and a relationship with God rather than the esteem of our fellow men. So sharing our struggles as an act of fellowship while we are all focused on God and at the same time witnessing our faith publicly is not necessarily the same thing as doing so because you want to be admired.

There wasn’t any music, but after communion the cardinal sang Sweet Sacrament We Thee Adore, which is one of my favorite hymns. Everyone sang along. It was beautiful. He also started everyone singing Holy God We Praise Thy Name as a recessional. Most of the time I prefer that sort of simple a cappella singing to accompaniment by piano or organ. Daily Masses with priests who sing are my favorite.

The kids and I are reading St Patrick’s Summer as our Lenten read aloud. We had the best conversation after we read our chapter. Sophie especially really loves talking about the big philosophical questions. She is so very aptly named. Bella says they make her head hurt after a while. She also often seems aptly named– my lover of beauty.

Today I read them Mary Oliver’s poem, Gethsemane. I really love the gentle meditation on sleep and wakefulness– all creation watching and waking.

I especially love that last stanza:

“Oh the dear bodies, slumped and eye-shut, that could not
keep that vigil, how they must have wept,
so utterly human, knowing this too
must be part of the story.”

It made me think of one of my favorite stained glass windows (at our parish church). Actually it’s not the whole window, but a detail from the resurrection. Under the feet of Christ a Roman soldier kneels, his sword held before his shield, his helmeted head bowed down. He’s asleep on duty, another watcher who has failed to keep his vigil. I don’t know why I love him so, but I find myself drawn to his figure. Maybe its his vulnerability, his frailty and fragility. He also reminds me of the images of the medieval knights keeping vigil over their arms. How many times has my own body given out, sleep overtaking me, even though I am bound to stay awake.

Ben drew two Star Wars scenes, one from Hoth of Luke fighting an ATAT and one from Endor of Ewoks taking down an ATST. They’re not very Lenten, but I love them very much. 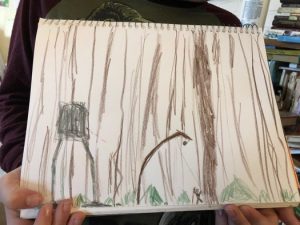 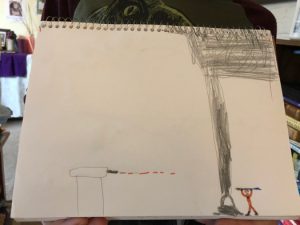