By Melanie Bettinelli on January 2, 2019 in books 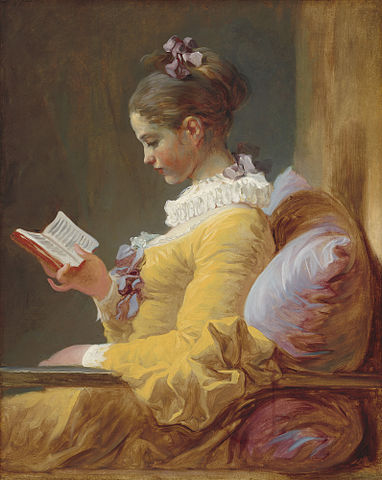 The Reader by Jean-Honoré Fragonard
via Wikimedia Commons

I finished 44 books this year and I started or made some progress on many more that I never finished. That’s not counting any of the books I read aloud to the kids, though I certainly thought about them and they do form a large part of my reading life these days. But I put them into a different mental bucket. Maybe I shouldn’t

I’d like to average a book a week, but my reading is really irregular. Some months I read only one or two books. One month I didn’t finish any. Other months I finished more than one a week. It depends what kinds of books I’m reading and how I’m reading them.

I like keeping count every moth. It’s reassuring to see that bottom line number and to say to myself: see, I’ve still got a life of the mind. I read and I write and I think. In the years when I don’t write a monthly books I’m reading list I start to feel listless and flabby.

So here’s a quick overview of what I read and liked this year.

Hands down my favorite work of fiction this year was Green Dolphin Street by Elizabeth Goudge. Such a beautiful story of redemptive grace and self sacrifice in marriage that I think was one of the truest books I’ve ever read about the sanctification of married life.

I also loved The Borrowed House by Hilda van Stockum, a juvenile novel about the German occupation of the Netherlands in WW2. A beautiful story for young readers about how love and friendship can help people to come to know the truth even when they’ve been taught lies and a warped worldview.

2. Meriol Trevor’s Shadows and Images, a historical novel about a woman who becomes Catholic and gets to know Blessed John Henry Newman.

4. Naomi Novik’s Spinning Silver —a gorgeous fairy tale retelling of the Rumplestiltskin story that reimagines the protagonist as a Jewish moneylender in a fantastical Russia.  I’m astonished, looking over my reading lists for the year, that I did not finish a non-fiction this year, though I started Salt and kept reading in several ongoing books like Hamilton. I think one of my goals for this year will be to read more non-fiction. And to finish a bunch of my in-progress books that I can’t seem to finish.

What were your favorite books that you read in 2018?

Here’s the complete list. You can click on the month name to see my short reviews of the books:

Nine books in one month. I love this series.

13. In This House of Brede by Rumer Godden

14. Lights in a Dark Town: A Story about John Henry Newman by Mariol Trevor

16. Shadows and Images by Meriol Trevor

17. The Samurai and the Tea: A Legacy of Japan’s Early Christians by Cathy Brueggermann Beil

18. The Endless Steppe by Esther Hautzig

19. Ready Player One by Ernest Cline

22. The Rose Round by Meriol Trevor

26. The Curious World of Calpurnia Tate by Jacqueline Kelly

27. Listen to the Nightingale by Rumer Godden

28. An Astronaut’s Guide to Life on Earth by Chris Hadfield

No books finished in June. I was reading Green Dolphin Street and East of Eden and finished both in July.

30. East of Eden by John Steinbeck

31. The Pearl Thief by Elizabeth Wein

32.Crossbows and Crucifixes by Henry Garnett

35. The Witch’s Brat by Rosemary Sutcliff

41. By What Authority? by Robert Hugh Benson

Books I read some parts of, but did not finish this year:

1. God in Search of Man: A Philosophy of Judaism by Abraham Joshua Heschel

2. He Leadeth Me by Walter Ciszek, SJ

4. The Reed of God by Caryll Houselander

7. Death of a Hornet: And Other Cape Cod Essays by Robert Finch

9. Stages on the Road by Sigrid Undset

11. Through a Screen Darkly by Jeffrey Overstreet

13. All Through the Night: Night Poems and Lullabies edited by Marie Heaney

14. The Italian Story by Geoffrey Trease

23. The Bear and the Nightingale