Homeschool Books That Are Working for Us
2 comments
Share:FacebookTwitter
booksHome schooling

Homeschool Books That Are Working for Us 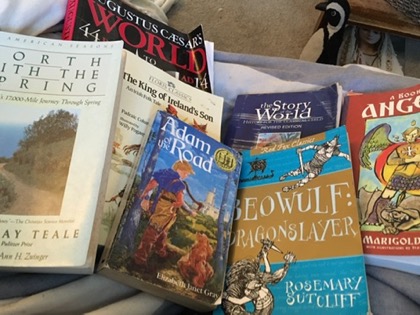 I’ve successfully established the habit of writing weekly learning notes (eventually, not in a very timely manner but eventually) and recording what I read for my own pleasure and edification; but I haven’t been very good at a regular, more detailed discussion about the books I’ve reading aloud to the kids. That’s an oversight I want to work at correcting. In my learning notes posts I mainly mention the names of what we are reading, but rarely discuss what I like about various books. So here you have my attempt to talk about the what and the why of our recent and current crop of read alouds. It’s not an exhaustive list of everything we’re reading, but something off the top of my head, a handful of books I’ve really been enjoying reading with the kids, that are particularly interesting and well written and worth talking about and recommending to others.

What was the world like during the lifetime of Rome’s first emperor? This book is both broad and deep, the reader is immersed in the daily life of Rome, introduced to the Roman calendar, and the Roman gods. But also to the other lands and peoples both within and without the Roman empire. What about the rise of Herod the Great and the building of the Temple in Jerusalem? The deaths of Antony and Cleopatra? Following young Octavius Caesar into battles, skipping across the Atlantic to learn about the Mayans and then across to the far side of Asia to learn about China and Japan. The poet Virgil and his great work The Aeneid, the poet Ovid, the geographer Strabo…   Rich in detail and with an engaging style and told by an author who clearly enjoys her subject matter, this book has become a family favorite and a most-requested book (Even the five year old asks for it.) So even though we were supposed to be focusing on the Middle Ages this terms, we’ve still got one foot firmly planted in Ancient Rome. Sometimes it’s good to just stick with a book because it’s excellent and everyone loves it, even if it doesn’t quite fit in with what you thought your plans were.

2. North with the Spring by Edwin Way Teale

I don’t remember how I stumbled across this book on Amazon, but I was enchanted by the description of the author and his wife setting out to follow the spring as it spread across the eastern seaboard of North America. Beginning in Florida well before the equinox, they crisscross the country across to Louisiana and then back through Georgia to Florida again and back and forth until they end in Canada at the summer solstice. Teale’s language is lyrical and his knowledge of natural history is encyclopedic. He discourses on bald eagles, floating islands, rattlesnakes, birds of every kind, flowers, trees, plants, rivers, marshes, swamps… And the people. He and his wife meet experts in many fields, guides who take them far off the beaten path by boat and plane and truck and car. This is not a children’s book, but the children have been spellbound, though there are also stretches that don’t hold their attention as well. I picked this one especially for Bella, my budding naturalist, and have enjoyed sharing it with her very much.

I have loved Rosemary Sutcliff’s historical novels set in Britain— Bronze Age Britain in Warrior Scarlett and iron age in Sun Horse Moon Horse; Roman Britain with Eagle of the Ninth, Silver Branch, and The Lantern Bearers and Mark of the Horse Lord; Norman Britain in Knight’s Fee. Also her retelling of the Iliad—Black Ships before Troy. So I wasn’t at all surprised at how good her retelling of Beowulf for children is. She keeps much of the flavor of the poem’s language and spins the story into a great yarn, quite enchanting for children.

4. The King of Ireland’s Son by Padraic Colum

A retelling of Irish folk tales by the poet Padraic Colum, who was a contemporary of Yeats and Lady Gregory and one of the great leaders of the Irish Literary Revival. It’s been delightful to share some of my love of Irish literature with the children, who all enjoyed Colum’s retelling of The Golden Fleece.

The King of Ireland’s Son is a complicated story with stories within stories, one of the most complex-plotted tales I’ve ever read. I still am not sure I followed all the twists and turns of the story; but we definitely enjoyed every one of them. Very often I had to read a little more because the children couldn’t bear not to know what happens next. There are beautiful princesses, giants, robbers, monsters, evil enchanters, wise women, helpful animals, a stolen child, a magic tree, all the fairy tale tropes you can imagine in a delightful Irish style.

5. Adam of the Road by Elizabeth Janet Gray Vining

The son of a minstrel in 13th century Britain, eleven year old Adam feels more at home on the road than when under a roof. He is separated from his father and his dog and goes off on his own to search for them. Adam doesn’t always have great judgment about people and situations; he’s young and, for all his worldly experience on the road, still rather naive. Nothing terrible happens, but there are opportunities to talk about his choices and whether they were good ones and why he made them.

Many of the songs that Adam sings are ones I recognize from the medieval poetry class I took in college. We had fun listening to versions of Loud Sing Cuckoo on You Tube.

A delightful fantasy novel full of the trappings of fairytales, which are often cleverly subverted. Sophie Hatter is the oldest of three sisters and her father is dead and she lives with her stepmother. Well, then, it’s certain she will never have any kind of adventures or find her fortune— the oldest never does, Sophie reasons.Sophie finds herself the hapless victim of a spell and moves in with the wizard Howl—and his apprentice Michael and his fire demon, Calcifer— in the moving castle of the title. Despite her curious lack of self confidence and self awareness, Sophie proves to be a remarkable heroine who is not daunted by wizards or kings— though she is terrified of a scarecrow.

Everyone kept telling me I needed to read Howl and yet for some reason I put it off. LAst year I finished it and handed it to Bella who handed it to Sophie. When we needed something to read for bedtime stories while in Texas, Howl was the logival otion. We’ve been reading this together as a family since December and it’s very much a favorite with everyone.

7. A Book of Angels: Stories Of Angels In The Bible by Marigold Hunt

I love all of Marigold Hunt’s books, but this one seems to be rather overlooked on the homeschool curricula. It retells salvation history in the Old and New Testaments by way of recounting encounters with angels. From the serpent in Genesis who is really a fallen angel, through St John’s visions of angels in the book of Revelation. I love this book for when you hit the stage where you’ve read all the children’s picture Bibles more times than anyone can stand but the children are still a little young for the adult Bible. Hunt’s narrative fills in the context and makes the Biblical stories more accessible to young readers— and are rather helpful for some older readers as well.

8. Secrets of the Universe: Discovering the Universal Laws of Science by Paul Fleisher

A good intro to physics book. Sadly, it’s out of print and it’s almost impossible to find copies. They’ve reissued it broken up into smaller books by topic, but buying all the smaller books is a rather hefty chunk of change, as much really as buying a fabulously expensive copy of the original, really. (Objects in Motion, Liquids and Gasses, Matter and Energy, Waves, Relativity and Quantum Mechanics). So we keep getting this out of the library and reading a chapter here and there. Anthony and Bella seem more interested than the others, but it’s had at least a little something for everyone so far.

9. A Doorway of Amethyst by Mary Daly

Since we went on our geology fieldtrip last fall there’s been a surge of interest in the topic. Although this book was recommended for sixth grade and as a challenging read for that level at that, I thought Bella, who tends to be pretty strong in science, would be able to handle it. And I thought the others might glean something from it as well. So far we’ve liked the readings that we’ve done. I like the strong Catholic perspective which sees science and faith as not in contradiction (it’s overt in the text, but not overwhelmingly so.) I liked the inclusion of a snippet of poetry in the first section— here is a mind that’s on my wavelength! And the observation that mineral guide books present you with pictures of pretty minerals that don’t share much resemblance at all with the rocks you’re apt to find when you step outside your door. So far I’d say it’s challenging but worthwhile. We’re certainly none of us getting as much from it as we possibly could— even I fee like I’m missing some things. But I’d rather have a book a little beyond my grasp that forces me to stretch than something that’s too basic and doesn’t challenge us at all.