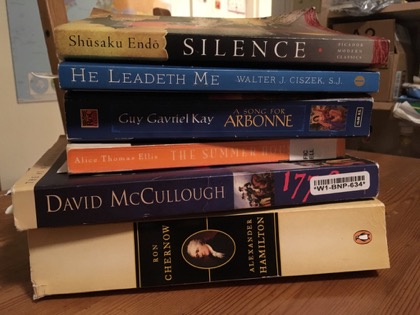 1. The Summer House: A Trilogy by Alice Thomas Ellis.

I read this fascinating article about Catholic novelist Alice Thomas Ellis, who i’d never heard of before. It piqued my interest and I checked our library network to see if they had any of her works. They had The Summer House, so I put it on hold.

I vaguely remembered watching a movie version of the novel years ago. I didn’t really remember any scene but the climax. The events of the movie do stick fairly close to the novel, but it doesn’t give you much of a sense of the structure of the novel or its real interest.

The novel is in three parts, each one a sort of novella that could be a stand-alone story, and indeed they were originally published separately in 1987, 1988, and 1990. But it makes sense to consider them as one work because of their essential unity for they tell one unified story, rather like the three parts of Rashomon where you see the same event three times from the point of view of three different narrators. Each of the three novellas tells essentially the same chain of events, but each character sees them very differently, of course.   The Clothes in the Wardrobe is narrated by nineteen-year-old Margaret, who seems like an animal trapped in a cage, strangely without agency, listless and despondent about her upcoming marriage to her forty-year-old neighbor, the playboy and ladies-man, Syl.
The Skeleton in the Cupboard: is narrated by Syl’s mother, Mrs. Monro, who spends much of her time reminiscing about her life and thinking about death. She seems ill at ease with her son, she loves him but she doesn’t seem to like him very much. And she doesn’t seem to know quite what to make of the marriage.

The Fly in the Ointment is narrated by Lili, a friend of Margaret’s mother, Monica, who went to school with her in Egypt. Her father was Egyptian but her mother was english. She’s very Bohemian and a sort of stranger, not fully at home in Egypt, but definitely an outsider in England. She’s selfish and a serial adulterer and yet she’s also in some ways the most self-aware of the three.

Together they tell a rather dark story which ends with a sort of tragi-comedic redemption where an act of adultery is strangely a sort of selfless act that rights a wrong.

i’m still not quite sure what to make of this quirky work. I feel like there’s a lot to unpack and some subtleties I missed that would help me to see the thing I can almost see but not quite. But I do look forward to reading more Ellis.

Well, if you’ve been reading my blog as all, you’ll know that I re-read this book and you’ll be aware that writing about it has dominated that later part of September and into October. No sense in spilling more words here.

Jason is a friend from college and I spotted this novel at the library and grabbed it, remembering I’d been intrigued by an interview with him that I’d read in which he said he wanted to write a Young Adult novel in which vampires are the bad guys and the vampire hunters are the good guys. I remembered that Jason was fascinated by classic horror like Dracula. I think my friend Stephanie and I watched Bram Stoker’s Dracula with him in the dorm one night.

Alex Van Helsing is a juvenile novel that introduces a new vampire hunter, a descendant of Stoker’s Van Helsing. The novel takes place at a boarding school in Switzerland, not far from the castle where Mary Shelly famously conceived the idea for Dracula while telling scary stories with Lord Byron and Polidori and others. This castle, of course, plays a role in Alex’s adventures and Shelly’s novel provides some important clues.

Henderson plays delightfully with some of the tropes of the genre, telling a fast-paced action story. I like the fact that in his universe the vampires are most definitely the bad guys and Alex and his friends are most definitely the good guys. Much YA fiction lacks moral clarity but Alex Van Helsing inhabits a universe where I feel at home. I look forward to reading the sequels.

A fun historical fantasy set in Victorian London, follows the adventures of Dodger, a rather Dickensian character who romps through a Dickensian London and even befriend the young reporter Charlie Dickens. But he isn’t exactly Dickens’ Artful Dodger, he’s a much more complex character and he definitely has a very Pratchett sort of twist to him. Dodger makes his living picking up coins and jewelry and other oddments that have made their way into the London sewers. A somewhat unsavory occupation, but not unskilled. He lives on the margins, but when he rescues a young lady in distress he finds himself swept up in events that have him moving at the very highest levels of society. London is very much a character in the novel.

1. A Song for Arbonne by Guy Gavriel Kay

One of my less favorite Kay novels. A friend mentioned she was reading it so I picked it up, but I might not finish the re-read. It’s not grabbing me right now. But then again I might as nothing else is grabbing me either.

2. He Leadeth Me by Walter Ciszek, SJ

I love this book so much, but I needed to pause after a bit to let it sink in. I don’ t want to race through it. And my Silence re-read sort of interrupted things.

I’ve been meaning to read this for a while, but promised myself I’d finish John Adams first since I already had it. Adams done, I’m now moving on to his rival, Hamilton. They were not friends though they were sometime allies. It’s fun to look at the Revolution from a different perspective.

I began reading this at the lake this summer, picked it up off the shelf of the house where we were staying. I liked it so bought a copy for myself. Sort of odd to read it alongside Hamilton, but the focus is very different, very narrow. It literally looks at the events in the first year of the Revolutionary War, the year of the Declaration of Independence. So far as I’ve read the focus is mostly on Boston, of course, since that’s where things began. So for me at least this first part of the book is very much local history.

My other books have gone to the far back burner and haven’t been opened all month as far as I can recall.