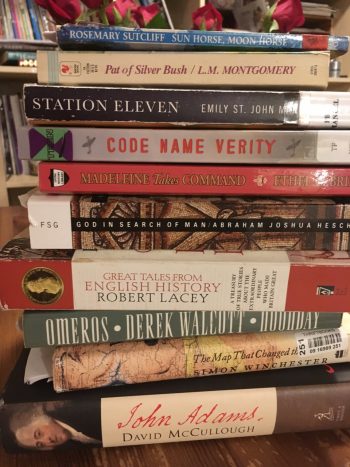 I brought this one along to read at the lake house because I knew with hours of reading time, I’d quickly move beyond my carefully paced reading in all my ongoing books. I was right and it was delightful to lose myself in a Pratchett romp for a couple of days.

It’s been a long time since I read this one and I’d forgotten most of the details. Now I think I need to keep going with the Watch series.

2. Venus in Copper by Lindsey Davis

I was on a Lindsey Davis kick many many years ago, post college maybe. This one was on the shelf at the lake house and after I finished my Pratchett I picked it up, knowing I’d be able to finish before we left with no problem.

I’d forgotten how thoroughly enjoyable the Marcus Didius Falco mysteries are. Also, I looked them up and realized how very many more there are now than when I was reading them from the library years ago. Someday I need to re-read the whole series, I think.

Falco is a hard-boiled detective in Imperial Rome. Sometimes he works as a private investigator, sometimes as an informant for Emperor Vespasian. He’s dating a smart senator’s daughter, Helena Justina, and they make a fabulous pair. Not really safe for kids as there are quite a few adult themes; but really fun for mature readers. I’d probably let an older teen read them.

Melissa Wiley mentioned this one on social media and in such a way that it intrigued me. I put it on hold at the library and devoured it, knowing nothing at all about the book before I dove in. I do like it when I can manage that. It’s so much more fun to go on a journey where you’re trying to discern the shape of the journey only from the text itself.

Parts of the story reminded me of S. M. Stirling’s Dies the Fire and sequels, but where Stirling’s post-apocalyptic books are clearly meant to have been a series from the start, Station Eleven is a stand-alone literary novel and has the structure that goes with that. Its plot and themes are tight, orchestrated, there’s a network of characters who all connect together in surprising ways. The careful use of Shakespeare worked very well as did the graphic novel that one of the characters writes and another reads.

I feel like I can’t say too much without giving too much away, but I really liked this one. Maybe it deserves a spoiler-y review post of its own where I can dig in. But I’m not sure whether I have the time. I’m sort of backlogged when it comes to book blogging, with a large handful of posts I can’t quite seem to get around to putting the finishing touches on.

Station Eleven does get dark, very dark in places, as one would expect in a post-apocalyptic novel, though the worldview is ultimately one of hope. Standard contemporary YA fare in that I wouldn’t give it to a younger teen. Emphasis very much on the *adult*.

I’ve seen this novel recommended in several places, but it was Leah Libresco’s recommendation that put it on my wish list. (Ahem, sorry, that’s Leah Sargeant now. Old habits are hard to break.) Took me a while to get around to it, but this was a perfect summer reading book and not a bad follow-up to Station Elven, though they are very different novels both in genre and style. However, there was a similar intensity such that they paired together nicely. (I think I’ll never be able to untangle them in my head, they’ll always be an odd pair.)

It’s hard to know what to say about Code Name Verity without giving away key elements of the plot. I knew nothing about it going in except that it was a WW2 book and had something about spying and being in occupied France. And really, I love reading books that way. I love going on the journey with no idea where it’s taking me. So I hate to accidentally spoil someone’s reading experience because the things about this novel that I most want to talk about are all so very spoiler-y. Maybe I need to write a separate book review with spoiler warning.

My friend Rebecca was talking about the Pat books recently with great love, but I couldn’t remember them hardly at all. I’d only read them once, years ago, and they didn’t make a great impression at the time. So I decided to re-read slowly to see what I had missed in my first galloping read.

Pat is different from Montgomery’s other heroines—Anne, Emily, Jane— in that she has a stable home with two loving parents. In fact stability is Pat’s great characteristic. She loves her home, Silvery Bush, with such devotion that an uncle jokes that it isn’t a home to her, it’s a religion. She wants it to never change. She is almost undone whenever even a tree is cut down, much less when her sister is married or her brother runs off to sea. Instead, the almost-unloved orphan child in Pat’s world is her best friend, Jingle, who lives on the next farm over. He’s being raised by an aunt and uncle because his very shallow and unloving mother has remarried and lives with her new husband far away. It’s interesting to see how Montgomery’s shifting of that orphan character from protagonist to supporting role changes the dynamic of this story.

Impossible to write about Pat without also mentioning the delightful Judy Plum, the Irish cook who seems often to be more of a mother to Pat than Pat’s own mother, who is always something of a shadowy figure in the background, loving but frail, needing to be cherished and protected rather than the one doing the protecting. Judy is a great storyteller, fully of homely advice and always ready with a comforting hot snack.

I’m in the home stretch now, less than a hundred pages to go. I should be finished well before the end of July. I’ll be sad to leave Adams behind when I’m done, but am looking forward to diving into the biographies of other founding fathers. I feel like I could at the beginning of a multi-year, multi year streak. History was never really my subject in school. I didn’t hate it, but I was never really fed great stories either. It was interesting in a dry sort of way. Now I’m teaching it and realizing how many great books are out there that teach the human stories of history. How much I’ve missed! I’ve got so much lost time to make up for!

A juvenile historical novel about a 14 year old French girl in Canada who literally holds down the fort against Indian attack while her parents are away. Bella loved it and I’m pre-reading it to decide if I want it to be a family read-aloud or not.

3. The Map That Changed the World by Simon Winchester.

A fascinating story about William Smith, the geologist who made the first geological survey and map of England. This and the John Adams are the two books I’m reading almost every night. Just a short section as I’m getting ready for bed.

I’m getting bogged down and have lost momentum. Not because I don’t like the book, but I’ve got a lot of books going and this one demands more. When i’m tired the poetry gets pushed back. And I feel like I really want to re-read a bunch of sections because I read them too fast. But I’m still loving the lush poetry and imagery even when I do get lost. It’s a pleasant place to wander aimlessly.

This is a book that comes with me to the doctor’s office. That I grab at lunch when I want something interesting to read don’t want to get lost in a book. The chapters are short and I can finish one in less than 20 minutes. But they’re really delightful, and good to chew on and think about afterward. And sometimes to read to the kids (skipping over some of the more juicy bits that aren’t quite child friendly.)

6. God in Search of Man: A Philosophy of Judaism by Abraham Joshua Heschel

I really am loving this book. I want to transcribe and post a quote from just about every section that I read. But. . . it’s the kind of book I can only read when I’m awake and alert. It cannot be slotted in just before bedtime or when the kids are likely to interrupt my reading. I find myself grabbing it for a midday break outside in the sun or it comes with me in the car when I know I’m likely to have a few minutes of downtime. Like today when I knew we were heading to the coffeeshop where I’d sit in the car with the girls while Dom and the boys ran in to get coffee and cookies.

I’d love to read this with a group. It almost demands to be discussed. But I don’t have anyone to talk about it with. Though I do sometimes tell Dom about what I’ve been reading and we chat about it.

A historical novel set in ancient Britain, the plot revolving around the The Uffington White Horse. I’ve only just read the first chapter of this one, but I’m looking forward to diving in more deeply. So far it feels like the same milieu as Warrior Scarlett.